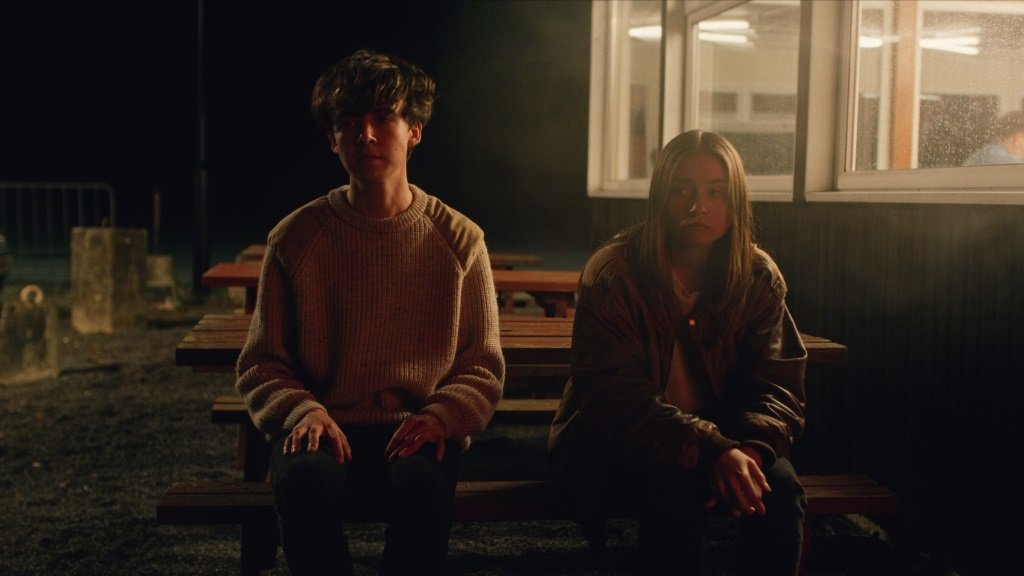 Alex Lawther and Jessica Barden play high school misfits who hit the road in The End of the F***ing World: Season 1, a dark comedy of teen confusion from Great Britain.

“From its title to its central conceit – a self-declared teen psychopath and his foul-mouthed potential victim run away together – the series is decidedly out of the box, seemingly more suited to the edgy comic-book medium it’s adapted from,” writes Kelly Lawler for USA Today. “But hey, it’s here, it’s weird, and it ends up being really wonderful.”

It debuts on the U.S. on Netflix. 8 episodes now streaming.

HBO launches 2018 with the entire cinematic Harry Potter saga: all eight films based on the books by J.K. Rowling, from Harry Potter and the Sorcerer’s Stone (2001, PG) through Harry Potter and the Deathly Hallows – Part 2 (2011, PG-13), available to binge or watch at your leisure on all HBO streaming platforms. Reviewed on Stream On Demand here.

Vince Vaughn reaches deep into his inner thug in Brawl in Cell Block 99 (2017, not rated), a visceral yet grounded prison thriller and my pick for the smartest piece of cinematic pulp fiction in 2017. Now streaming on Amazon Prime. Reviewed on Stream On Demand here.

Emma Stone and Steve Carell play Billie Jean King and Bobby Riggs in Battle of the Sexes (2017, PG-13), the story behind the legendary tennis match of the 1970s and a look at a defining public moment in the equal rights movement. Also on DVD and Blu-ray.

Also based on a true story are American Made (2017, R), with Tom Cruise as a pilot flying weapons and drugs for the CIA in the 1980s, and Breathe (2017, PG-13) with Andrew Garfield as Robin Cavendish, the man who revolutionized the way polio patients are treated. Also on DVD and Blu-ray.

Johnny Depp sails the haunted seas once again as Captain Jack Sparrow in Pirates of the Caribbean: Dead Men Tell No Tales (2017, PG-13), the fifth film in the franchise based on a theme park ride. Javier Bardem joins the cast on this cruise and Paul McCartney gets celebrity cameo duty.

Kate Bosworth and Thomas Jane star in the horror film Before I Wake (2016, PG-13), which makes its US debut on Netflix.

Christian Bale is the Dark Knight in Batman Begins (2005, PG-13), the first film in Christopher Nolan’s superb superhero trilogy, but for nostalgia you can rewind back to Tim Burton’s Batman (1989, PG-13) and Batman Returns (1992, PG-13) with Michael Keaton.

Mel Gibson and Danny Glover play good cop-crazy cop (you know which is which) in the buddy cop action hit Lethal Weapon (1987, R) and the three sequels.

Foreign affairs: Age of Shadows (South Korea, 2016, not rated, with subtitles) is a spy thriller set during the Japanese occupation of Korea. Reviewed in Stream On Demand here.

Kid stuff: Gene Wilder invites you into a world of pure imagination in the original Willy Wonka & the Chocolate Factory (1971, G) and the animated Monsters vs. Aliens (2009, PG), well that’s pretty self-explanatory.

Shut up and dance: We Speak Dance (2018) is a 5-episode series that travels the globe exploring the way move to music. On the fictional side of things is the Australian musical comedy Strictly Ballroom (1992, PG), the cheerleader competition comedy Bring It On (2000, PG-13), and Rent (2005, PG-13), the big screen version of the hit Broadway musical.

Jerry Seinfeld launches the new season of his interview series Comedians in Cars Getting Coffee on Netflix, which also picks the earlier episodes that originally streamed on Crackle.

Revisit the final adventures of Peter Capaldi in Doctor Who: Season 10 (2017) before the new Doctor takes charge of the TARDIS.

The 2018 Rose Parade Hosted by Cord & Tish features Will Farrell and Molly Shannon goofing it up as your hosts and commentators.

Robert Redford gives a nearly wordless performance in the survival drama All is Lost (2013, PG-13) (Amazon Prime and Hulu).

Paul Thomas Anderson wrote Punch Drunk Love (2002, R) for Adam Sandler and directed him to one of his best performances. Reviewed on Stream On Demand here.

Tom Hanks gets top billing in A League of Their Own (1992, PG) but Geena Davis is the real star of Penny Marshall’s film about the real life All-American Girls Baseball League.

Mel Brooks spoofs the “Star Wars” franchise with Spaceballs (1987, PG), which just might entertain the new generation of young fans.

Arnold Schwarzenegger goes to Mars in Total Recall (1990, R), a sci-fi thriller directed by Paul Verhoeven, but long before he was an action superstar, Arnold starred in the goofy comedy Hercules in New York (1970, G).

Guy Ritchie adds monsters to the great British myth in King Arthur: Legend of the Sword (2017, PG-13) starring Charlie Hunnam. A little closer to home is the western In a Valley of Violence (2016) with Ethan Hawke and John Travolta.

Among the older films now available on HBO streaming services are The Informant! (2009, R) with Matt Damon, the modern romantic comedy (500) Days of Summer (2009, PG-13) with Joseph Gordon-Levitt and Zooey Deschanel, and the Back to the Future trilogy (1985-1990) with Michael J. Fox.

Kid stuff: for the younger crowd are the animated features How to Train Your Dragon (2010, PG) and Shrek Forever After (2010, PG) and the partly-animated Cats & Dogs: Revenge of Kitty Galore (2010, PG).

Arriving Saturday night is the young adult romantic drama Everything, Everything (2017, PG-13).

Michael Fassbender and Alicia Vikander star in the literary tearjerker The Light Between Oceans (2016, PG-13) and Alone in Berlin (2017, R) stars Brendan Gleeson and Emma Thompson as Germans defying Hitler in 1940 Berlin.

Also new: Terrence Howard stars in Pride (2007, PG) based on the true story of an urban swim team in 1970s Philadelphia.

FilmStruck’s director of the week is Frank Borzage and the collection includes the silent romantic drama Lazybones (1925, silent with musical score), the gloriously romantic History is Made at Night (1937) with Jean Arthur and Charles Boyer, and Strange Cargo (1940) with Clark Gable and Joan Crawford.

If you’ve a taste for crime cinema, queue up the French neo-noir Serie Noire (France, 1979, not rated, with subtitles) or Fernando Di Leo’s Milieu Trilogy, three mob movies from Italy (reviewed on Stream On Demand here).

The documentary Winnebago Man (2009, not rated) profiles Jack Rebney, who became a YouTube phenomenon known as “The Angriest Man in the World” when invective-laced outtakes from a Winnebago sales video went viral.

New to the Criterion Channel are Billy Wilder’s The Apartment (1960) with Jack Lemmon and Shirley MacLaine, Otto Preminger’s classic courtroom drama Anatomy of a Murder (1951) with James Stewart, and the Coen Bros.’s Oscar-winning thriller No Country for Old Men (2007, R).