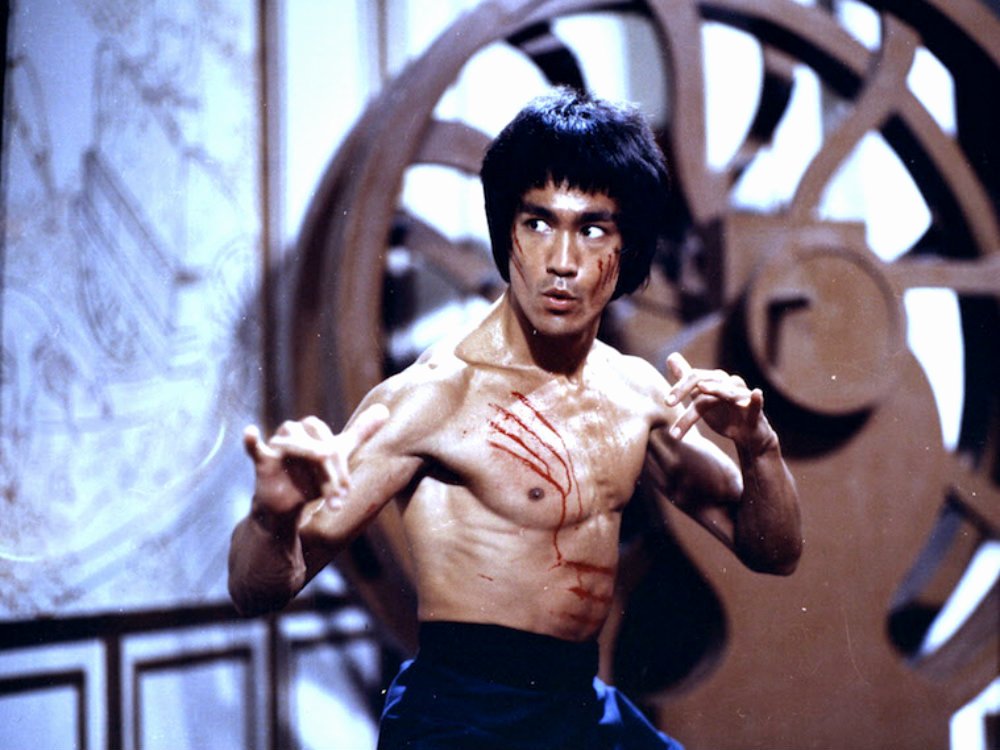 Enter the Dragon (1973) – After years of supporting roles in Hollywood, American citizen Bruce Lee became a star in Hong Kong with a handful of hard-edged martial arts thrillers. He returned to conquer his adopted homeland with this American/Hong Kong co-production, a glorified B-movie mix of kung-fu fighting (choreographed by Lee himself) and James Bond intrigue (the plot has more than a passing resemblance to Dr. No) elevated by the charismatic presence and graceful but deadly moves of the lean, wiry martial arts master.

Lee stars as a British agent sent to compete in an international martial arts tournament sponsored by a bloodthirsty Asian crime lord Han (Shih Kien), using his cover to infiltrate the criminal empire. The Americans were apparently worried that an Asian unknown could carry a Hollywood film so actors / champion martial artists John Saxon and Jim Kelly were cast as maverick American competitors, but Lee is the show here. Director Robert Clouse uses the tournament setting to fill the film with a roll call of martial arts styles and he ends the film with twin spectacles: a huge free-for-all battle outside, while Lee takes on the claw-fisted Han in a brutal one-on-one battle in a hall of mirrors battle. Lee narrows his eyes and tenses into a wiry force of sinew, speed, and ruthless determination.

Enter the Dragon kicked off the worldwide martial arts movie craze and made a legend of Bruce Lee, who sadly had little time to use his newly minted fame to make his dream projects. He died before finishing his next film, Game of Death.

Leaves Netflix at the end of June. Add to My List

On Blu-ray and DVD from Warner Bros. A remastered Blu-ray edition was released in 2013 for the 40th Anniversary. The independently-produced film was not a polished studio piece, it was a little down and dirty and looked it. This transfer is bolder, brighter, and has more detail, but it is still a martial arts picture from 1973. The soundtrack is remastered in DTS-HD 5.1.

The Blu-ray includes three featurettes. The 26-minute “No Way as Way” features vintage interviews with Bruce Lee along with new interviews from the likes of Sugar Ray Leonard, George Takei, and Lee’s widow Linda Lee Cadwell. “Wing Chun” is a 20-minute introduction to the style martial arts that Lee first practiced, and “Return to Han’s Island” is a 10-minute tour of the film’s Hong Kong locations.

Both the Blu-ray and DVD editions feature commentary by producer Paul Heller, a collection of interviews with Linda Lee Cadwell, home movie footage of Bruce Lee working out, and five vintage Bruce Lee documentaries: “Blood and Steel: The Making of Enter the Dragon” (2004), “Bruce Lee: Curse of the Dragon” (1993) narrated by George Takei, John Little’s excellent feature length portrait Bruce Lee: A Warriors Journey (2000) and his earlier “Bruce Lee: In His Own Words” (1998), culled from archival interviews with Lee, plus the original 1973 promotional featurette.

Along with the video extras is a little booklet with excerpts and behind-the-scene photos from David Freidman’s upcoming book “Enter the Dragon: A Photographic Journey” and an envelope with postcards and other little collectables.