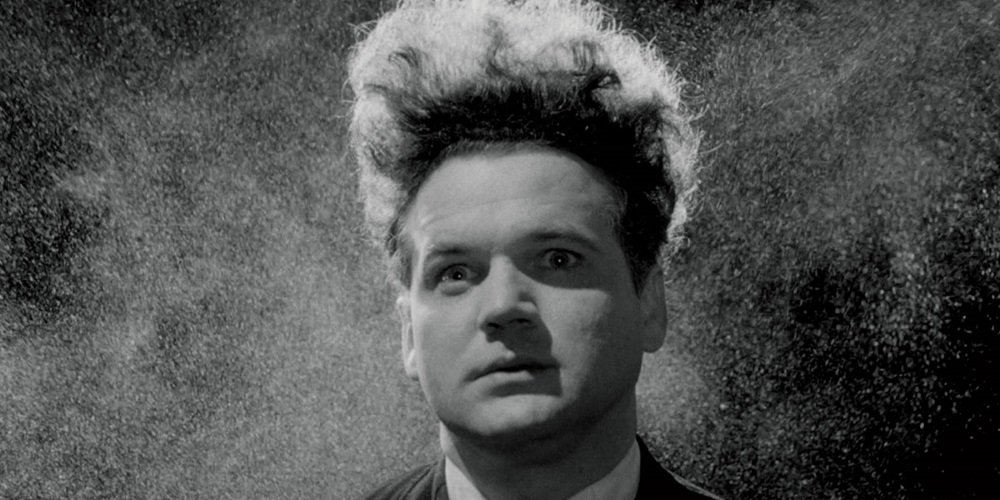 “In heaven, everything is fine,” but in Eraserhead (1977) nothing is fine. David Lynch’s debut feature is grim, disturbed, mutated, claustrophobic, a world that appears to be unraveling—or, more accurately, decaying—before our eyes.

Jack Nance stars as the doughy, dim factory worker who is suddenly thrust into marriage and parenthood and escapes his grimy, oppressive life by watching the icky mutant cabaret that plays under the radiator of his dingy, windowless room. That’s as clear a description of the plot you’re bound to get. This is an existence where dinner squirms and bleeds as it’s being carved up and where the newborn baby of a dumbstruck couple looks like the premature offspring of livestock raised on a nuclear test site (“They’re still not sure it is a baby,” corrects the mother) that mewls and cries until it drives the maternal impulses right out of its horrified mother.

This black and white plunge into what could be an industrial age throwback in a grimy future of social collapse isn’t steampunk. It’s steam-angst, a film born of the subconscious and best absorbed in the dark and hush of night. This is a sensory experience that is not of this world, with a soundtrack that insidiously drills the drone of churning machines, venting steam, and buzzing electrical current into our skulls. This truly is a dream thrown upon the screen.

Lynch spent five years, from inception to completion, making Eraserhead with a loyal cast and crew that, at times, lived with Lynch on the very set of the film. Did the film haunt their dreams, or did their dreams haunt the film? There was nothing like it when it emerged in 1977 and it became the quintessential midnight movie experience for decades. Seen today, it is pure, primordial Lynch, and you can see its echo in the mood and atmosphere of The Elephant Man (1980), an otherwise narrative drama punctuated with reveries of the inexplicable; the logic-defying journeys of Lost Highway and Mullholland Drive; and in Twin Peaks, where the Man From Another Place of Agent Cooper’s dream palace takes up residence in the curtained stage of the Lady in the Radiator, now carpeted like the entry of Henry’s apartment building.

This is Lynch’s original nightmare world, a place in between, of industrial slums and alienated folk assaulted by a symphony of grinding noise that gets under your skin.

Lynch supervised and signed off on 4K digital transfer from the original negative. Criterion Channel also presents a video introduction by Lucky Yates plus supplements from the Criterion disc release, including archival interviews with David Lynch, Jack Nance, Frederick Elmes, and others.

and other services. Availability may vary by service. Details on the supplements below the trailer.
Eraserhead [DVD]

Always the maverick, Lynch personally supervised the remastering of his earliest films on DVD and released them on his own private label, so no surprise that he was intimately involved preparing the film for its Blu-ray debut on Criterion. Lynch supervised and signed off on the 4K digital transfer from the original negative and it looks beautiful. As does the film. Lynch creates beauty out of what others would find ugly and this master preserves the quality of film grain and sculpted light of Frederick Elmes’ cinematography. The stereo soundtrack was created by Lynch and sound editor Alan Splet in 1994 and it is as evocative as the imagery. The film is immersive and short of a theatrical screening of a new 35mm print, this is as rich a presentation as you will likely ever find.

It also feature 2K restorations of six Lynch shorts, all previously released by Lynch on DVD, with brief video introductions to each by the director: Six Men Getting Sick (1966), an animated (and self-explanatory) art-installation; The Alphabet (1968), a strange mix of live action and animation; the weird fairy tale The Grandmother (1970), The Amputee, Version 1 (1974) and The Amputee, Version 2 (1974), both starring future log lady Catherine Coulson, and Premonitions Following an Evil Deed (1996), his deliriously weird and unsettling 52-second piece shot on the 19th century Lumiere camera for the anthology film Lumiere and Company. And his 2001 documentary “Eraserhead Stories,” created for the DVD debut of the film on his own label, is centered around Lynch discussing the making of the film. For most directors this wouldn’t be anything special but Lynch had quite conspicuously made himself absent from the supplements of all previous studio-produced DVDs of his work. This was the first time he recorded an interview specifically for the home video release of one of his films. It apparently was painless enough, for it wasn’t his last.

Criterion shot video new interviews with Catherine Coulson (who was Lynch’s assistant on the film), actors Charlotte Stewart and Judith Anna Roberts, and cinematographer Frederick Elmes for this edition and gathers archival interviews going back to 1979, with Lynch and Elmes speaking to a production class at UCLA. There’s a clip of Lynch and actor Jack Nance from the French TV program Cinema de notre temps recorded in 1988, an excerpt from the 1998 documentary Pretty as a Picture: The Art of David Lynch featuring Lynch, with actors Nance and Stewart and assistant Coulson revisiting one of the shooting locations, and two trailers. The accompanying booklet features an excerpt from Chris Rodley’s interview book “Lynch on Lynch” focused on the making of the film.

Also note that Lynch has provided no chapter stops. He doesn’t like them and Criterion has honored his preference.