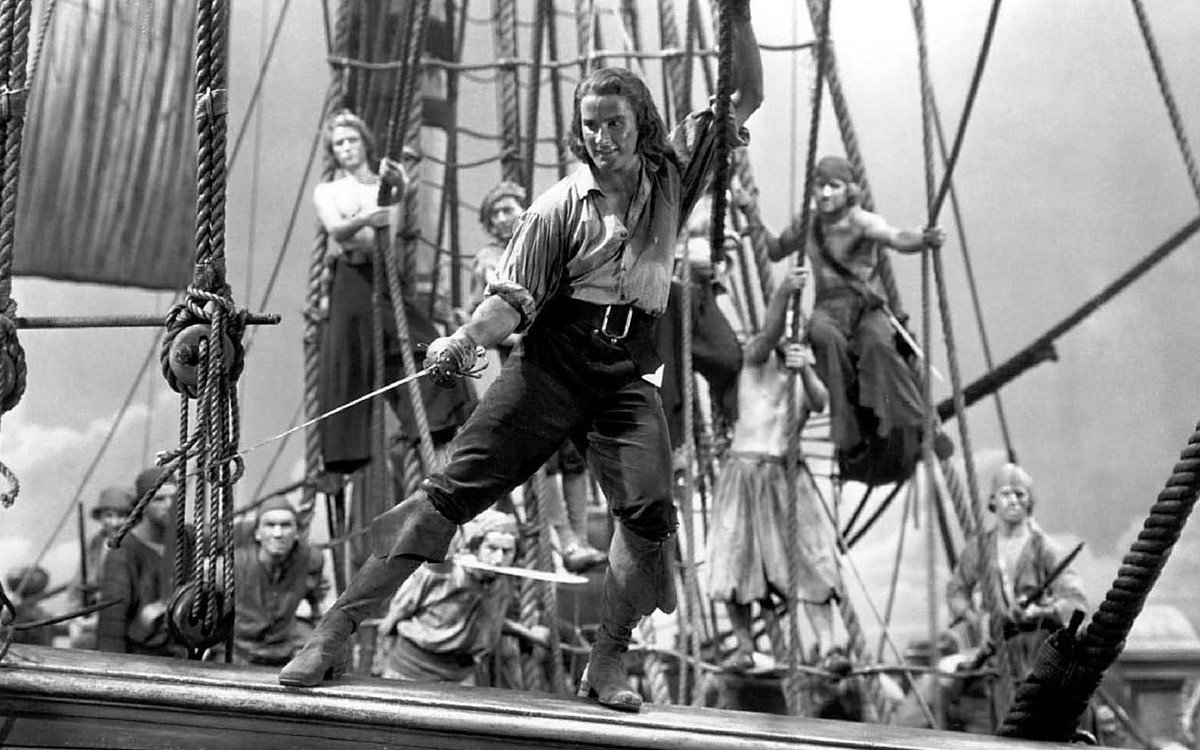 Errol Flynn was Warner Bros. contract player, barely a supporting actor on the Hollywood scene, when he shot to stardom in the starring role of Captain Blood (1935), Warner Bros.’ lavish adaptation of Rafael Sabatini’s novel.

His bravado and charisma brings to life the rousing tale Peter Blood, a courageous British doctor who, unjustly sold into slavery on a Jamaican plantation, escapes from bondage with his fellow prisoners and becomes the gentleman rogue pirate of Caribbean. The romance comes courtesy of the radiant Olivia de Havilland, the aristocratic beauty who is both infuriated and enchanted by the stubborn Dr. Blood, and the villainy from Lionel Atwill as the brutal slave-owner with a love of the lash and a cocky Basil Rathbone as the reigning pirate king.

The swashbuckler had been around before Flynn picked a cutlass, but the Tasmanian-born bit player reinvigorated the genre with his mix of dashing good looks, haughty insolence, and alluring confidence. Director Michael Curtiz builds from one set piece to another with high style and spirited flair, building to a nimble beach-side sword fight with pirate nemesis Rathbone and climaxing with a grand sea battle that belies the film’s modest budget. Erich Wolfgang Korngold’s dynamic score was his first original film composition.

It was nominated for five Academy Awards, including best picture and best director for Curtiz, his first of five nominations.

Leaves HBO Max at the end of October. Add to My List

The Errol Flynn Signature Collection, Vol. 1 (Captain Blood / The Private Lives of Elizabeth and Essex / The Sea Hawk / They Died with Their Boots On / Dodge City / The Adventures of Errol Flynn) [DVD]

The Warner Bros. DVD includes the original featurette Captain Blood: A Swashbuckler Is Born, a simple but informative 22-minute overview of the production featuring a solid collection of film historians along with the only surviving veteran of the production: Ms. Olivia de Havilland herself. Also features the audio-only Lux Radio Theater production from February 22, 1937 starring Flynn & de Havilland, and “Warner Night at the Movies 1935,” a program hosted by Leonard Maltin with the musical short Johnny Green and His Orchestra, the comedy short All-American Drawback, the cartoon Billboard Frolics, a newsreel, and a 1935 trailer gallery.