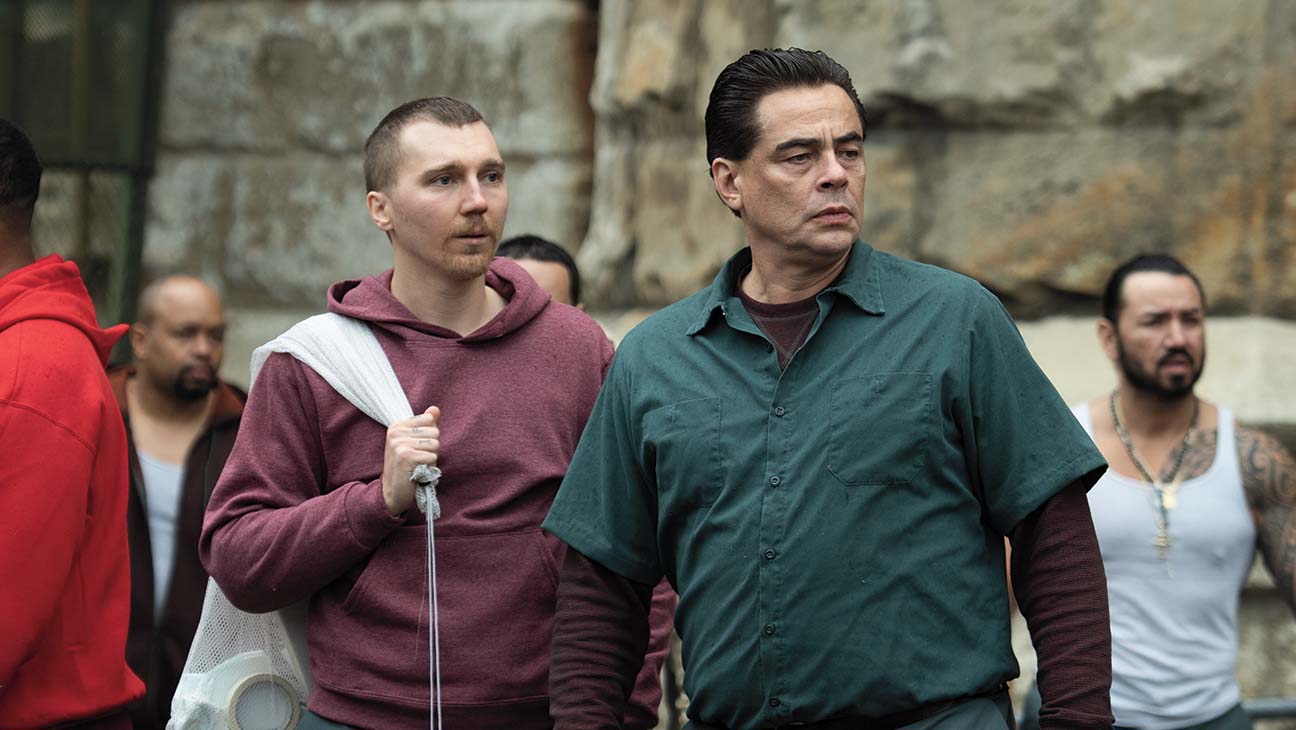 In 2015 Richard Matt and David Sweat, two inmates at Clinton Correctional Facility in upstate New York, escaped with the help of Joyce “Tilly” Mitchell, who ran the sewing shop and engaged in sexual affairs with both men. The eight-hour limited series Escape at Dannemora (2018), originally produced for Showtime, dramatizes the true story.

Benicio Del Toro plays Matt, who is serving a life sentence for murder and essentially runs the underground prison economy with the help of a guard (David Morse) who smuggles in contraband. Paul Dano is Sweat, a younger man desperate to get transferred to a warmer prison. The most nuanced performance, however, comes from Patricia Arquette as Tilly Mitchell, whose fantasies of escape from a dull marriage are ably manipulated with Matt.

With Matt’s prison connections and psychological savvy and Sweat’s smarts, they team up to tunnel through the prison’s unmonitored basement,

The series, created and written by Brett Johnson and Michael Tolkin and directed by Ben Stiller, best known for his work in comedy, takes its time to explore both the physical efforts of the six-month process (Sweat’s contribution) and the complex relationship between the two inmates and Tilly. It becomes more psychological drama than escape thriller and the story drags out in the middle episodes, but the excellent performances sustain the series until the energy picks up with the escape in the fifth episode (which begins with a bravura long take following Sweat as he races through the entire escape route in a dry run).

Extended flashbacks of the sixth installment provide the backstory of the three players and remind us of the violent crimes that landed the two men in prison and the final double-length episode wraps the story with the failed flight through the snowy wilderness as the Inspector General (Bonnie Hunt) puts the prison itself under scrutiny. Throughout the series, Stiller’s direction brings out the complexity of the characters and their relationships within a prison culture that constantly looks the other way.

It was nominated for 12 Emmy Awards, including Outstanding Limited Series and nominations for director Ben Stiller, actors Patricia Arquette, Benicio Del Toro, and Paul Dano, and the screenwriters, and Arquette won a Golden Globe and Screen Actors Guild Awards for her performance.

, iTunes, GooglePlay, Fandango, Vudu and/or other services. Availability may vary by service.
Escape at Dannemora [DVD]

Seven episodes on three discs on DVD, with commentary on each episode and two featurettes.