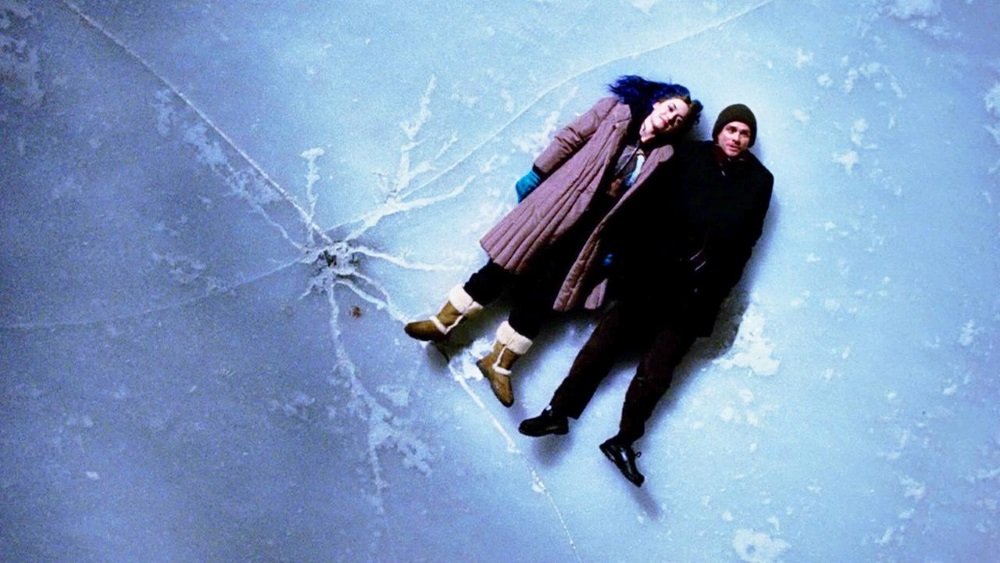 Charlie Kaufman, the screenwriter of Being John Malkovich and Adaptation, offers his most poignant and touching work in Eternal Sunshine of the Spotless Mind (2004).

You wouldn’t even know it was his work from the opening of the film, an awkwardly sweet romantic flirtation between shy sad sack Joel (Jim Carrey in his least mannered and most unselfconscious performance to date) and Clementine (Kate Winslet), an impulsive, emotionally restless girl in blue hair and a carnival-colored wardrobe. Only later do Kaufman’s trademark weirdnesses and mind-games begin: after a bad break-up, Clem has the entire affair wiped from her memory by Lacuna Inc., and Joel follows suit.

Kaufman’s script (from a story he co-wrote with director Michel Gondry) is full of conflict, frustration, and failing, strained relationships—between Joel, Clem, and the entire crew of Lacuna—but once the cleansing process begins, Joel’s subconscious fights to hold on those memories. He dashes through his mindscape in a cerebral game of hide-and-seek, like a doomed target relentlessly chased by a video game player. The wacky sight gags and psycho-drama slapstick is tinged with melancholy and regret as Joel realizes that his experiences, good and bad, are what make him who he is, and he feels a little of himself die as his life with Clem slips away.

Gondry connects with this sad lot on a profound level, mining regret in their quick fix solutions to life’s little tragedies, but he also finds hope in the human spirit, and the realization that the joys in taking a chance on love outweigh the emptiness of heart armored against hurt. Tom Wilkinson co-stars as the professorial head of Lacuna, Kirsten Dunst his adoring assistant, and Mark Ruffalo and Elijah Wood the goofball technicians on the search-and-destroy mission through Joel’s memories.

It won an Academy Award for Charlie Kaufman’s brilliant screenplay and Kate Winslet earned an Oscar nomination for her performance.

and other services. Availability may vary by service.
Eternal Sunshine of the Spotless Mind [DVD]

The Blu-ray and DVD editions feature commentary by director Michel Gondry and screenwriter Charlie Kaufman, deleted scenes, the documentary featurette “A Look Inside Eternal Sunshine of the Spotless Mind,” the interview featurette “A Conversation with Jim Carrey and Michel Gondry” (where they compare and discuss their favorite scenes), a commercial for Lacuna, Inc., and a music video.