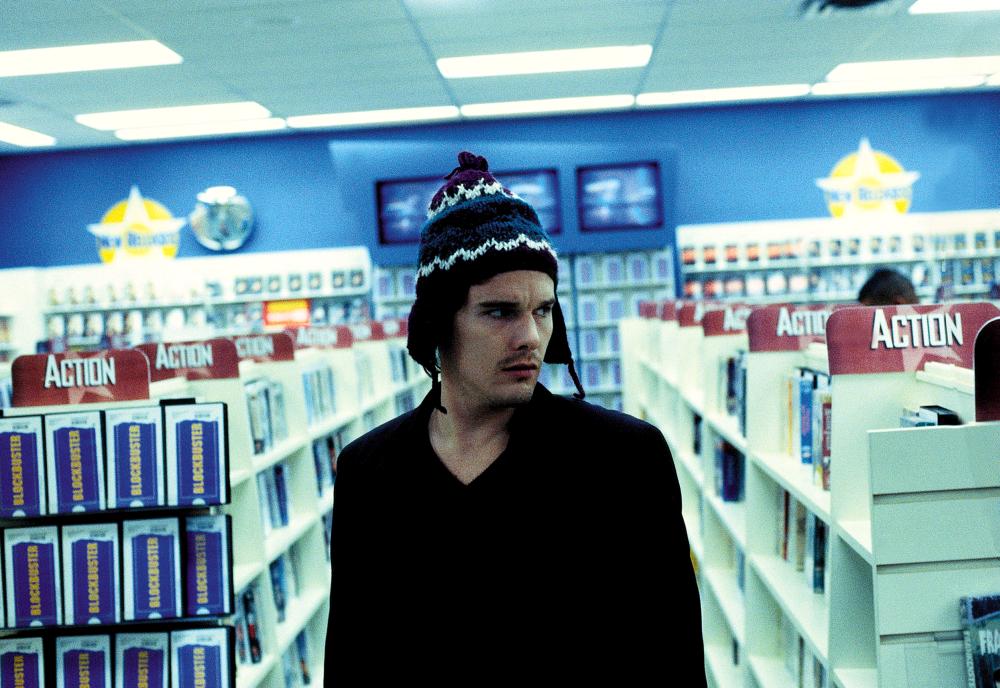 This is not your father’s Hamlet (2000). This melancholy Dane is son of the deceased Chairman of Denmark Corporation. His castle is a sleek but alienating New York high rise dotted with omnipresent surveillance cameras, his kingdom city streets lined with paparazzi and tabloid reporters.

Ethan Hawke is the youngest actor to tackle the role of Hamlet on film but the youth makes sense, since he’s a student returned home from college, and it’s refreshing to see a Hamlet who really acts like a grieving, messed up young adult tortured by indecision and insecurity. In this version, he’s a film student home for his father’s funeral and he’s emotionally blindsided by his mother’s sudden remarriage. His uncle/stepfather Claudius (a smooth, smarmy Kyle Maclachlan) is a manipulative corporate pirate and his mother Gertrude (Diane Venora) is too distracted to hear Hamlet’s anger and confusion. They are a warped mirror of the family of loyal Polonius (a fussy but tenderly sincere Bill Murray in a lovely performance) and his warm, concerned relationship with his children Laertes (Liev Schreiber) and Ophelia (Julia Styles). Sam Shepard is the ghost of the king who starts Hamlet on his odyssey.

Director Michael Almereyda preserves the language (admittedly pared and pruned) in a modern setting and makes some startlingly effective dramatic choices. Hamlet hides behind an ever present video camera, shielding his bottled up grief while watching the drama of his family play out from a distance. “To be or not to be” is contemplated in the aisles of a Blockbuster and the suicidal musings of other monologues appear in direct address to his camera, a diary-like confession that carries all the more power for its intimacy and isolation. Ophelia’s tortured demise has never been more poignant and Gertrud’s climactic death is transformed into a piercing maternal sacrifice.

The cold blue and gray palette at times sucks the energy from the film along with the color—even at under two hours it sometimes slogs along in low gear—but Almereyda refreshes a text that has threatened to become a cultural cliché. Fresh, vibrant and vital, this interpretation reminds us why Shakespeare is timeless. The scenery changes and the setting moves, but his stories and concerns are eternal.

, iTunes, GooglePlay and/or other services. Availability may vary by service.
Hamlet [DVD]