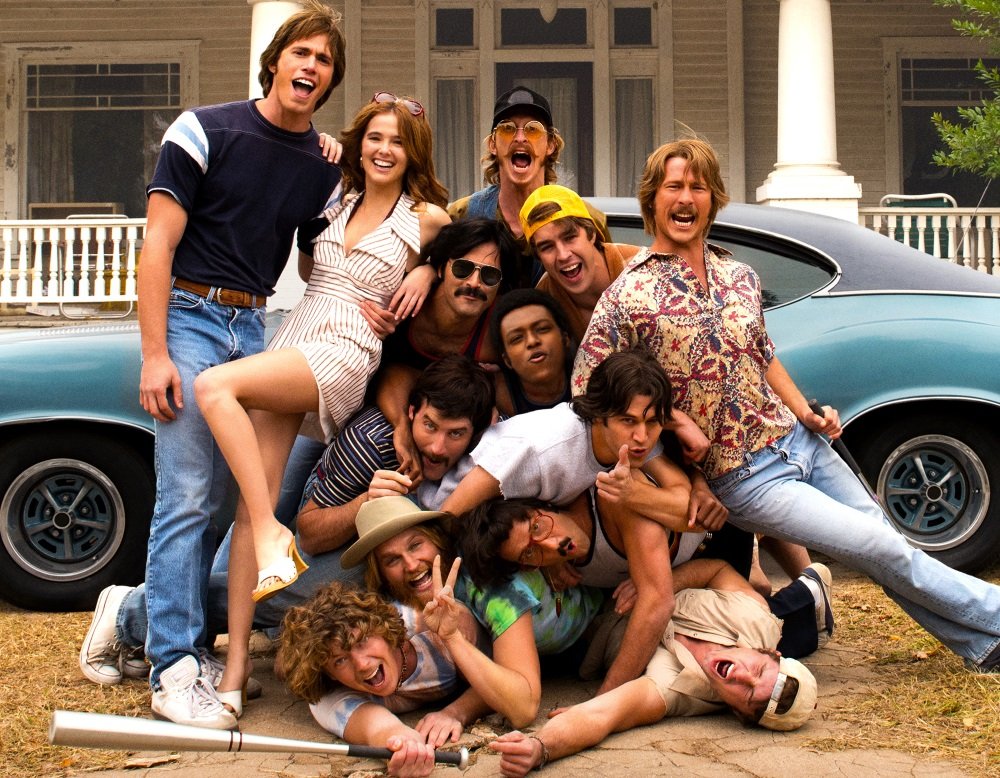 Filmmaker and chronicler of growing up in America Richard Linklater describes Everybody Wants Some!! (2015) as the “spiritual sequel” to Dazed and Confused, his 1993 coming of age (or perhaps more accurately coming of self) classic. Set four years after Dazed and centered on a high school baseball all-star on a sports scholarship arriving on campus for his first year of college, it offers a new slate of characters and experiences embedded in the texture of a small Texas college town in 1980 but otherwise it takes the next step without missing a beat.

Jake (Blake Jenner) is a good-looking, easy-going, all-American Texas kid who lands in off-campus housing exclusive to members of the college’s nationally-ranked baseball team. The film covers the weekend between Jake’s Friday morning arrival and the start of classes on Monday morning, which means plenty of time for parties, club-hopping, and getting high and hanging with his new teammates, some of whom work overtime at establishing their jerk credentials. Thick with the testosterone and egos of competitive athletes tossed together off the field as well as on, it’s a culture shock for Jake, once the top athlete at his school and now the new guy on a team of champions where he has to prove that he belongs in the elite. That Jake rolls with it all is testament to his confidence and his self-awareness. He’s a smart kid who can put sports in perspective. Not everyone there is so self-aware, though many of them are and aren’t shy about sharing their insights. Because what is college life without the young adult philosophizing of the would-be intellectual? It may not always be profound, but it is sincere and I couldn’t help but nod in recognition.

It makes for a pretty male-centric portrait, with only a single female character—Beverly (Zoey Deutch), a theater student—given an opportunity to be more than an object of male interest. (The boys spend every night looking to score and, being the only campus athletes on a winning team, they usually do.) Linklater trades the brilliant intersection of the culturally specific and the generationally universal of Dazed and Confused, which reached across the sexes and the stratified cliques in its portrait of high school life, to dive into the culture of the college athlete, something Linklater knows firsthand.

It’s not a limitation, merely a perspective, and Everybody Wants Some!! is a smart and perceptive look at this world, with such superb era-specific texture (from the music and big American cars to the polyester wardrobes) that you forget it’s all a recreation. Linklater strolls through it all with an easy, laid-back rhythm, taking his time on a conversation here, a competition there, or simply watching the way they strut their way into a club (disco or country bar, they swagger like they class the place up). A few narrative contrivances add a trip to a punk show (where the athletes may not know the music but can dig slamdancing in the mosh pit) and a theater party. And when they finally suit up for a pre-season baseball practice, the chestbeating gives way to focus and athletic competitiveness. They show why they landed with the elite. Along the way, Linklater offers astute observations about college life and young adults exploring their first taste of independence while reminding us that there’s more on their minds than just getting some!!

, iTunes, and other services.
Everybody Wants Some [DVD]

Everybody Wants Some [Blu-ray]

The Blu-ray and DVD includes “Everybody Wants Some!! More Stuff That’s Not in the Movie),” a 25-minutes collection of deleted scenes and outtakes, plus three featurettes and “Skills Videos” which the actors provided as audition footage to show their baseball chops.

Pingback: What to watch: 'Stranger Things' debuts on Netflix plus more on Prime, Hulu, and Netflix - Stream On Demand
Comments are closed.