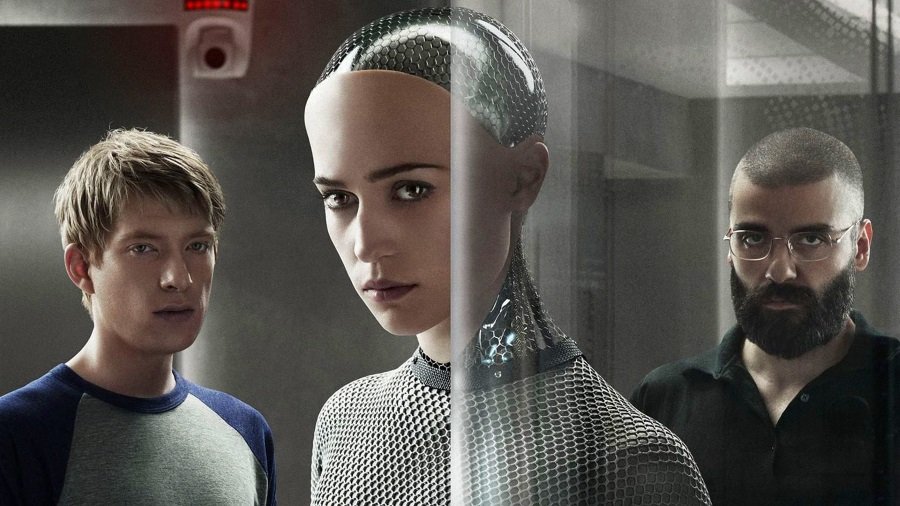 Ex Machina (2014) plays the man-vs.-machine story as a chamber drama.

Domhnall Gleeson is the socially naïve computer programmer Caleb who wins a company contest to spend a weekend in the private retreat of visionary company CEO Nathan (Oscar Isaac), a software genius who can’t wait to show Caleb his new project: a sophisticated artificial intelligence with a feminine appearance (Alicia Vikander).

In fact, Caleb wasn’t some random lottery winner. He was chosen to put the experimental robot, named Ava, through the Turing test: can she pass for human? Apart from the framing sequence, it takes place entirely in the practically antiseptic environs of Nathan’s wilderness retreat, a modern bunker of glass and steel and concrete built into a mountain in the middle of nowhere, and the visual effects are used sparingly but effectively: Vikander’s Ava has the curves of a young woman but is all silicon and plastic and wires under the surface.

Of course, there’s more going on here, as both Nathan and Ava play Caleb for their own ends. Nathan is just as interested in observing how Caleb responds to a humanoid programed with “feminine wiles” while Ava cagily plays upon Caleb’s emotions to escape Nathan’s underground prison. I

t’s written and directed by Alex Garland, who wrote 28 Days Later… and Sunshine, and he makes this a science fiction film of ideas rather than visual spectacle. This smartly-made film is all about the mind-games and shifting dynamics between the characters. And make no mistake: Ava is definitely a character with agency in her own right. She knows what she wants and it motivates her every action.

The atmosphere can get a little thin and the film is pretty much all talk, a series of conversations and interrogations that become verbal chess games, but it’s smart talk backed by terrific performances and it builds to a satisfying climax.

It won an Academy Award for its visual effects and earned awards from numerous critics groups across the country.

Rated R for nudity, language, and scenes of violence.