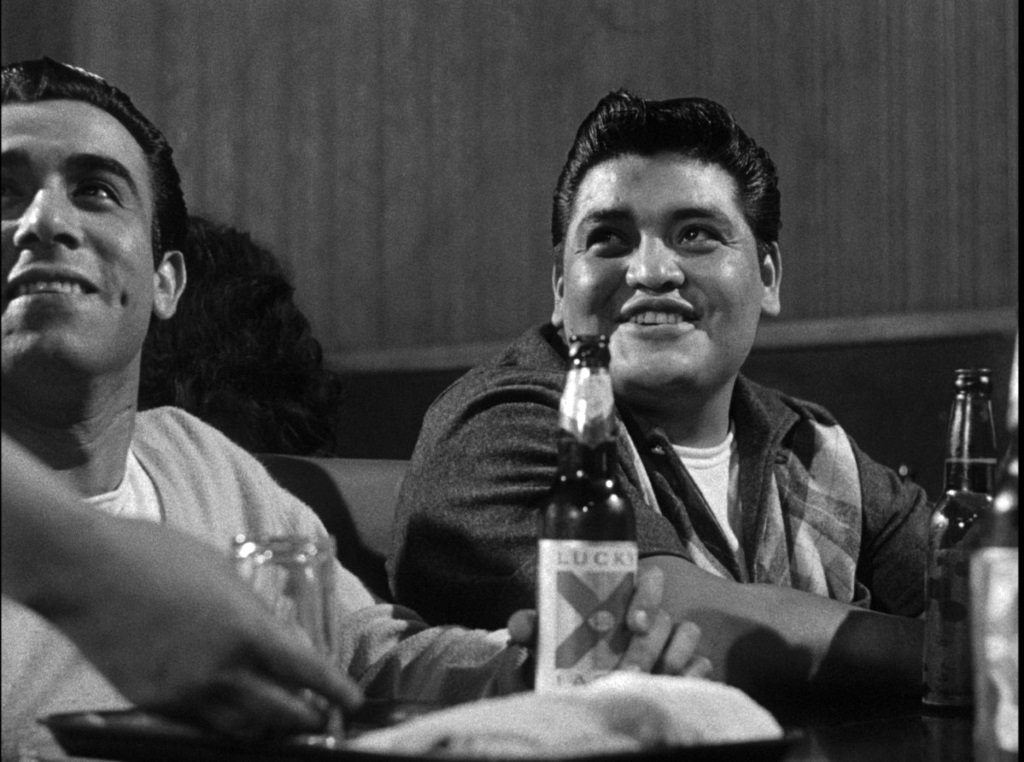 The Exiles (1961), Kent Mackenzie’s independently produced drama, chronicles the lives of urban American Indians (all of them non-actors drawing from their own lives) in the Bunker Hill area of Los Angeles over one long, alcohol-lubricated night.

Homer dropped out of school, left the reservation, joined the Navy, and now drinks his nights away with his buddies, in the bars while they are open and on the streets and in the parks when they close. Mary, his wife, is pregnant with their child and insists that she’s happy but her tone and expression belie her words as she watches Homer gets swept up once again in a night of aimless drinking. Tommy insists that he’s just embracing life as he hits up friends for the next drink and charms the women he meets in his barhopping wanderings.

There’s no uplifting message here and the internal monologues that accompany their wanderings speak of desires and anxieties and disappointments that appear doomed to repeat themselves. But there is also something singular and specific about these people and the culture they have created within the city: Mackenzie’s portrait may be fiction but this world is very real.

The Exiles comes from a time when independent cinema was the realm of mavericks and dreamers working in the margins, rather than studio subsidiaries and major actors looking for a challenge. It’s a film made on the streets, where they are (as the title suggests) exiles in the urban world. Mackenzie developed the story and wrote the dialogue with his cast and they communicate an honesty and pain and devastating disconnection from their culture even while putting on a happy-go-lucky face.

Add to My List on Criterion Channel or watch free on Kanopy, which is available through most public and college library systems.

Also on DVD and on SVOD through Amazon Video, iTunes, GooglePlay and other services. Availability may vary by service.
The Exiles [DVD]

The two-disc DVD features commentary by and an interview with Sherman Alexie moderated by me (Sean Axmaker), four additional short films by Mackenzie, clips from Thom Andersen’s documentary Los Angeles Plays Itself (which brought new attention to the forgotten film), documentary shorts about the Bunker Hill neighborhood, and a radio interview with Alexie and Charles Burnett.