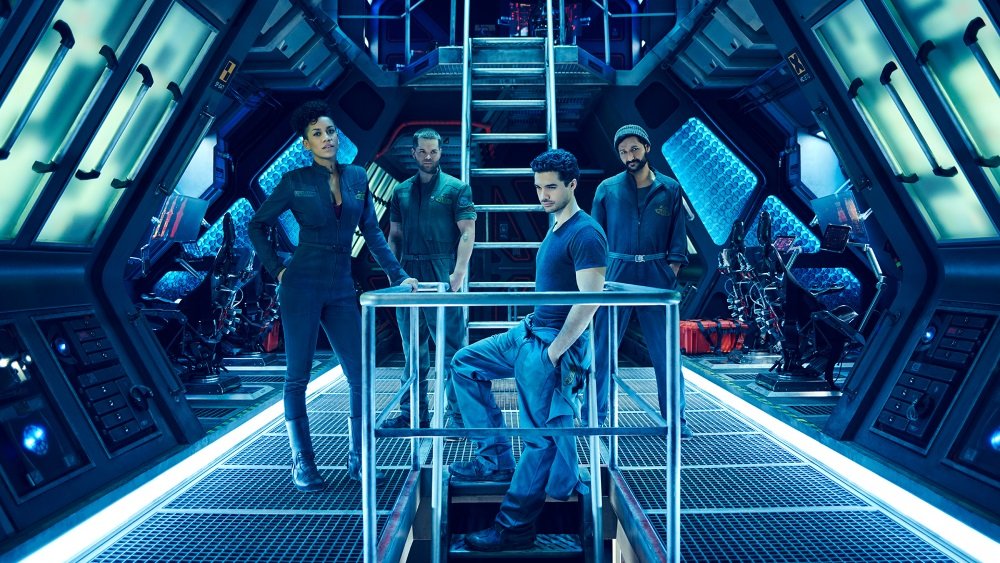 The Expanse is the most ambitious original science fiction series created by the SyFy network since their award-winning Battlestar Galactica reboot. Based on the best-selling novels by James S. A. Corey (the pen name of authors Daniel Abraham and Ty Franck) and developed in collaboration with the authors, The Expanse: Season One is a dense mix of space opera, political conspiracy, and galactic mystery. The first season, which essentially covers the events of “Leviathan Wakes” (the first novel in the series), reaches from Earth to Mars to the asteroid belt, a frontier society of space stations and ships and independent-minded space settlers (known as Belters) under the jurisdiction of the Earth government.

In the opening episode, an ice mining ship survives an attack by what they believe to be a Mars military ship with a weapon more powerful than anything seen before and the crew goes into hiding as they become a target. It’s not just a ship on the run, however. The survivors are stuck in deep space in what is essentially a short range craft, a working ship that hasn’t the fuel or the range to get to a colony and can’t trust any ship they may find in the traditional shipping lanes. Any alliance they make is fraught with suspicion, and they are fair game to the scavengers on the fringes of the deep-space mining industry. Even among the members of the crew, trust is in short supply.

Other stories follows a Belter cop (Thomas Jane in a not-entirely-convincing futuristic haircut) who goes rogue to find a runaway girl who has joined the resistance and a UN diplomat (Shohreh Aghdashloo) who suspects a Mars conspiracy and discovers a more insidious plot. It’s a complicated story in the Game of Thrones vein, more like a serialized novel than a traditional episodic series, and the scope of the story expands until the separate strands converge in the climactic episodes.

The special effects are quite good—SyFy has clearly gone all in for this show—and the creation of the Belter world of cramped space stations and mining ships is appropriately scruffy and lived in. But what makes the show work is the rich social and political culture of the universe, with the frontier society of the Belters not unlike the original American colonies, a hard place where independents and individualists foment revolution against long distance rule by a rich mother country that treats them as second class citizens. And about halfway through the season, the series begins to expand its story far beyond the parameters suggested in the first episodes. By the end of the season, you realize this is not the same show you thought you were getting into. It’s much more interesting and expansive. There is a genuine epic in the making here. A second season is set for 2017 on SyFy.

and other services. Availability may vary by service.
The Expanse: Season 1 [DVD]