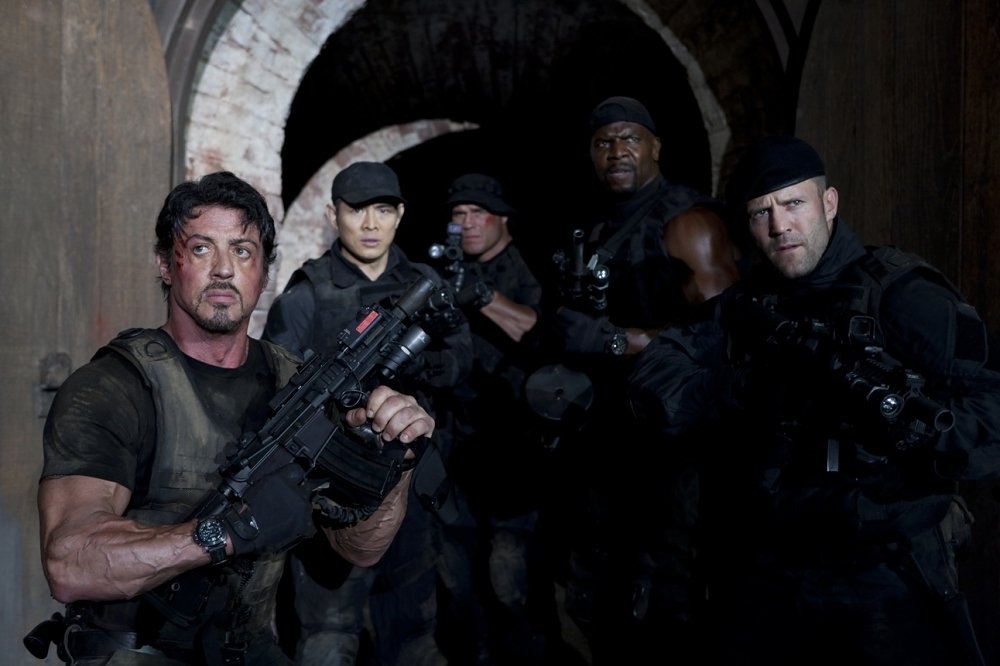 Sylvester Stallone has a spotty track record as a writer/director: passably effective at best, painfully misguided and lost in blind alleys of melodramatic kitsch as worst (Driven). He’s best at serving his own screen image, especially if already established by a previous filmmaker (as in the Rocky and Rambo sequels).

With The Expendables (2010), he manages to fashion an original picture (if you can describe this update of The Seven Samurai and The Dirty Dozen as original) around not simply his image but those of Jason Statham, Jet Li and a few veterans who never made more than a dent in the B-movie action culture (Dolph Lundgren, Randy Couture, Steve Austin) plus one action star ringer (the always entertaining Terry Crews, better known for comedy than action chops). He comes up with a perfectly enjoyable mercenaries-on-a-mission-of-redemption adventure with a mix of testosterone-fueled camaraderie and this-time-it’s-personal seriousness.

Yes, it does feel like a party thrown by Stallone for his friends and fellow action heroes aging out of mainstream leads, but compared to the ADD direction and CGI effects of modern films (and yes, there is plenty of digital blood and fire thrown around the frame), the old school action direction is more satisfying than it ought to be.

And it doesn’t hurt to have Eric Roberts as a bad guy who has the stones to pull off such smarmy arrogance, Mickey Rourke as a greasy but genuine compatriot to the mercenary bunch, and cameos by Bruce Willis and Arnold Schwarzenegger, both tossing off quips like the old days.

It was succcessful enough to get a couple of sequels.

, iTunes, GooglePlay, Fandango, Vudu and/or other services. Availability may vary by service.
The Expendables [Blu-ray+DVD]

The DVD features an easy-going commentary track by director/co-writer/star Stallone, a deleted scene and the featurette “From the Ashes: Post Production” among the supplements. The three-disc Blu-ray Combo features the “Ultimate Recon Mode,” a picture-in-picture track that combines pieces of Stallone’s audio commentary with new video commentary of Stallone and others (including co-stars Dolph Lundgren and Randy Couture and the film’s producers) stepping in on select scenes, pausing and rewinding for effect, while production footage, interview clips and other footage runs through the rest of the presentation. It won’t mean much if you don’t like the film, but it’s well produced and an inventive extension of the commentary format. And it’s pretty entertaining in its own right. Also exclusive to the Blu-ray is the detailed 90-minute “Inferno: The Making of The Expendables” and a 45-minute panel discussion with Stallone and select stars from ComiCon 2010 (including a surprise Bruce Willis visit), plus a bonus DVD and digital copy.