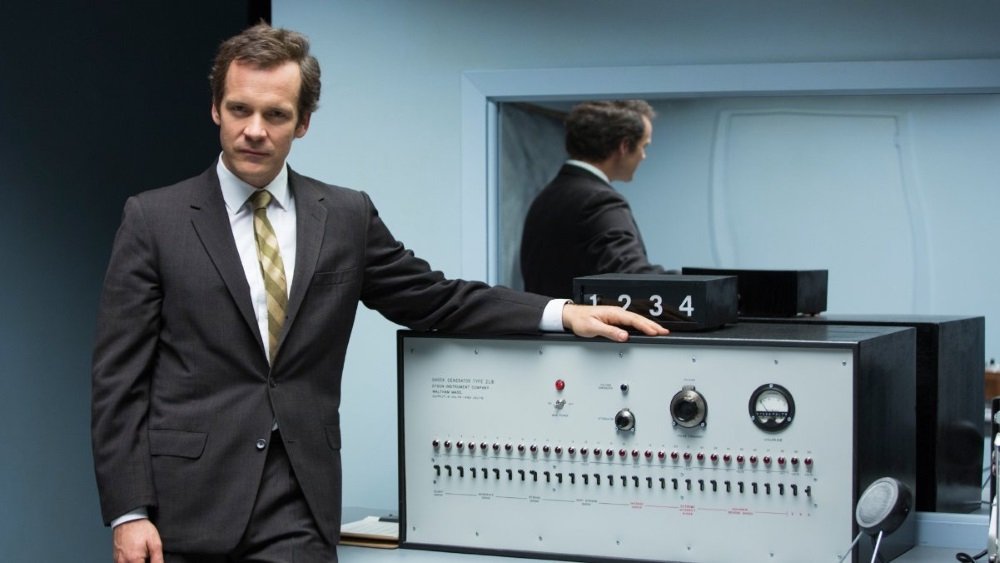 Experimenter (2015) opens with the infamous experiment that made Yale psychology professor Stanley Milgram’s reputation. Subjects are told to ask questions of a person in a booth (heard but unseen) and give them increasingly bigger electrical shocks every time they answer incorrectly. It’s an experiment in teaching methods, they are told, but in fact they are the ones being measured as they continue administering what they believe are life-threatening electrical jolts to strangers on nothing more than the command of a scientist. They are, in essence, simply following orders.

This is all dispassionately explained by Milgram, played here by Peter Sarsgaard, as he sits behind a one-way mirror to observe his subjects (played by John Leguizamo, Anthony Edwards, Anton Yelchin, Taryn Manning, and others) and addresses the camera directly. A son of German Jewish immigrants who came to America as the Nazis were rising to power, Milgram wondered how an entire nation could have capitulated to such inhuman commands. He found out. Two thirds of the subjects comply, a finding that shocked the country, made Milgram’s reputation, and dogged him for his entire career. The anger over the experiments are ostensibly over the potential emotional damage suffered by the subjects but the debate keeps turning back to discomfort in what the actual results say about us as a species.

Michael Almereyda writes and directs in a way that acknowledges itself, a commentary of sorts on the mechanics of cinema and storytelling. Almereyda wants us to be aware that this is a fiction even as he explores the ideas with great intelligence and the life of Milgram with curiosity.

Sarsgaard’s Milgram is not a particularly warm, people person, but neither is he cold or arrogant. He’s genuinely curious and that curiosity drives him to more experiments in social psychology; did you know that the idea of “six degrees of separation” is from another of Milgram’s studies? You may not know Milgram’s name (I didn’t before seeing the movie) but his observations have become a part of our social culture.

It’s probably the most intellectually engaged and engaging film of 2015, for both its subject matter and its presentation, and features the most overlooked ensemble of the year. It’s simply fascinating.

Add to My List on MUBI or stream free on Kanopy, which is available through most public and college library systems