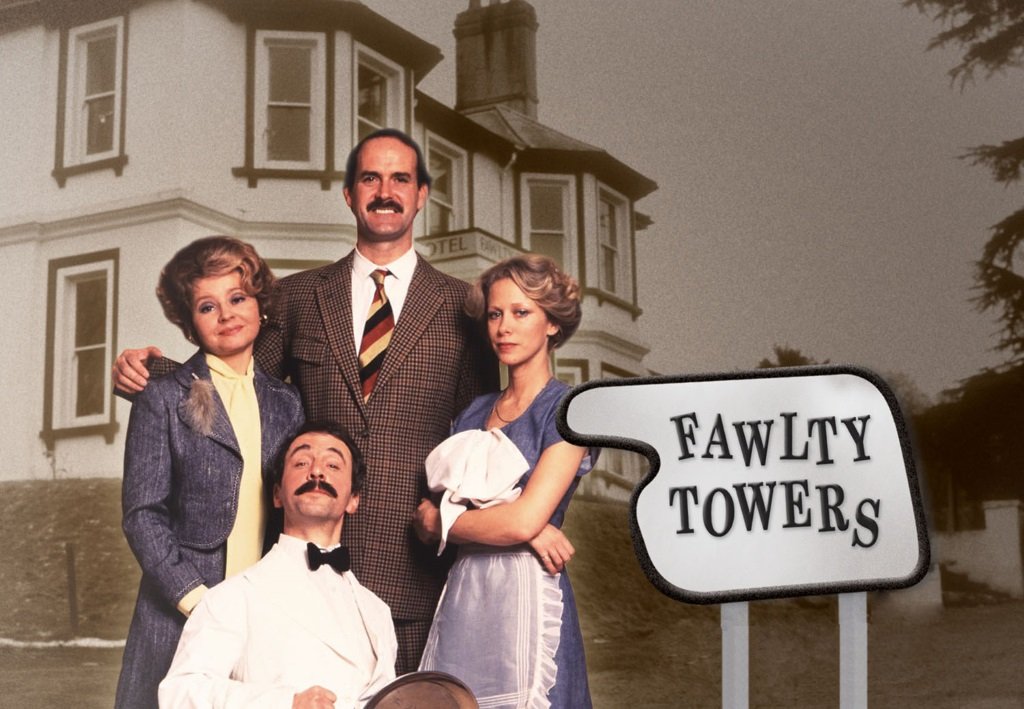 Fawlty Towers: Complete Series (1975-1979) – Basil Fawlty, the brazenly rude hotel proprietor created and incarnated by John Cleese in his brilliant British sitcom, is the most insolent, boorish, hilariously obnoxious character in the face of customer disservice. He’s a man who treats his guests as an inconvenience to running his business, with the exception of rare visits from the aristocracy and other members of the upper-class, who bring out the insufferable toady in him. His screen wife Sybil (Prunella Scales) put it best: “You’re either crawling all over them, licking their boots, or spitting poison at them like some Benzedrine puff adder.” “Just trying to enjoy myself, dear,” he retorts with a tossed-off nonchalance.

Cleese puts his contortionist comic ability to fine use, punctuating Basil’s outrageous faux pas with absurd gymnastics and slapstick ballets, while co-writer/co-star Connie Booth becomes his reluctant partner-in-crime as Polly, the maid forever enlisted to help Basil cover-up the disasters created by his penny-pinching shortcuts and ill-advised brainstorms. Scales’ Sybil is the obliviously chatty voice of reason whose disapproval terrifies Basil and Andrew Sachs mangles the English language as the Spanish bellhop Manuel, whose struggles with simple directions results in comic lunacy reminiscent of Robert Benigni.

The ensemble is brilliant but it’s Cleese who makes every episode soar to dizzying heights of comic genius, punctuating Basil’s disastrous schemes with absurd gymnastics and transforming Three Stooges-style pokes and kicks into a slapstick ballet, whether he’s berating an uncomprehending Manuel, flogging a temperamental car with feverish fury, or launching into a stork-like goose-step in an impromptu (and outrageously inappropriate) impersonation of Adolf Hitler. The show ran for a mere six episodes in 1975, and then Cleese and co-creator Booth reunited the cast in four years later with a further six episodes without missing a punchline.

The series was remastered for the 2009 three-disc DVD set. John Cleese records new commentary for every episode, looking back with perceptive observations after more than 30 years, appreciative of what worked (especially of those contributions by his co-stars and collaborators) and frankly critical of every perceived slip and weakness of the script and his own performance. This is a master class in television comedy, from writing and directing to performance and execution. Also features newly recorded interviews with all members of the cast (including Connie Booth) in addition to the interviews with Cleese and co-stars Prunella Scales and Andrew Sachs from the previous DVD release, previously available commentary on each episode by the directors (John Howard Davies and Bob Spiers, respectively), outtakes and other supplements.