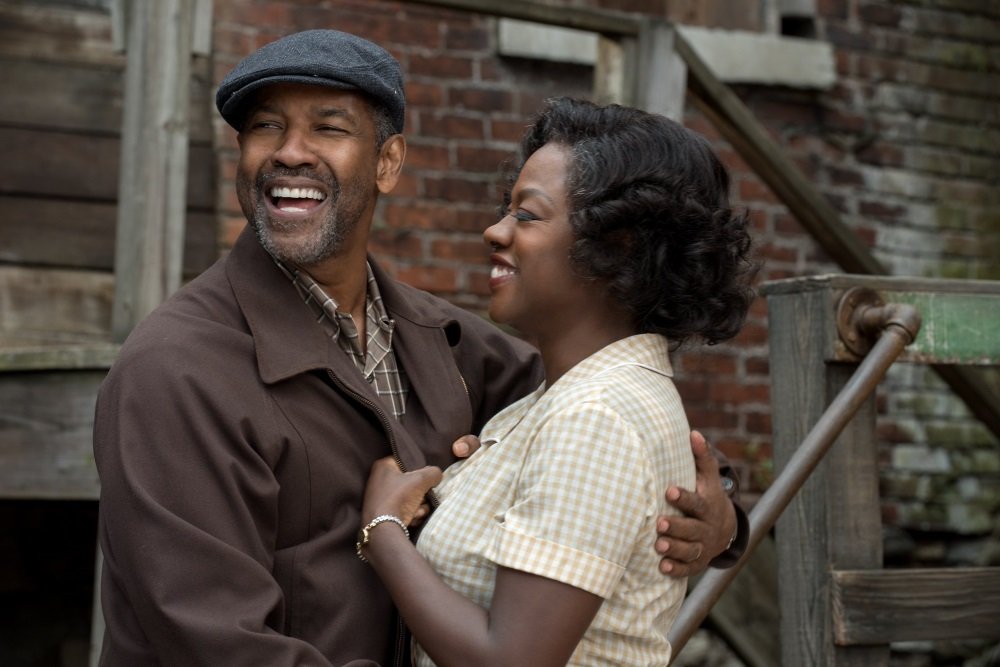 Fences (2016) – Denzel Washington and Viola Davis earned Tony Awards for their performances in the 2010 Broadway revival of August Wilson’s play “Fences,” the story of a working class African-American family in 1950s Pittsburgh. With the blessing of Wilson’s widow (the playwright passed away in 2005), Washington brought the play to the big screen, directing from a script written by Wilson (Washington and Tony Kushner did not take screen credit for their work on Wilson’s draft) and featuring most of the members of the Tony-winning production reprising their roles.

Washington is Troy Maxson, a middle-aged garbage collector and proud home-owner, and Davis his wife Rose. The artwork suggests a heartwarming film full of smiles and embraces and family overcoming hardship and the opening scenes have an easy warmth as Troy celebrates the end of the work week with his coworker and best friend Jim Bono (Stephen McKinley Henderson) in the tiny back patio of their two-story home. But the banter and laughs gives way to tension and judgment and resentment when Troy’s eldest son, jazz musician Lyons (Russell Hornsby), comes around to borrow money and their youngest son Cory (Jovan Adepo) announces he’s cutting back his grocery job for football in hopes of a college scholarship. Troy was a star in the Negro Leagues before Jackie Robinson crossed over and, though he peppers his conversations with baseball metaphors and keeps a makeshift batting cage in his yard, he’s still bitter that he never got his chance. Now he wields his work ethic as a measure of responsibility—he took a blue collar job when sports failed to give him a career—and refuses to believe his sons have any better chance than he did forging a career. It’s only one of the tensions that knots up this family as Troy keeps building fences around himself.

Henderson and Hornsby reprise their roles from the 2010 revival along with Mykelti Williamson, who plays Troy’s brother Gabriel, a war vet with brain damage that has left him a grown child. The government’s settlement check helped buy Troy’s house, which was Gabriel’s home before he rented a room a few blocks away for a sense of independence. It weighs on Troy, a reminder that he didn’t there on his own effort alone, and perhaps a little guilt echoes back around his head, like he’s failed his brother.

Not that any of these characters can be reduced to a few defining traits or motivations. Washington’s Troy is proud and ambitious and judgmental and petty, a man who overcame more than we can appreciate to purchase his little piece of the American Dream and feels justified in his betrayal of the contract he made with Rose, who has endured quite a bit to stay with Troy. Davis won an Oscar for her performance in the Supporting Actress Category but Rose is as central a character as Troy, the generosity that balances the tough love born of Troy’s tough life and the survivor who keeps her disappointments and frustrations locked inside until Troy pushes her endurance too far.

It’s Washington’s third directorial effort and, as in his previous films, the camera serves the actors. He remains true to the play—the drama plays out in the two-story house and the tiny backyard, with a couple of location scenes establishing their urban Pittsburgh neighborhood—and frames the images to showcase the interactions of the cast. As handsome as it is, this is a filmed play—complete with five stars who completed over 100 performances in the Tony Award-winning Broadway production—and the drama comes from the words and the performances, which are as intelligent and emotional and powerful as you would expect.

, iTunes, GooglePlay and other services. Availability may vary by service.
Fences [DVD]

Denzel Washington shot Fences on 35mm film and the Blu-ray preserves the earthy palette of the brick and wood and dirt 1950s setting as well as the warmth that we associate to actual celluloid. Whether it’s a set or a location, it feels lived-in.

The DVD is a bare bones affair but there are five featurettes on the Blu-ray. “Expanding the Audience: From Stage to Screen” features footage from the stage production along with the usual cast and creator interviews and “The Company of Fences” focuses on the cast (both are around 9 minutes). Slightly shorter are “Building Fences: Denzel Washington” (7 mins), “Playing the Part: Rose Maxson” (7 mins), and “August Wilson’s Hill District” (6 mins), which explores the Pittsburg locations where Washington shot the film. Also features the trailer and an Ultraviolet Digital HD copy of the film.