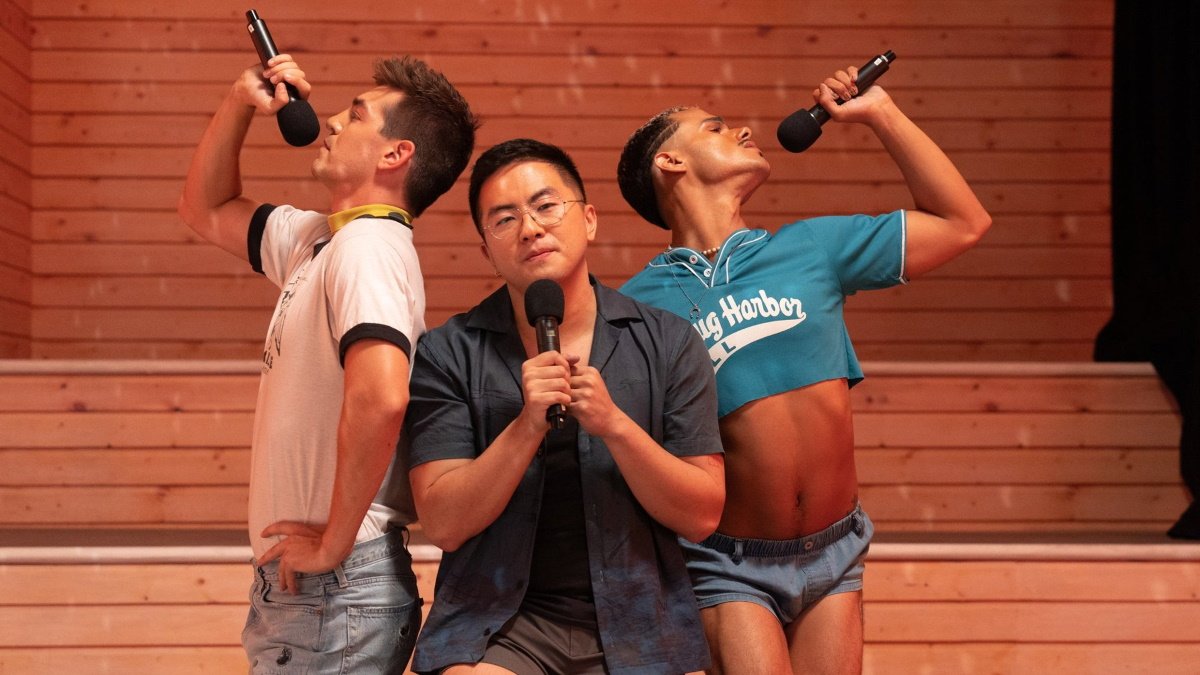 “Fire Island” (2022) puts a queer spin on Jane Austen’s “Pride and Prejudice” with a romantic comedy set in a multicultural community of young gay men over their summer vacation. Joel Kim Booster and Bowen Yang star as best friends facing thirty who vow to make the most of what may be their last annual gathering and end up colliding with a group of wealthy, somewhat arrogant gay men from Manhattan society. Margaret Cho costars. (Hulu)

Two bank robbers (Jake Gyllenhaal and Yahya Abdul-Mateen II) steal an “Ambulance” (2022, R) after a bank heist goes south and they take the paramedic (Eiza González) hostage as they try to escape in a flight across Los Angeles. Michael Bay returns to his roots as a director of high-speed action cinema with this energetic heist-gone-wrong thriller. Garret Dillahunt costars as commander of what appears to be the complete resources of the LAPD in pursuit. (Peacock)

The hyperactive video game mascot is back in “Sonic the Hedgehog 2” (2022, PG) to take on the villainous Dr. Robotnik (Jim Carrey) and his animated sidekick Knuckles (voice of Idris Elba) in a revved-up, globe-hopping chase for an all-powerful emerald. Or something like that. James Marsden and Tike Sumpter costar as Sonic’s adoptive parents. (Paramount+)

Danny Boyle takes on the true story behind punk rock legends the Sex Pistols in “Pistol” (not rated), a six-part limited series that follows the band as impresario Malcolm McLaren (Thomas Brodie-Sangster) recasts them as aggressive rebels led by the sneering Johnny Rotten (Anson Boon) and shamelessly markets them to fame as an anti-establishment phenomenon. Based on the memoir by founding member Steve Jones (played by Toby Wallace) and scripted by Baz Luhrmann collaborator Craig Pearce, it costars Jacob Slater, Talulah Riley, and Maisie Williams. All episodes streaming. (Hulu)

Ben Whishaw stars as a junior doctor navigating the ranks of hospital hierarchy in “This is Going to Hurt: Season 1” (TV-14), a British medical drama that uses both drama and comedy to get at the challenges of working in an understaffed health system. Based on the memoir by Adam Kay. New episodes on Thursdays. (AMC+)

“The Outfit” (2022, R) stars Mark Rylance as a British tailor in 1950s Chicago who has to outwit violent gangsters when they take refuge in his shop during a mob war. Also streaming for Peacock subscribers.

An Israeli filmmaker struggles against censorship while he presents a film in a small village in “Ahed’s Knee” (Israel, 2021, not rated, with subtitles).

“Rise of the Teenage Mutant Ninja Turtles: The Movie“ (2022, TV-Y7) is a feature-length spin-off of the animated action series.

A rebellious New York teen (Sky Katz) gets caught up in the surfer world of Australia in the family drama “Surviving Summer“ (2022, TV-PG).

Foodie TV: “A Nation of Broth: Season 1“ (South Korea, TV-PG, with subtitles) explores the history and evolution of Korean soup.

International TV: the limited-series crime thriller “The Perfect Mother“ (France, TV-MA, with subtitles) follows a devoted mother (Julie Gayet) as she tries to prove her daughter is innocent of murder.

Stand-up: “Norm Macdonald: Nothing Special“ (TV-MA) was filmed a few months before his untimely death.

Andrew Gardfield is “The Amazing Spider-Man“ (2012, PG-13) in the first reboot of the superhero series, a role he reprised in “Spider-Man: No Way Home.”

Ben Kingsley stars in “Intrigo: Death of an Author“ (Germany, 2018, R, with subtitles) the first in a trilogy of thrillers adapted from the novels of Håkan Nesser by filmmaker Daniel Alfredson.

True stories: “Gamestop: Rise of the Players“ (2022, R) looks at how a bunch of amateur day traders beat Wall Street in 2021 and “The Last Tourist“ (2021, not rated) examines how tourism is unintentionally destroying the environments of its destinations.

Streaming TV: the new family-friendly competition series “Dancing With Myself“ (TV-PG) debuts, along with new seasons of “America’s Got Talent,” “Fantasy Island,” and “Lego Masters.” Episodes stream a day after their respective network debuts.

“South Park: The Streaming Wars“ (2022, TV-MA) is the third feature-length spin-off of the animated series.

Rachel Griffiths stars as a homicide detective in the one and only season of the Australian urban crime thriller “Dead Lucky“ (2018, not rated).

Also new for Pride Month is a collection of ten films from the New German Cinema “Directed by Ulrike Ottinger,” including her recent documentary “Paris Calligrammes” (Germany, 2020, not rated, with subtitles);

Jennifer Garner stars as an international spy working for a secret agency that has its own agenda in “Alias: Complete Series“ (2001-2006, TV-14).