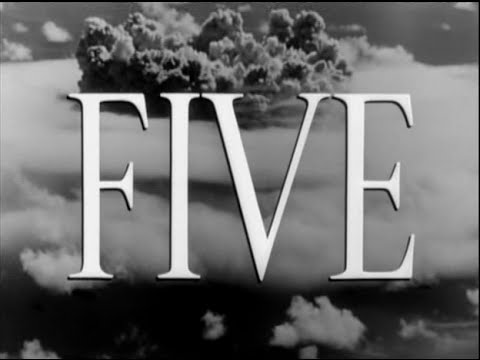 Arch Oboler’s Five (1951) is not the first end-of-the-world film, but it is the first to end it by nuclear holocaust: it opens on the familiar mushroom cloud and Oboler proceeds to scrubs the wonders of the world and the landmarks of civilization free of human habitation with a few simple visual effects and the savage scream of a whipping wind.

The title, as you likely guessed, refers the number of people in the cast, but as the winds die down there is just a single, lone woman dazed and terrified and stumbling through the abandoned relics of human habitation desperate to find another human. When she does, she falls into a state of shock, unable to speak at the sight of a man living in a house upon a hill. The scene calls to mind the opening of George Romero’s Night of the Living Dead fifteen year later; was he inspired by this scene or even the film as a whole? Slowly the five come together: Roseanne (Susan Douglas), a pregnant woman desperate to see if her husband survived; Michael (William Phipps), a working class philosopher ready to build a home far away from the dead cities; Charles (Charles Lampkin), a black ex-G.I. who worked at a bank with the aged Mr. Barnstaple (Earl Lee); and German mountain climber Eric (James Anderson), an arrogant racist with delusions of genetic superiority. For all they (or we) know, they are the only humans left alive in world.

The film is more allegorical than realistic, full of debates on morality and responsibility and offering a contrast between an existence built on cooperation and community versus the singular desires of the individual acting in his own interests. But Oboler, who made his fame in radio, does create an eerie sense isolation. Obolor shot the film at his own ranch, using a guesthouse built by Frank Lloyd Wright set against the magnificent forest. The pristine wilderness looks untouched by man or war, but there are no animals in this Eden, just birds, heard on the soundtrack but never seen.

Michael, who was in the Empire State Building when the end of the world came and made his way across the continent to this house on the California coast, has no interest in entering the cities to scavenge food. He’s eager to return to the earth and farm, with occasional visits to a local country store for canned goods (the sign in the door reads “Back in 5 minutes,” a bit of grim humor in an otherwise humorless film). Eric, however, has no identity outside of civilization and returns to the dead city to play king of the world, but while he ransacks jewels from the city stores, Roseanne gapes as the desolate streets and the skeletons in the cars and on the sidewalks. And while there’s some discussion of radiation poisoning, the telltale sores and boils on the skin speaks volumes.

, iTunes, GooglePlay and/or other services. Availability may vary by service.
Five [DVD]