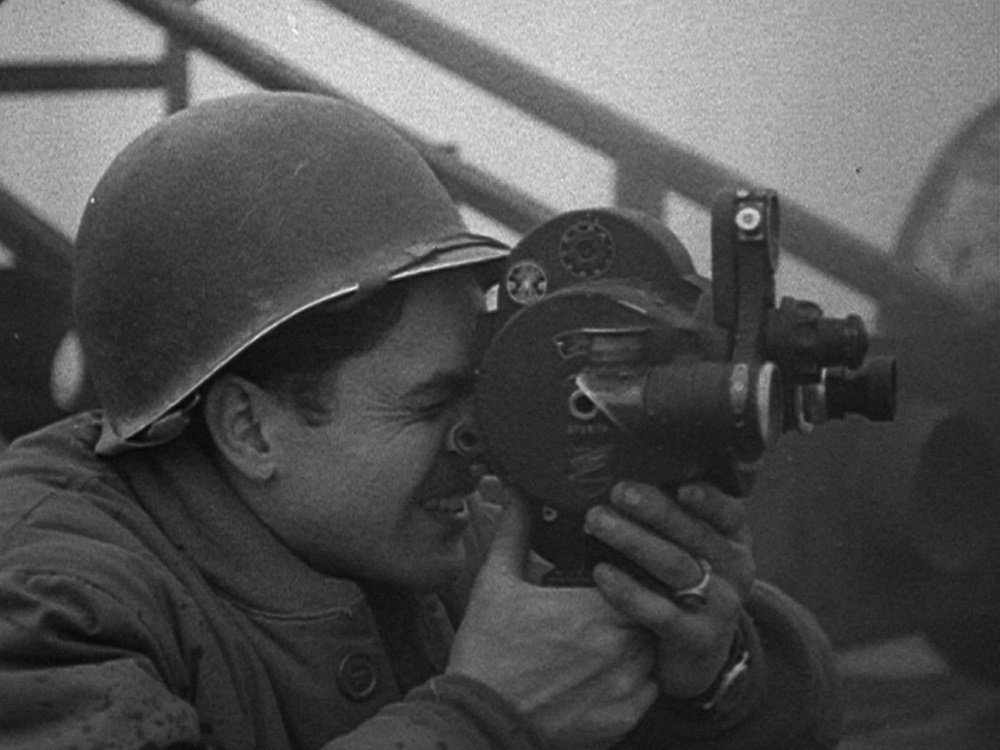 The three-part original documentary Five Came Back, based on the book by Mark Harris, explores how Hollywood filmmakers John Ford, William Wyler, John Huston, Frank Capra, and George Stevens documented World War II and how their experiences informed their lives and their work after the war

“[T]he advantage the documentary has over the book is that it’s able to show off the films themselves, as well as a good deal of related footage that brings the war, and the filmmakers themselves, to life,” writes Todd McCarthy for Hollywood Reporter. “Director Laurent Bouzereau, who is best known for his innumerable “making of” documentaries, most notably those about Steven Spielberg films, is right at home with this sort of material and has uncovered a treasure trove of unfamiliar footage of wartime Hollywood.”

Not rated. Queue it up!

Netflix also has many of the wartime documentaries shown in the film, including John Ford’s The Battle of Midway (1942), William Wyler’s The Memphis Belle: A Story of a Flying Fortress (1944), and John Huston’s San Pietro (1945) and Let There Be Light (1946).

20th Century Women stars Annette Bening as a single mother of a teenage boy determined to give him good life lessons with the help of Elle Fanning, Greta Gerwig, and Billy Crudup. Benning earned an Oscar nomination for her performance (R).

Andrew Garfield and Adam Driver are Jesuit priests searching for their mentor in 17th century Japan in Silence, Martin Scorsese’s provocative drama of faith under fire, adapted from the novel by Shusaku Endo (R).

Pablo Larrain’s Neruda, a historical thriller through the lens of mythmaking and storytelling, is available on some Cable On Demand systems (but not Xfinity, which is my system) and on SVOD through most services. Reviewed on Stream On Demand here.

Also new: Patriots Day with Mark Wahlberg as a Boston cop at the 2013 Boston Marathon bombing (R), A Monster Calls, a drama of loss and healing starring Felicity Jones (PG-13), the comedy Why Him? with James Franco and Bryan Cranston (R), and the thrillers The Blackcoat’s Daughter with Emma Roberts and Kiernan Shipka (R) and Voice from the Stone with Emilia Clarke and Marton Csokas (R).

Available same day as select theaters nationwide is the Cold War-era spy thriller Despite the Falling Snow starring Rebecca Ferguson and Charles Dance (PG-13) and the comedy Is That a Gun in Your Pocket?… with Andrea Anders and Cloris Leachman (R).

Rooney Mara and Jason Segel star in the science fiction thriller The Discovery, a dark drama about the scientific discovery of the afterlife and how that reverberates through the present life. It co-stars Robert Redford, Riley Keough, Jesse Plemons, and Mary Steenburgen (not rated). It premiered at Sundance earlier this year is also getting a limited theatrical release

The new Netflix original series 13 Reasons Why, based on the young adult novel by Jay Asher, is a high school mystery around a teen suicide. 13 episodes now available, plus Beyond the Reasons, a discussion about the issues facing teenagers with the cast, producers, and mental professions.

More streaming TV: Better Call Saul: Season 2, the Breaking Bad prequel, arrives as the third season begins on cable. In fact, a lot of TV shows arrived at the end of April, among them the first season of American crime drama Rosewood with Morris Chestnut, the first two seasons of the sitcom The Carmichael Show: Season 1-2 with Jerrod Carmichael and the medical drama The Night Shift. Also new: the debut seasons of sitcoms Life in Pieces and Cooper Barrett’s Guide to Surviving Life, romantic drama Chesapeake Shores from the Hallmark Channel, Finish crime drama Bordertown, and the animated American comedy also called Bordertown from Comedy Central.

The sentimental Swedish comedy A Man Called Ove (2015), about an ill-tempered widower befriended by outgoing new neighbors, was nominated for two Oscars (PG-13, with subtitles).

From Finland comes Black Widows: Season 1, about the wives of career criminals who plot to kill their husbands.

Jeff Goldblum is back to battle the alien invasion in Independence Day: Resurgence (2016) and this time Liam Hemsworth is in the pilot’s seat (PG-13).

Dwayne Johnson narrates and produces Rock and a Hard Place, a documentary about the Boot Camp program for juvenile offenders in Miami-Dade County (not rated).

Ten Ingmar Bergman productions have been added to FilmStruck, including the six-hour TV mini-series version of Scenes from a Marriage (1973).

Newly available on The Criterion Channel is Ken Loach’s The Wind That Shakes the Barley (2006) and Kevin Macdonald’s documentary Touching the Void (2003).

Richard Rush’s The Stunt Man (1980) is one of the great movies about movies and features one of Peter O’Toole’s most spellbinding performances (R). Reviewed on Stream On Demand here.

The low-key comedy Lake Tahoe (Mexico, 2008) ambles along like a Mexican shaggy dog comedy in the Jim Jarmusch style (not rated, with subtitles)

The British mini-series comedy Asylum, starring Ben Miller as a political whistleblower stuck in an embassy where his presence drives everyone crazy, makes its American debut on Acorn.