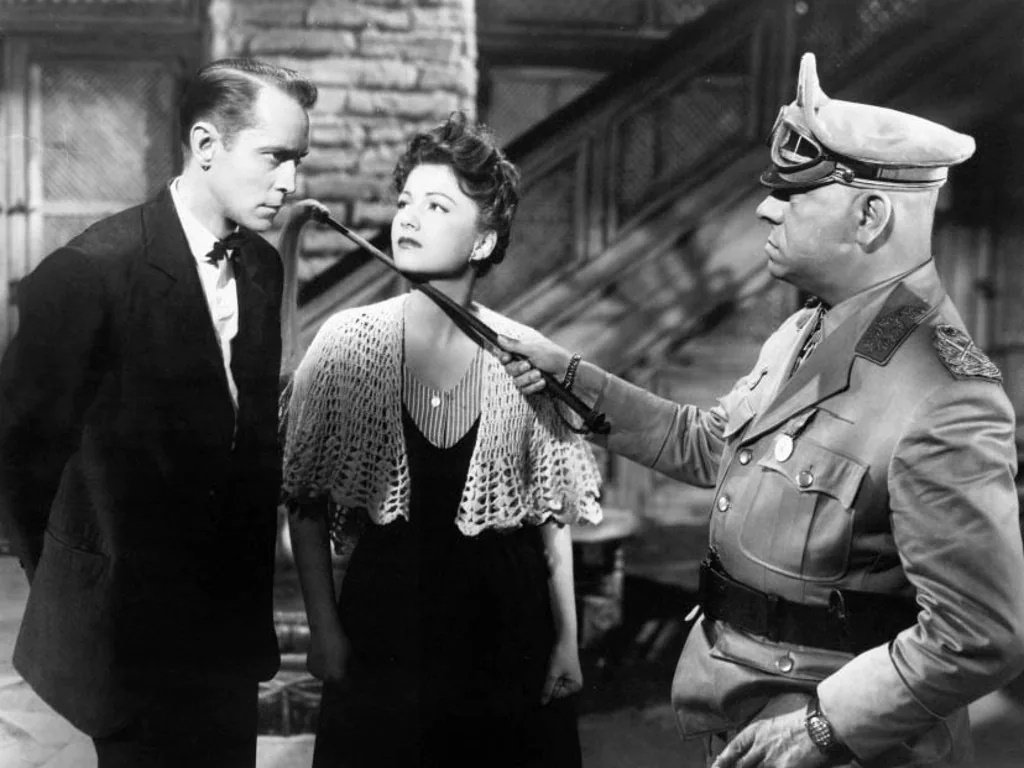 The World War II thriller Five Graves to Cairo (1943) opens with a stark, striking sequence: a lost British tank riding the sand dunes of Africa like an armored Flying Dutchman, the lifeless bodies of the crew swaying with each crest. Until one man wakes up, groggy and confused, and topples out of the tank and into the barren desert when he emerges for fresh air.

Franchot Tone plays the sole survivor, Corporal John Bramble, who is saved from the German army by an Egyptian hotel owner (Akim Tamiroff). Trapped behind enemy lines in a hotel claimed as a command center for arrival of Field Marshall Erwin Rommel (Erich von Stroheim), he poses as the waiter—who he discovers is also a Nazi double agent—and goes undercover to get Rommel’s invasion plans. Anne Baxter costars as the French chambermaid Mouche, a cynic who blames the British for her brother’s capture at Normandy, and Stroheim plays Rommel as a fastidious, aristocratic officer who plays the charming host to captured British officers while arrogantly snubbing his Italian ally (Fortunio Bonanova as the opera-singing Italian General).

Five Graves to Cairo is the second directorial feature from Billy Wilder, who made his name in Hollywood as a writer of witty and sophisticated screenplays. He’s best known today as a director of such comedies as The Seven Year Itch and Some Like it Hot, films with an edge of social satire and a dollop of sex, but he was equally adept at dramas and thrillers (see Double Indemnity).

For this production, Wilder and cowriter Charles Brackett updated a 1917 Hungarian play from World War I to World War II and relocated the action to 1942 North Africa during the British retreat from Field Marshall Rommel’s advance through the desert, which was still fresh enough for the first audiences to practically be current events. While its stage origins are evident as the espionage thriller plays out in the close quarters of a crumbling desert hotel and our amateur spy uses his wits and wiles to keep up his identity, Wilder keeps the tension taut with his crisp direction and measured pacing. The sharp black and white cinematography by John Seitz gives the battered hotel adrift in a sea of sand its own identity, and it earned one of the film’s three Oscar nominations.

Back in 1943, the film had a ripped-from-the-headlines immediacy. Today it plays as a smart, well-tuned World War II thriller with a terrific cast of characters actors and a sharp wit.

Leaves Criterion Channel at then of August. Add to My List