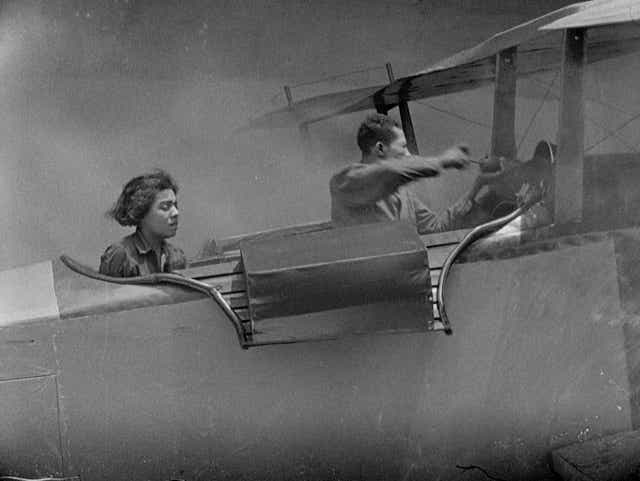 The Flying Ace (1926) presents a hero otherwise unheard of on American movie screens in the first half of the 20th century: an African-American war hero and aviator who owns his own plane and hires himself out a freelance flier.

J. Laurence Criner, a stage actor and veteran of a Harlem’s prestigious all-black theater troupe The Lafayette Players, is Captain Billy Stokes, the handsome (if somewhat stiff) hero and romantic lead. This aviation melodrama was shot so cheaply it couldn’t afford any actual flying scenes; apart from a few shots of a biplane taxing on a grass runway, the flight scenes are suggested with characters in prop planes against an unmoving white wall (the white patch is a dead giveaway) while wind machines blow.

It demands a certain suspension of disbelief but it pays off nicely. Not in the plot, a mystery with a convoluted plot and a tiresome resolution, but in Billy’s sidekick Peg (Steve Reynolds), a one-legged mechanic who uses his crutch as a comic prop as much as a tool. He uses it to pump a bicycle in a chase sequence, and then mounts it on the handlebars to reveal a hidden rifle!

The film was produced by the Florida-based Norman Studios and, though director/producer Richard E. Norman was white, the cast is entirely African-American and its portrayal of a black aviator was an inspiration to audiences who wouldn’t see another black flier on the screen for decades.

It’s been mastered from the best available elements preserved at The Library of Congress, George Eastman Museum, Museum of Modern Art, UCLA Film and Television Archive, and other archives. Preservation came late to the film, which was independently produced and essentially orphaned after its theatrical run, and it has not undergone extensive restoration. It has, however, been professionally mastered from the best existing materials, which mean that damage and wear is visible but there is clarity to the image. Do not expect a pristine presentation. The film shows the evidence of it tour of duty through the (mostly southern) “race films” circuit.

Also on Blu-ray and DVD and on SVOD through Amazon Video, iTunes, GooglePlay, Fandango, Vudu and/or other services. Availability may vary by service.
Pioneers of African American Cinema (5 Discs) [Blu-ray]