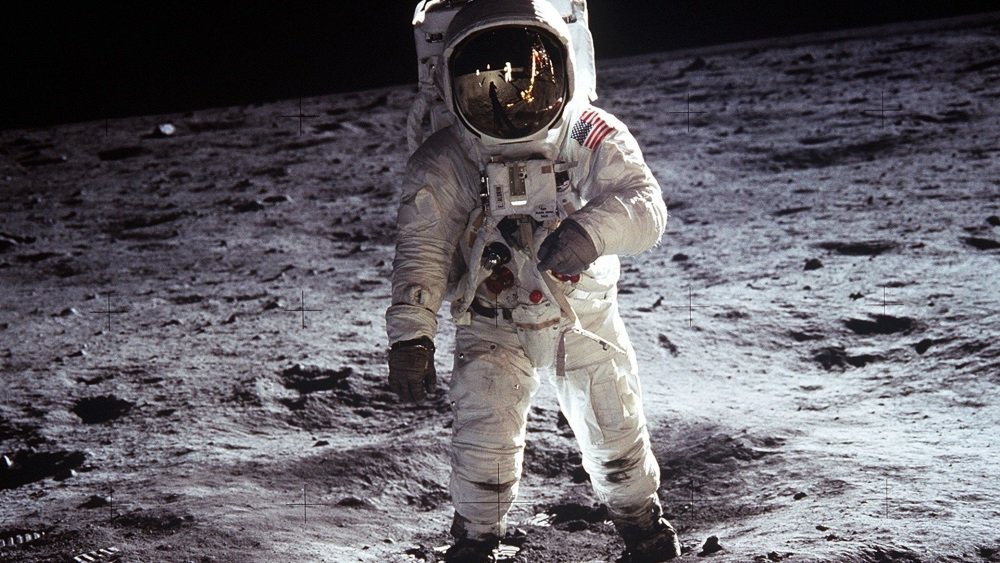 For All Mankind (1989), Al Reinert’s celebration of the nine manned space flights between 1968 and 1972, was released to theaters in 1989, twenty years after first manned moon landing. It’s a stunning tribute composed entirely of the film documentation shot and archived by NASA, not a documentary of an Apollo mission but the story of man’s odyssey to the moon, with all of the space shots intercut into a single journey, from pre-launch to space flight to exploring the moon to the splashdown back on Earth, accompanied by a mix of live communications transmissions and reflective interviews with twelve of the astronauts.

It remains the most evocative and inspiring portrait of the moon shots ever made. Along with the familiar video footage sent back for broadcast is spectacular imagery on amazingly sharp and detailed film footage that had been previously unseen before Reinert dug it out of the archives. The sheer power of the lift-off and the inferno of the fiery blast, the ethereal and majestic views of the Earth from increasingly greater distances away, the eerily alien gray topography of the moon… the real thing is far more impressive than any CGI effect created by Hollywood. Brian Eno composed the appropriately spacey score.

and other services. Availability may vary by service. Disc supplements explored below the trailer.
For All Mankind [DVD]

For All Mankind [Blu-ray]

The Criterion disc release, remastered in HD for Blu-ray in 2010, features commentary by Al Reinert (who begins with the rather modest explanation “I found this film in the NASA archives and pieced it together”) and Apollo 17 commander Eugene A. Cernan (the last man to set foot on the Moon) and the 32-minute documentary “An Accidental Gift,” which explores the legacy of the NASA filmed archives and Reinert’s creative approach to the film. “The idea of compositing all of the lunar flights into basically one flight grew out of the film itself,” he explains, sifting through the footage and seeing the differences between the lunar missions as “Seven takes of the same script.” Also includes a collection of video interview clips featuring fifteen Apollo astronauts and a video program of astronaut Alan Bean’s artwork, among other supplements, and the accompanying booklet features a new essay by Terrence Rafferty.