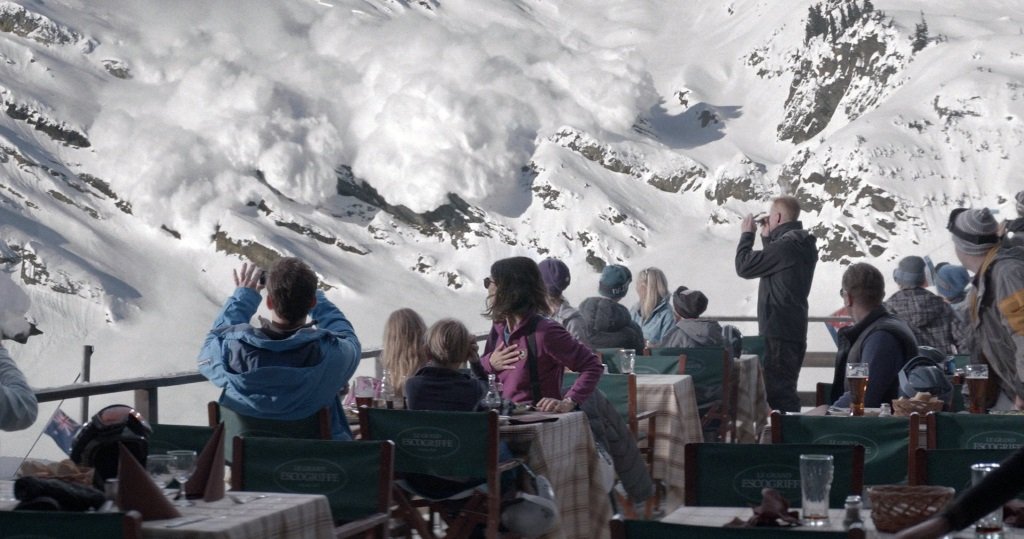 One of the surprises in the 2015 Oscar nominations was that Force Majeure (Sweden, 2014), Sweden’s official entry for the foreign language film category and a Cannes film festival winner, did not place among the five nominated films.

Director Ruben Östlund gives us a family on vacation and what appears to be the inciting event of a disaster film, but in fact the killer avalanche is merely an illusion (though one so dramatic it gets your adrenaline flowing). The real drama is the panicked response of the husband (Johannes Kuhnke) and the fallout through the rest of the vacation, which Östlund explores with a dark sense of humor.

The resentment of his wife (Lisa Loven Kongsli) is topped only by her indignation over his denial, which leads to a kind of public shaming, a scene of social awkwardness spiked with discomforting laughs. Even funnier is his attempt to evoke sympathy with an emotional display that is utterly, shamelessly contrived. Just like his instinctive flight from danger, he doesn’t seem able to muster the proper response of a caring, protective husband and father. But is insincere? Östlund doesn’t judge. He’s more interested in questioning the expectations and obligations and starting a discussion that audiences can carry on after the film ends.

Rated R, in Swedish with some English and French dialogue and English subtitles

Add to My List on MUBI or stream free on Kanopy, which is available through most public and college library systems.

, iTunes, GooglePlay and/or other services. Availability may vary by service.
Force Majeure [Blu-ray]

The Blu-ray and DVD from Magnolia features video interviews with director Ruben Östlund and actor Johannes Kuhnke and a promotional featurette.