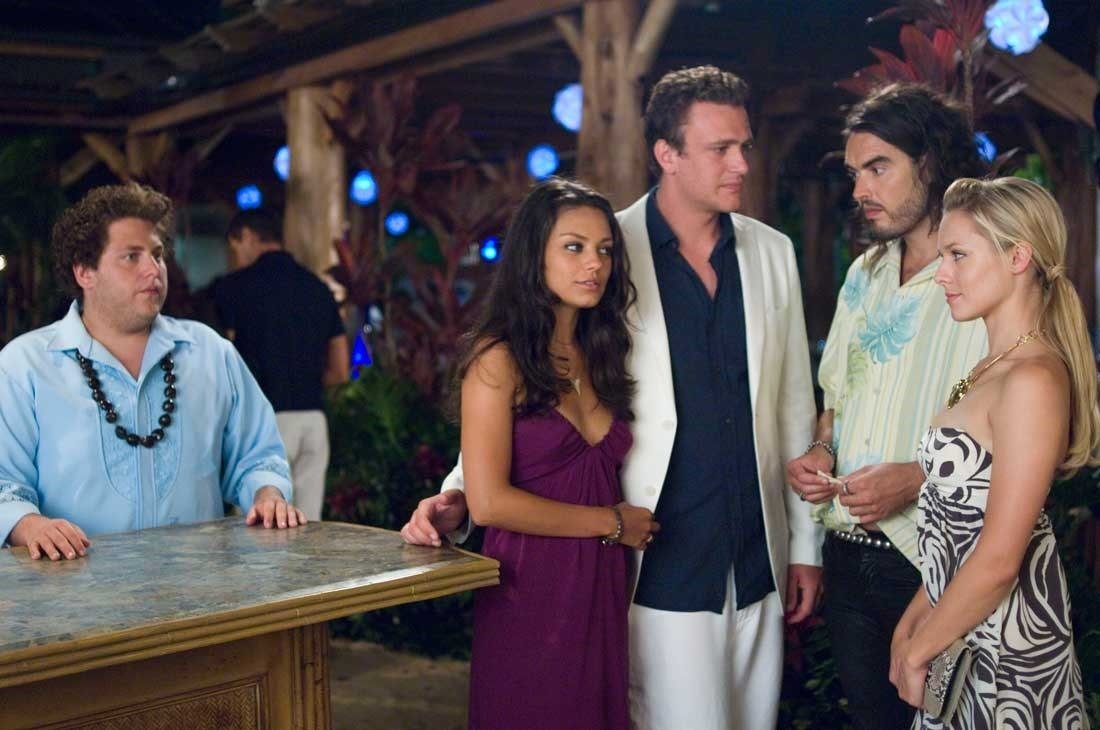 Jason Segel joined the ranks of Freaks and Geeks alumni who went on to successful writing and/or directing careers (the list includes James Franco, Seth Rogan, and John Francis Daley) with Forgetting Sarah Marshall (2008), which he wrote and starred in for producer Judd Apatow.

It’s a plot you can recount in a sentence—a guy goes on vacation to forget the girlfriend who just dumped him and ends up stuck in the same hotel where she’s with her famous new boyfriend—that Segal develops into a very funny comedy about heartbreak, humiliation (Segel plays the break-up scene naked) and recovery. Segel’s Peter is a TV composer who takes the Hawaii vacation he was planning to share with Sarah (Kristen Bell)—I mean, it was already booked and paid for—and end up next door to his ex and her new guy (Russell Brand), a womanizing pop star with a very loose concept of commitment. Mila Kunis co-stars as a local girl who tries to rouse him from his obsessive funk and crying jags.

This is one of the better Apatow factory films that uses juvenile humor to explore adult issues like sex and commitment and relationships. Comedy is pain plus punchlines, and Peter’s emotional pain of breakup and heartbreak is very funny at times, at least his expressions of and responses to pain. But it’s also about sex as an escape, sex as an avoidance, sex as a duty, and finally sex as a sharing of affection between two people. And it doesn’t divide up between good guys and bad guys. Sure, Sarah was a little controlling and pushy, but she was also the one taking care of an immature Peter all through their relationship. They both have issues to work on.

There’s a pretty sharp look at young adult relationships, sex, commitment and self-confidence beneath the foul language and the goofy humor, and there’s a Dracula rock opera for puppets that Segel performs through the film. And a great supporting cast of familiar Apatow faces riff around the edges: Bill Hader as the overly chipper brother-in-law nudging Peter to move on, Paul Rudd as a zoned-out surf instructor, Jonah Hill as the restaurant greeter who fawns over the rock star.

Being an Apatow production, the DVD and Blu-ray editions are filled with playful supplements, including deleted and extended scenes and bite-sized featurettes (the making of the puppet musical walks a fine line between seriousness and spoof), as well as both original R and extended unrated versions plus a bonus digital copy which can be downloaded to PC, iPod or other compatible players. The 3-disc DVD set features exclusive cast auditions, bonus footage and a cable featurette. Exclusive to the Blu-ray version is video commentary (which just adds a picture-in-picture component to the audio commentary), karaoke, and “U-Control” picture-in-picture interview clips and behind-the-scene footage of select scenes.