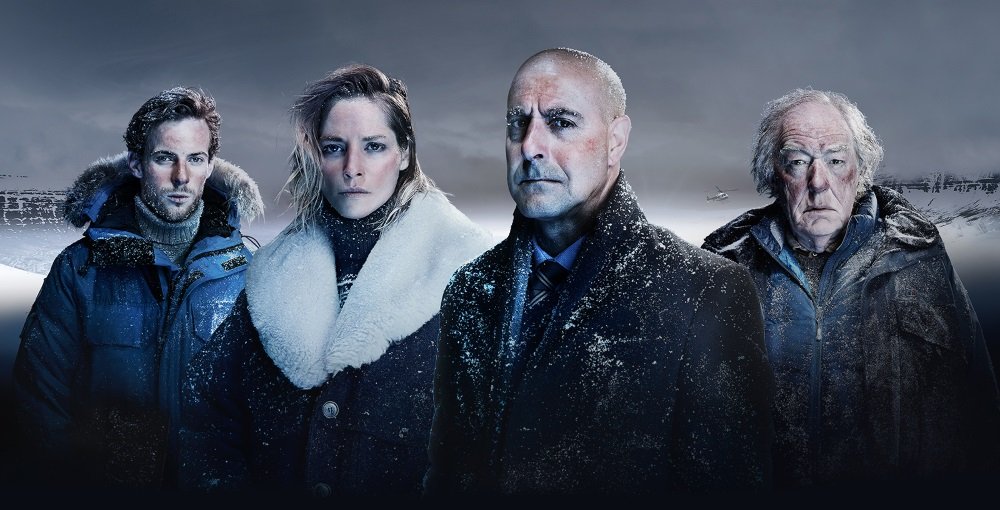 Fortitude, a British-American co-production set on a remote Norwegian island in the Arctic Circle, shot largely on location in Iceland, and featuring an international cast, begins as a murder mystery and turns into something closer to biological horror. The town of Fortitude is called “the safest place on Earth” for its almost non-existent crime (the local cops are kept busy with search and rescue operations) and the island governor (Danish actress Sofie Gråbøl) has announced a new multi-million dollar project to attract tourists when a local biologist (Christopher Eccleston) is discovered brutally murdered in his home. As the island Sheriff (Richard Dormer) fumbles around the investigation, Britain sends their own man, an American working for Scotland Yard (Stanley Tucci), to “help” with the case, which puts everyone’s backs up. In this town, it seems everyone has dark secrets and ulterior motives. What makes it different from other British small town mysteries is that no one really cares about those pasts. Fortitude is a place where people start again and no one asks questions.

Tucci is not the star per se—he’s not even necessarily the first among equals in the ensemble—but he stands out in an excellent cast as a guarded professional whose appearance on the island is so sudden that the locals wonder how British authorities found out so fast and why they fast-tracked their man into the case. There’s a ruthless drive under his cool-headed exterior—he puts a kid through unimaginable pain to ask questions that may not even help the investigation—that sets him even farther afield of the locals, who all have their issues but are always protective of their own. Dormer’s gruff Sheriff is both protagonist and suspect and his hostility to Tucci’s DCI just makes him more suspicious. The island Governor is equally suspect as she courts investors for the island’s proposed glacier hotel, a project potentially threatened by a report that the murdered biologist was working up.

This show has a big cast and a lot of stories, including a young boy whose mysterious illness may be connected to a recently uncovered fossil and the sudden spate of polar bear attacks. The discovery of an ancient parasite, released from the frozen remains of prehistoric creatures by opportunistic fossil hunters, turns the murder mystery into a biological thriller with horror movie dimensions: this parasite turns its hosts violent before killing them. Call it Nordic Noir, with dark shadows of suspicion in a blinding white landscape. It features a superb cast (Michael Gambon, Luke Treadaway, Sienna Guillory, and Verónica Echegui also stand out), a novel setting, a slow-burn mystery, and a fascinating story that roots the viral horror in a real world setting.

The series is a production of Britain’s Sky Atlantic that played in the U.S. on the cable channel Pivot, which few people are even aware of, let alone watch. So even with uniformly good reviews and a DVD release, this show hasn’t been seen much stateside. Now is your chance. A second series has been announced.