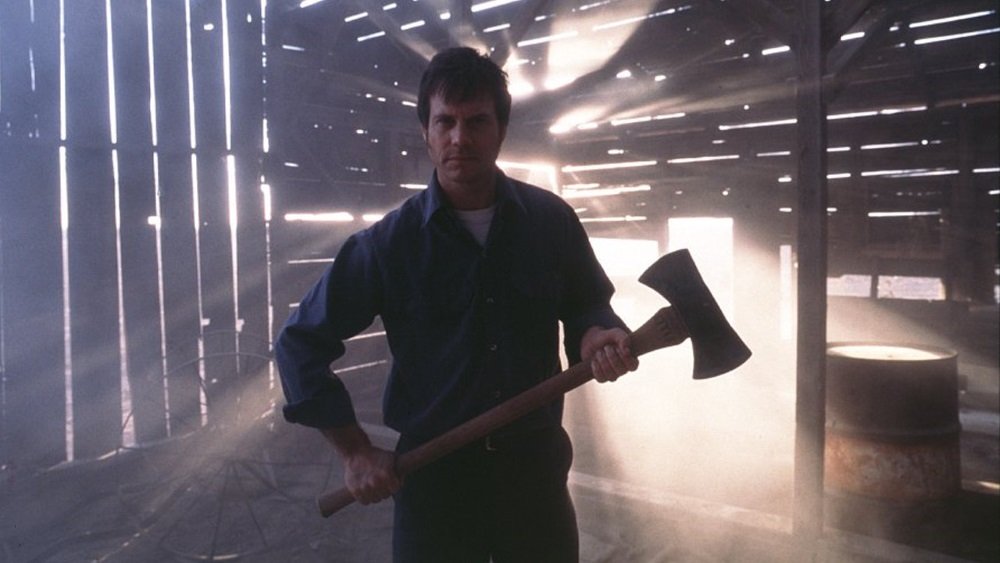 Bill Paxton left a great legacy of screen characters behind when he passed away earlier this year. What isn’t as well known is that Paxton also directed films.

Frailty (2001) is his directorial debut and it is marvelously off-balance and under-the-skin creepy from the first few minutes. It’s a southern gothic take on the serial killer thriller and puts us in the position of the emotionally tortured son (Matthew O’Leary) of a blue collar joe (Bill Paxton) turned fanatical executioner following the instructions of God: divine whispers and holy visions.

It’s all told in flashback on a particularly gloomy night, by grown son Matthew McConaughey to FBI agent Powers Booth. Paxton, who directs (it’s his debut feature) as well as stars, paints it in dungeon gray and all the colors of the night, and keeps the film rooted in a madness which he refuses to reveal as either divine or demonic. But it’s his performance that seals the deal: his intent, straight-ahead, good-dad-gone-God’s-assassin delivery makes him utterly sincere, and thus terrifying.

and other services. Availability may vary by service.
Frailty [DVD]

The Blu-ray and DVD releases are both packed supplements, beginning with three commentary tracks. The “production” track by producer David Kirschner with editor Arnold Glassman and composer Brian Tyler is the most informative and interesting; the three keep it active with insights, observations, and interruptions, comparing notes while taking us from inspiration to practical creation to effect in the finished film, and back again. The other two are tyro director Bill Paxton (dutiful but lackluster) and writer Brent Hanley. The 20-minute featurette “The Making of Frailty” is a decent and conventional overview while the 26-minute made-for-Sundance Channel “Anatomy of a Scene: Frailty” delves into a few key scenes in more interesting detail. Also features deleted scenes, stills gallery, and the trailer