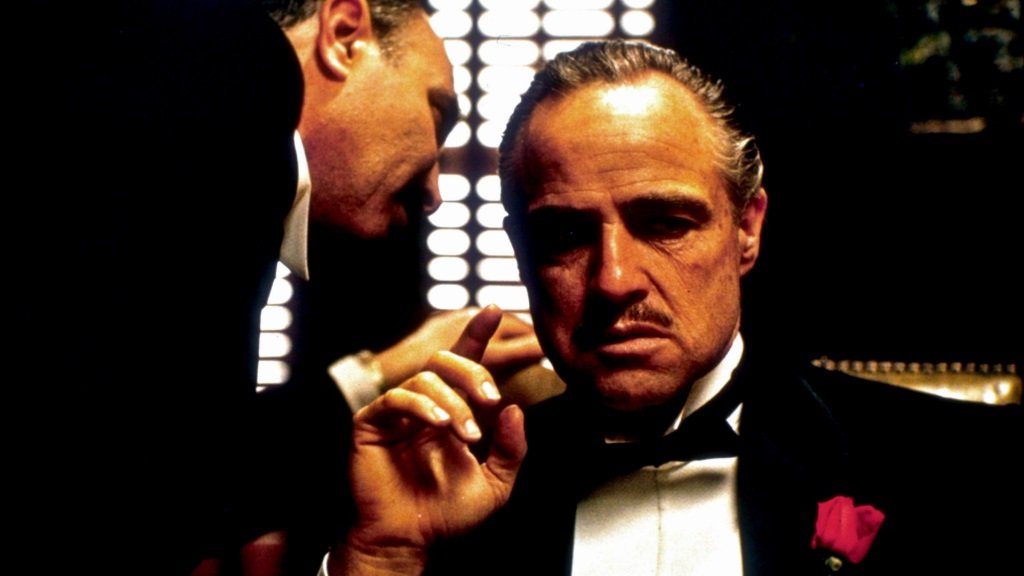 Francis Ford Coppola’s adaptation of Mario Puzo’s bestseller remains the great American epic of the immigrant dream turned family business. Al Pacino stars as Michael Corleone, the clean-cut white sheep and patriotic soldier boy son of New York Godfather Vito Corleone (Marlon Brando in an Oscar–winning performance), and this dark side of the American dream story chronicles his rise to ruthless mob leader as modern American businessman. This criminal enterprise is just another side of big business and Michael sets himself to pull his family’s tentacles from the criminal world and into legitimacy.

The Godfather (1972, R) has become the great evocation of the dark side of the American Dream (“I believe in America,” it begins), a (justly) revered cinematic masterpiece and a part of American culture. It’s hard to believe Paramount just wanted a quick exploitation knock-off, at least until Puzo’s novel became a national best-seller. James Caan and John Cazale costar as Michael’s older brothers Sonny and Fredo, Talia Shire his sister, Diane Keaton his fiancée Kay, and Robert Duvall the family consigliere and adopted brother Tom Hagen.

Both films won multiple Oscars, including Best Picture, and Coppola picked up a Best Director award for Part II. Separately the films are masterpieces. Together, they are a landmark work of American cinema.

Fifteen years later, Coppola returned to the Corleone clan with The Godfather: Part III (1990, R), a somber look at Michael’s efforts to find redemption and pass the torch to the next generation. Andy Garcia, Bridget Fonda, Sofia Coppola, and Joe Mantegna co-star in this final chapter, with George Hamilton taking the Duvall role. The film was a disappointment but Coppola reworked it thirty years later as The Godfather Coda: The Death of Michael Corleone (1990/2020, R), which somewhat refocuses the film.

“Leave the gun. Take the canoli.”

The Godfather placed in the number 12 spot in the 2022 Sight & Sound Greatest Films of All Time poll.

The Godfather: The Coppola Restoration [DVD]

Francis Ford Coppola oversaw the restorations and remastering of the films for the Blu-ray and DVD special editions. Both sets features commentary by Coppola on all three films, full of illuminating stories about his approach, his actors, how scenes developed, and how he was constantly working under the pressure of hawk-like producers with a different vision of the project, and the beautiful 1991 feature length documentary The Godfather Family: A Look Inside, a combination “making of” and rumination on the Godfather films and one of the best behind the scenes documentaries ever made.

Also features featurettes spotlighting the work of composers Nino Rota and Carmine Coppola and cinematographer Gordon Willis (in a scene excerpted from the documentary Visions of Light), a tour through “Francis Coppola’s Notebook” (his collected prompt-book of thoughts, ideas, and insights that guided him through the scriptwriting and production), “Coppola and Puzo on Screenwriting,” a ten minute featurette about their collaboration, and a faded, scratchy print of the original 1971 9-minute featurette “Godfather: Behind the Scenes.” There’s deleted footage (including some scenes featured in the re-edited 1977 The Godfather Saga mini-series) organized chronologically through the timeline (rather than by film), rehearsal footage, Academy Award acceptance speeches, stills, storyboards, a Godfather timeline and Corleone family tree, cast and crew bios, and all the Godfather trailers you could hope for.

Exclusive to the new Blu-ray edition are the half-hour “The Masterpiece that Almost Wasn’t” and the restoration overview “Emulsional Rescue.” It’s an offer you can’t refuse.