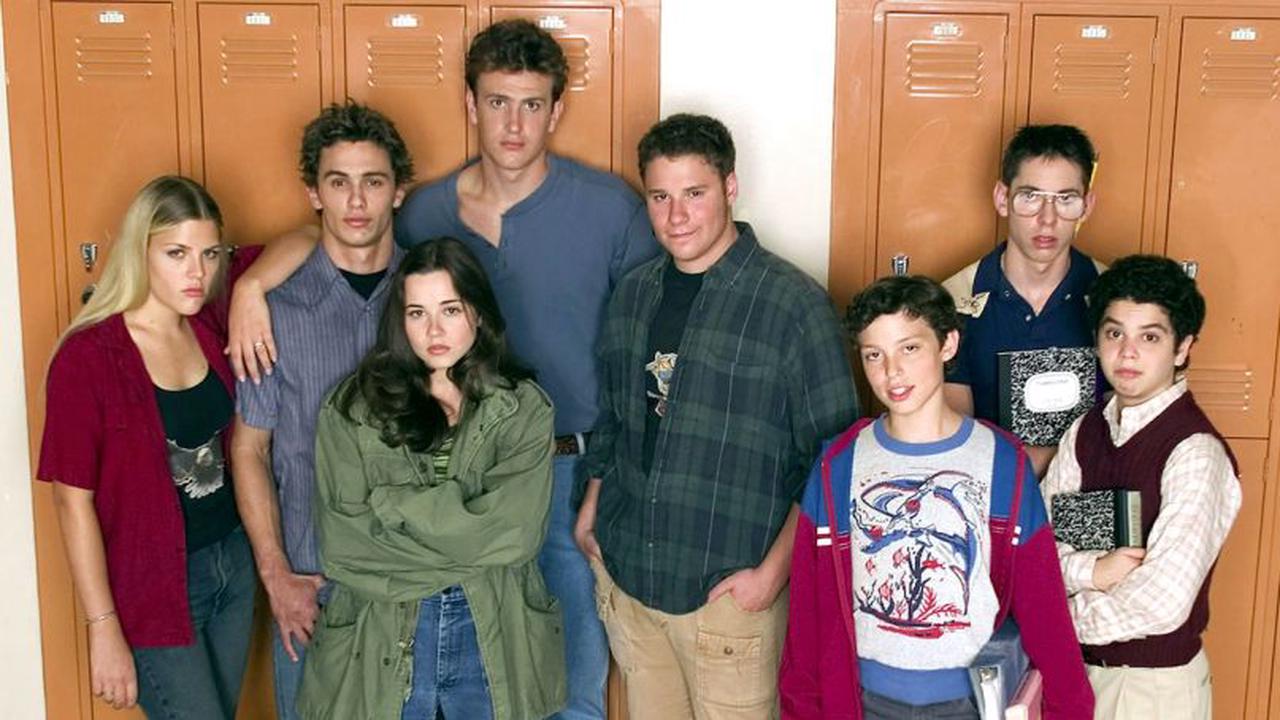 Somewhere between Dawson’s Creek and Booksmart is the sharp, funny, and surprisingly poignant high school dram-edy (for lack of a better word) Freaks and Geeks (1999-2000).

Linda Cardellini grounds the series as Junior Lindsay, the former class brain who rejects her place in the school hierarchy and, in startling identity crisis, gravitates toward the school “freaks,” a group of stoners, under-acheivers, and minor key rebels, sort-of led by charismatic rebel without a clue Daniel (James Franco, looking perpetually stoned). Jason Segel, Seth Rogen, and Busy Philipps fill out the ranks of the Freaks. Meanwhile her Freshman brother Sam (John Francis Daley) is a Steve Martin-quoting, Dungeons and Dragons-playing, skinny little “geek,” hanging with his friends (Samm Levine and Martin Starr), pining for a pretty cheerleader, and trying to duck the mean-spirited pranks and hazing aimed in his direction.

Set in 1980 Michigan and executed with a brilliant sense of fashion, music, and pop-culture zeitgeist, the hour long show is no sitcom (though it’s funnier than most), and the humor is often a sneaky way to explore the pain of teenage social nightmares, from the bullying, humiliating torments of bigger and older students to crushes, dating, and the social rites of passage that put kids on stage without giving them the script.

It’s compassionate without losing itself in sentimentality and understanding of the crises that drive these kids to their often self-destructive behavior without letting them off the hook for their decisions. No show on TV better captured the subtleties or the dynamics of the high school caste system.

The show was created by Paul Feig (Bridemaids) and produced by Judd Apatow (before he started directing films like The 40-Year-Old Virgin and Knocked Up). It launched the careers of its young cast and four of stars became writers and filmmakers in their own right: Seth Rogen (who went on to write TV and film scripts for Apatow’s), Jason Segel, John Francis Daley, and of course James Franco.

It won an Emmy Award for outstanding casting and creator Paul Feig earned two nominations for his scripts.

The show garnered rave reviews but small audiences and sadly ran only one season. NBC rearranged the episode order on its original broadcast (which didn’t help things) and cancelled the show before the final episodes ran.

Because of the dense use of period songs and expensive music rights, the show was released to home video with some songs replaced. Hulu presents the complete run of the show with the original soundtrack completely intact and the episodes in the proper intended order.

Also on Blu-ray and DVD and on SVOD through Amazon Video, iTunes, GooglePlay, Fandango, Vudu and/or other services. Availability may vary by service.
Freaks and Geeks: The Complete Series [Blu-ray]

The pilot episode features a longer “director’s cut” with footage not seen on TV and the entire series, all 18 produced episodes (of which only 15 were originally shown on NBC before it was yanked from the schedule for good), is returned to the intended broadcast order. The finale is a satisfying and moving open-ended conclusion that leaves the characters stretching themselves to the future in moments of discovery and defiance. Watch for Ben Stiller in an uncredited cameo as a frustrated Secret Service agent in “The Little Things.”

This new “Yearbook” edition includes all the original supplements plus two bonus discs with even more deleted scenes, actor auditions (see Linda Cardellini and Busy Phillips swap roles) and other raw footage and behind-the-scenes clips (including the complete table reads of three episodes). My favorite addition to the set is the Q&A at the Museum of TV and Radio in 2000, a 70-minute featurette with Feig, Apatow, director Jake Kasdan and half a dozen cast members (worth it just to see Seth Rogen giggle like a goof as he riffs on stage). The case is a mock yearbook, an 80-page tome with photos and essays and remembrances along with the very detailed episode guide reprinted from the original release.

The Blu-ray features all of these plus choice of the show in its original 1.37:1 TV format or reformatted for widescreen TVs.