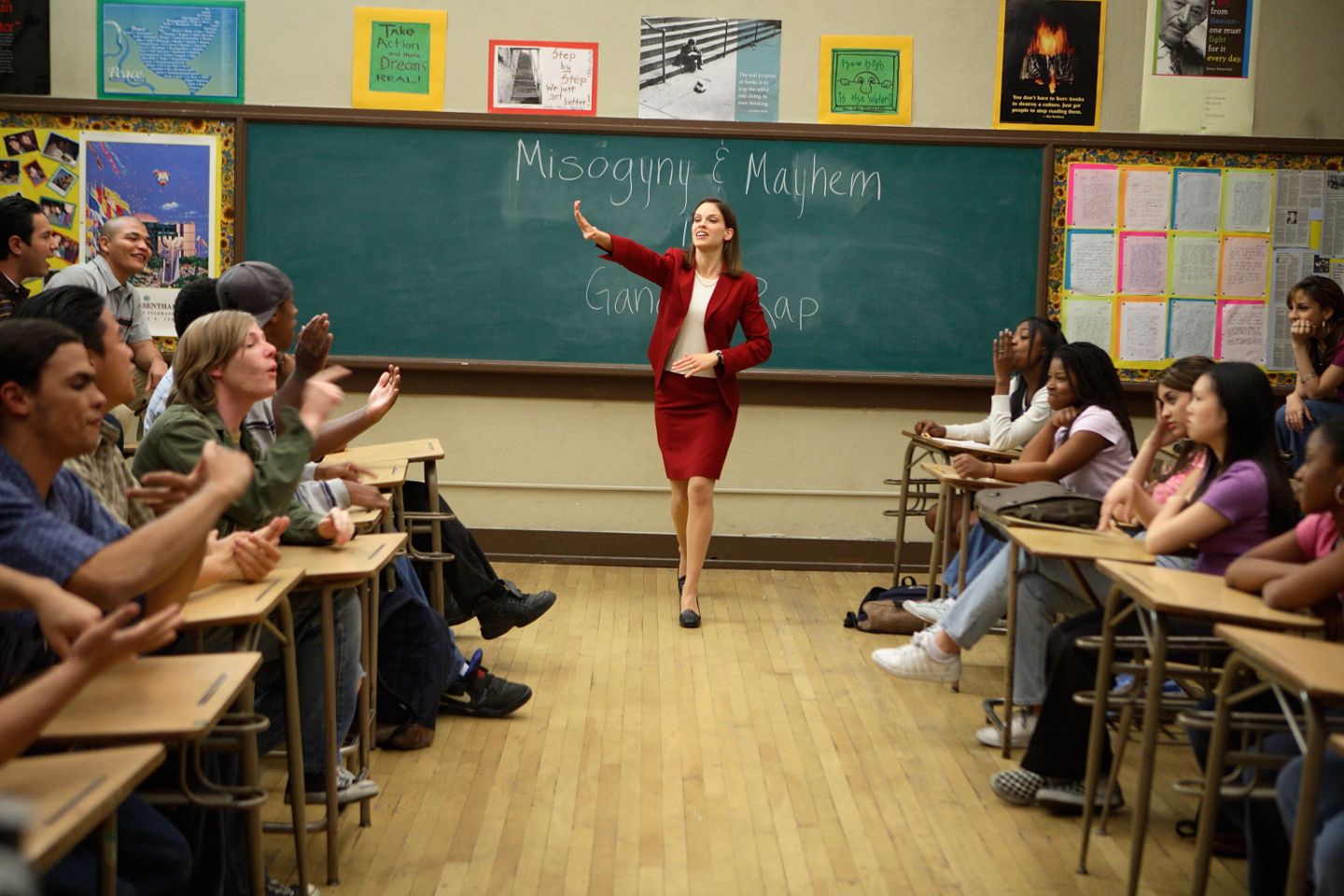 MTV Films found a niche in the early 2000s with by missing inner-city dramas with youth culture in a way that most studio dramas never quite manage. Freedom Writers (2007), based on the true story of Erin Gruwell, is one of their best, a perfect match of subject and studio.

Hillary Swank plays Gruwell, an idealistic first year teacher and daughter of a civil rights activist who tries to make a difference by taking her first job in a volatile inner-city Los Angeles high school. Like Glenn Ford in The Blackboard Jungle or Sidney Poitier in the unruly West End London classroom of To Sir, with Love, Gruwell hasn’t a clue to what she’s getting into. But she cares, she’s determined, and she perseveres, battling intransigent veterans and an unmoving bureaucracy every step of the way.

She’s also real, and for all the dramatic license that writer/director Richard LaGravenese takes in his film, her story—and the stories of her students—are moving.

When the traditional curriculum and classroom model fail to reach her integrated but racially polarized classroom, Gruwell does something surprising: she invites them to tell her their stories. In return, she introduces them to the lives of others through history and literature, giving them the tools to imagine a better life for themselves.

LaGravenese tends to simplify and lean on the melodrama but he tells the stories of the students with compassion, notably Eve (April Lee Hernandez), who has grown up in a war zone of an inner city defined by ethnic boundaries. The film gives an articulate voice to both her and her classmates, who suppress their inner lives under street-hardened toughness and segregate themselves into tribes in the tense neutral zone of the high school.

The tale of triumph comes at a price that the film isn’t equipped to confront, however, and I don’t mean just the sacrifice of her marriage and her every waking moment. The investment prevents her from ever repeating the success and the lesson of the film becomes an unintended mixed message. We can cheer the triumph of these lucky few, but the film all but proclaims that her experiment is an exception. If it takes the total commitment of an extraordinary individual to reach students, then isolated success is all we can expect from this broken system.

, iTunes, GooglePlay and/or other services. Availability may vary by service.
Freedom Writers [Blu-ray]