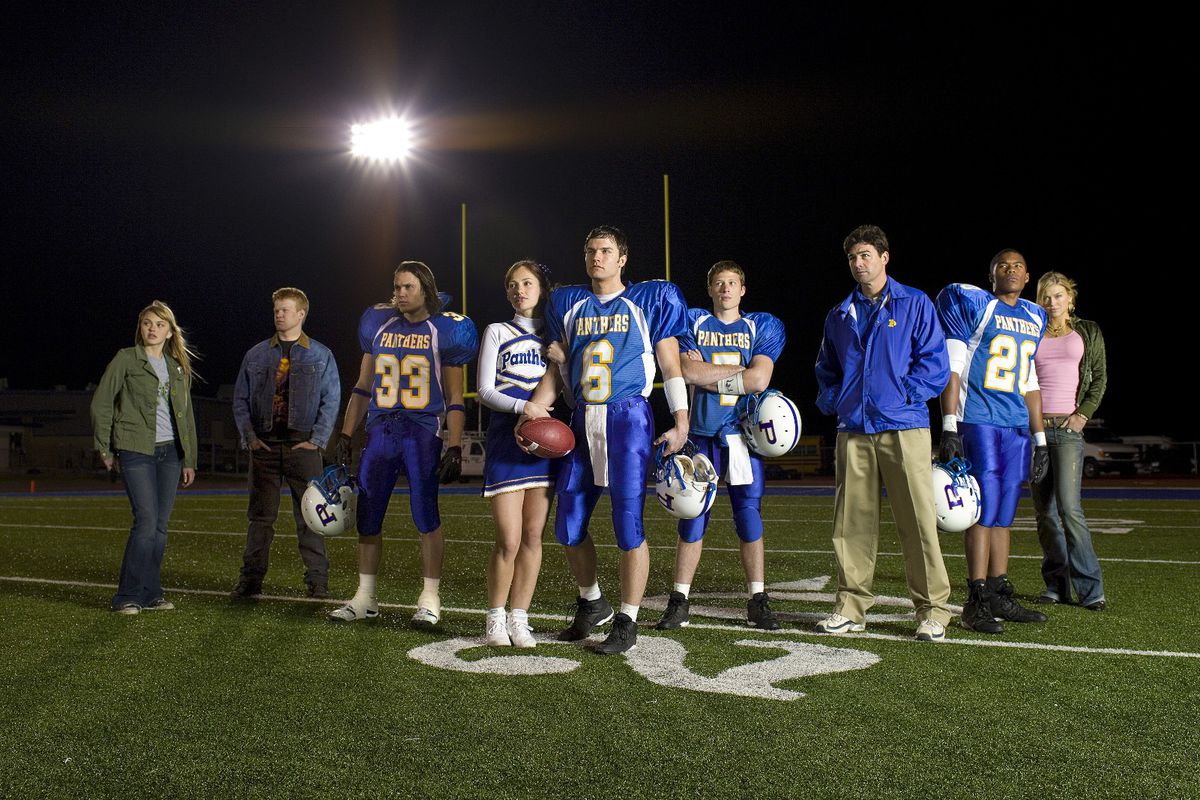 “Friday Night Lights” was a best-selling book and a well-received feature film before director Peter Berg teamed up with showrunner Jason Katims to bring the project to television for an acclaimed series.

Friday Night Lights: Complete Series (2006-2011) never grabbed big ratings but racked up solid reviews and passionate viewers and earned a second life when DirecTV partnered up with NBC for a unique broadcast model that kept it going through five seasons (albeit in the shorter, cable-styled seasons).

Kyle Chandler stars as Eric Taylor, the new head coach at West Dillon High School, the championship team in a small Texas town that eats, drinks, and breathes football and isn’t shy about telling him exactly what he’s doing wrong every time to steps out into public. Connie Britton reprises her role from the film as his supportive but independent-minded wife, Tami, a high school counselor devoted to her students, which sometimes puts her in conflict with Eric. They form the foundation of the family drama along with their teenage daughter teenage daughter Julie (Aimee Teegarden).

The rest of the show belongs to the drama on and off the gridiron and the show’s greatest hurdle was convincing viewers that it was not a sport drama, it was a drama about people whose lives were—for better and for worse—defined by sports. And that’s what the show did so well, and not just in triumph or defeat.

In Season One, the star quarterback (Scott Porter) is paralyzed on the field and confronts rehabilitation through the season. The unseasoned second string quarterback Matt (Zach Gilford) faces enormous pressure to fill his cleats. The rest of the players and other teens in their orbit are plagued by injury, arrogance, doubt, jealousy, guilt, racism (boldly addressed in the show), and the usual (and unusual) problems of high school teens. Taylor Kitsch plays fullback Tim Riggins, Minka Kelly is cheerleader and golden girl Lyla Garrity, Adrianne Palicki is high school bad girl Tyra, and Jessie Plemons is Matt’s best friend Landry.

Season Two opens with Eric Taylor coaching college ball far away in Austin while back home in Dillon, Tami gives birth to a baby girl and Julie hits the rebellious, surly years. The Dillon team is under the leadership of a controversial coach (Chris Mulkey) and morale is falling apart. A rather melodramatic subplot involving manslaughter and cover-up that is doomed to unravel marks the show’s low point but the rest of the season is more successful. More interesting is the story of arrogant star receiver “Smash” Williams (Gaius Charles), who pins his entire future on an NFL dream which is imperiled by his own hubris, and the unlikely journey of Dillon football booster and failed father Buddy Garrity (Brad Leland) from blustery blowhard to a man given a second chance at parental responsibility: he becomes guardian of a Hispanic teen out of reform school and ends up becoming a real father figure.

Despite glowing reviews and a passionate fan base, the show was on the verge of cancellation due to low ratings when the satellite company DirecTV stepped in to coproduced the show with NBC (in return for first showing episodes months before broadcast). Scaled back to 13 episodes, Season Three opens with Tami taking over as West Dillon High School principal and follows the members of the team as they start looking to their futures beyond high school.

Season Four begins with the redistricting of Dillon and redrawing the lines of the two school districts. Coach Taylor takes a job on the other side of town and rebuilds the defunct football program of East Dillon High from scratch in an economically depressed district while Tami remains as principal of West Dillon, where she collides with the football boosters. The change brings adds a whole new slate of characters and accompanying conflicts and issues and it ends, of course, with the rivalry match between the two schools, but along the way it provides plenty of human drama, from rivalries turned vicious to the stories of former football heroes in danger of getting stuck in dead-end lives.

Season Five, the final season of the show, focuses on a new class of student characters and ends with a smartly-written finale that finally gives Coach Taylor a sense of perspective about his own life, responsibilities, and choices outside of the great game of football. But I get ahead of myself. Taylor takes his fledgling East Dillon team on its sophomore season with a pledge to aim for State (no small feat coming off of a losing season, albeit one that ended with tremendous growth) and Tami, ousted as West Dillon principal, gives her all to turn the failing academic record of East Dillon around by engaging with its most at-risk students.

Fans get closure on some of their favorite characters from past seasons as they return for an episode or two: former QB turned art-school student Matt, one-time bad girl Tyra, former gridiron star Jason, and the droll goofball buddy Landry all drop by for an episode or two. Tim Riggins gets a very satisfying closure to his story when he returns from prison bitter and depressed, unable to let go of his anger toward his screw-up brother Billy (Derek Phillips), who is on his own road to redemption.

There’s still plenty of high school romance complications, sports star ego trips, anxieties, jealousies and other teenage dramas. But at its best, the show illustrates how team sports can encourage students, teach them leadership and life skills and give them a sense of accomplishment, and conversely how defining oneself so narrowly leaves so many former football heroes struggling for identity and careers long after their glory days are over. It also told stories of students struggling to deal with broken families, absent fathers, and failed role models and much of the show’s satisfaction comes from characters—adults and students both—who step up to take responsibility for themselves and others.

The expressions of pride and accomplishment in the show are authentic and impressive and Coach Taylor’s rousing locker-room speeches are prime-time Shakespeare but the unsung star of the show is Connie Britton. Her quiet dignity and resilience a mother, counselor, and dedicated principal in a school where sports are more valued than scholastics has a way of putting the coach’s problems into perceptive.

It was nominated for 13 Primetime Emmy Awards and won three during its run, including two in its final season, for actor Kyle Chandler and for Jason Katims’ writing.