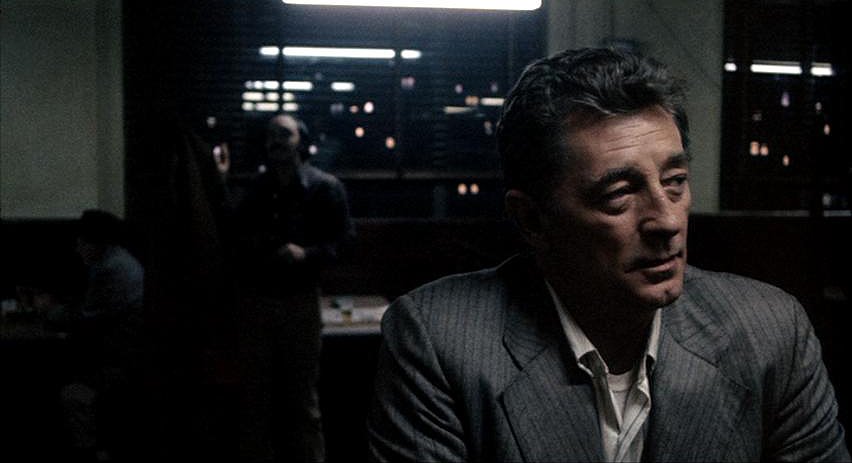 The Friends of Eddie Coyle (1973), adapted from the terrific novel by George V. Higgins and produced in the wake of The French Connection, is probably the least heralded crime movie classic of the seventies. Robert Mitchum is Eddie ‘Fingers’ Coyle, a middleman working the fringes of the Boston underworld while awaiting sentencing, which prompts him into a little side-action turning informer for a real wheeler-dealer of a detective (Richard Jordan in a pitch perfect performance).

Director Peter Yates finds the perfect pace for the film, never pushing the action, never forcing the tension, letting it all play out—and finally unravel—at the same pace that his characters live off the job. The characters are vivid without being eccentric: Peter Boyle is as forthright as he is impenetrable as a bartender with his fingers in plenty of schemes and Mitchum is at his best as a tired professional still hustling because it’s all he knows. And the dialogue is superb: every character comes out in their words, their stories, their ways of expression. Coyle explains his philosophy and the way he lives his life through the story of his extra knuckles (which is his nickname: Eddie Knuckles). The dialogue isn’t colorful in the Tarantino way of old movie exaggerated diction and defining stories, it’s lean and to the point, with a little flair but cut to the bone: spare and solid, never drawing attention to itself.

Shot in that distinctive mix of location naturalism and matter-of-fact criminal activity that defined so many such films of the early seventies, Eddie Coyle lays bare the food chain of the criminal underworld, from the robbers to the gun suppliers and all the middlemen in between, including the stool pigeons. This is the first film I can think of since Pickup on South Street that portrays the informer not just in a sympathetic light but as a natural, inevitable part of the social order.

There’s nothing showy about the film or the characters and Yates never pushes the deliberate care of their professional manner, which makes this practical perspective on survival all the more believable.

, iTunes, GooglePlay and/or other services. Availability may vary by service.
The Friends of Eddie Coyle (The Criterion Collection) [Blu-ray]

The Friends of Eddie Coyle (The Criterion Collection) [DVD]

For the Criterion Blu-ray and DVD, director Peter Yates sat down for the commentary track in 2009, dawdling through the film with affectionate remembrances (it’s still one his favorite of his films) and observations. Also features a booklet with a new essay by critic Kent Jones and a 1973 profile of Robert Mitchum originally written for “Rolling Stone” magazine.