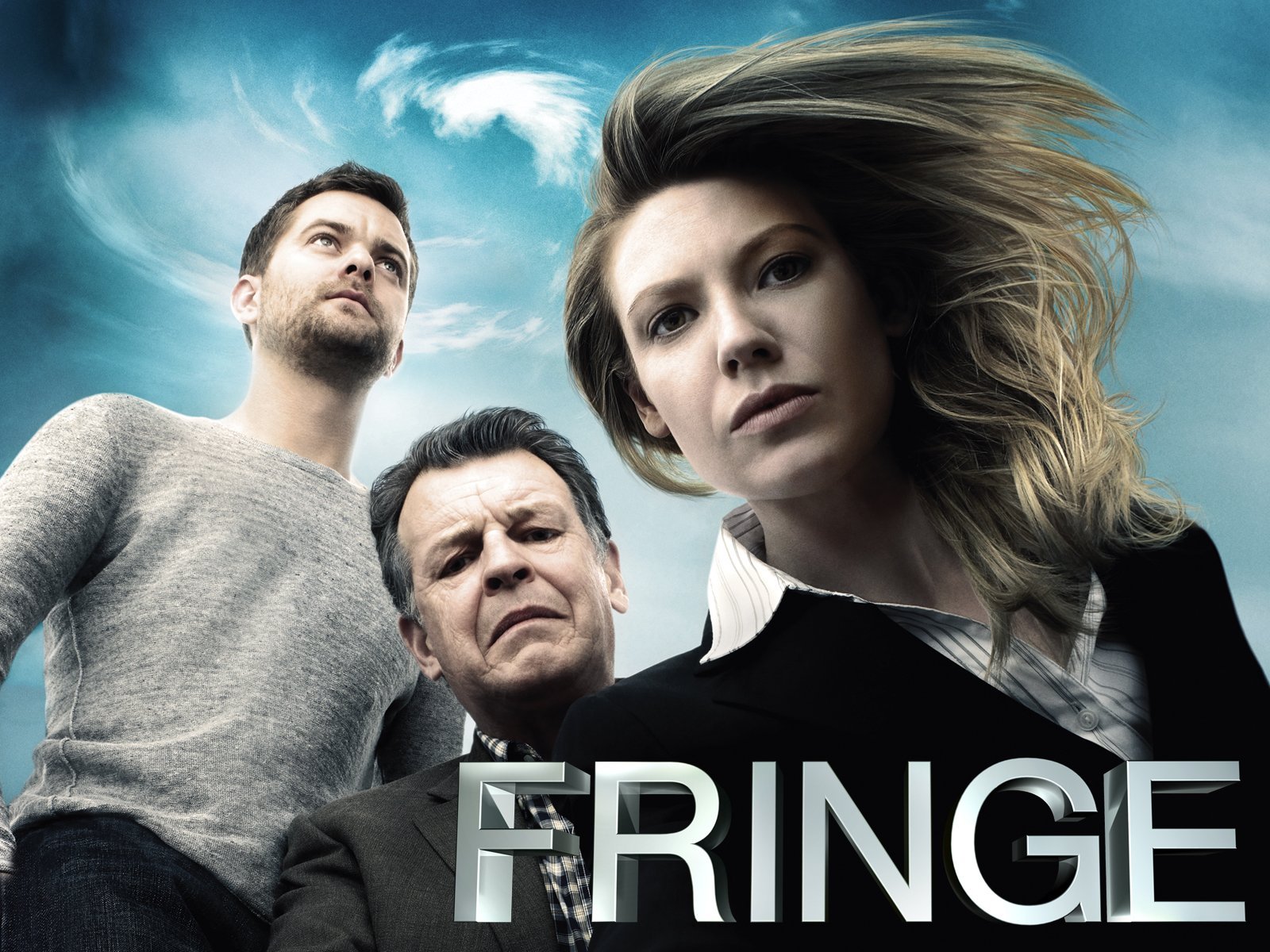 Anna Torv is FBI agent Olivia Dunham, the serious, straight-laced agent put in charge of a special unit dedicated to cases that defy rational explanation and conventional science, sort of a CSI team that Fox Muldar would have loved. Joshua Jackson is Peter Jackson, the happy-go-lucky rebel genius to her crisply dedicated agent. This guy is an international hustler who is pulled out of his underworld shenanigans by the feds to babysit his estranged father and the team’s star player: brilliant scientist Dr. Walter Bishop (John Noble), who is pulled out of the high security psychiatric facility where he’s lived in isolation for 17 years.

Lance Reddick plays Dunham’s boss, FBI Agent Broyles, whose job is as much about keeping the true nature of these cases covered up as it is understanding them, Jasika Nicole is Junior Agent Astrid Farnsworth, whose science background makes her perfect as both bodyguard and lab assistant to Bishop, and Blair Brown is Nina Sharp, head of a major tech company and advisor to the team.

Created by J.J. Abrams, Alex Kurtzman, and Roberto Orci, this is a show where freaky things happen on a weekly basis (Astral projection! Teleportation! Interdimensional travel! Humans transformed into hideous mutant creatures!), but the dark style and grave tone of the show is mellowed by Noble’s lithe performance as the eccentric, morally abstract genius whose mind fires in all directions at once and whose shaky social skills have long ago evaporated into the ether (“It’s like listening to a broken record but the lyrics keep changing,” describes his sardonic son).

It was also one of the most expensive and visually impressive shows on TV in its day, with wildly fantastic cases and a complex history that, like The X-Files, wraps all of the characters up in its web.

Season Two takes fringe science into another dimension, quite literally, and that dimension is fighting back. The first season hinted at larger forces but kept largely to a bizarre-case-of-the-week format. The threads start weaving together this season. Agent Olivia rediscovers her forgotten childhood as an experimental subject and the socially unstable super-genius Dr. Bishop faces the human cost of his past experiments, but the episode that shifts the ground under the show is the story of “Peter,” the parallel universe, and a transgression that is now unraveling emotionally and physically.

There’s also a film noir sci-fi musical episode with cadavers who sit up to sing a song, backstory on Nina Sharp including the event that cost her an arm and an unexpected past with Agent Broyles, and a more active role for Agent Astrid, still playing lab assistant and babysitter to Walter Bishop but now getting out of the lab more often.

Season Three opens with Fringe agent and dimensional traveler Olivia imprisoned in the parallel universe that has declared war on our reality while that dimension’s warped mirror version of Olivia (call her Faux-livia) takes her place in our universe. As she searches for pieces of the doomsday machine under the noses of partner Peter and guilt-ridden, drug-addled genius Walter, our Olivia becomes the test subject of experiments conducted by the far more ruthless and vicious Walternate (John Noble, with his wits very much about him).

For the balance of the season, the show bounces back and forth between the two realities and the lives on each side (and, in some cases, straddling both sides) while the cast has fun playing opposites in a guerrilla war to decide which reality survives. Beyond the simple entertainment value of playing alternate identities, it’s fun to see Olivia loosen up and take a bite out of life. Meanwhile there are the usual fringe science cases, the awkward dance between the professionally distant Olivia and the emotionally fractured Peter and John Noble’s stream-of-consciousness flights of fancy during his journey of redemption.

While that sounds appropriately epic—and it really is this season, with bizarre spectacle to match in the final episodes—it still is the closest show to inhabiting the X-Files zeitgeist of fringe science weirdness, offbeat humor and cosmic conspiracy, while still building the drama on a kind of pulp tragedy and the fatal flaws of its compromised heroes. There are a lot of transgressions to answer for and in many ways they are the very issues that have taken everyone to the brink of annihilation.

Season Four sends the cast of the brainy weird science fiction show into a whole new alternate reality where Walter is a little less stable and Peter never existed, until he pushes his way back in to reality. The war between the dimensions turns into an increasingly cooperative détente as they work together to stop the villain opening the cracks between the worlds, and even the two Olivias end up in a measured truce, both learning a little bit more about themselves through that distorted dimensional looking glass.

The slow romantic waltz between the hopelessly-in-love Peter, who bursts into a world that forgot his existence, and the emotionally closed-off Olivia, who starts to absorb memories from another life, is more than a love-conquers-all storyline. It’s mirrored in love stories and unlikely friendships across dimensions (see Astrid reach out to her OCD counterpart on the other side) and the healing of the damaged, guilt-ridden Walter all over again. But the most fun is had in a flashforward episode to a totalitarian future ruled by a society of Observer overlords who run the Earth like a supernatural mob.

The fifth and final season is a short one of 13 episodes, but that was actually a gift to the creators and fans, not a snub. The show was expensive and never managed to become a mainstream hit, but the fans who liked the show really, really liked it, and that fan loyalty was rewarded with a final short season, giving the creators an opportunity to wrap up the story and give everyone some closure.

Season Five jumps a couple of decades into the future teased in the flashforward episode of Season Four, where the Observers have defied their code of non-intervention and become despots slowly poisoning the atmosphere of Earth. These super-charged visitors from the future are now a repressive ruling class of an authoritarian Earth and the underground rebellion finds the Fringe division preserved in amber (that strange substance from a parallel universe that keeps everything in suspended animation). And who should find them but a resistance leader with a personal connection to them, using her status in the Observer-controlled Fringe Division to fight the power.

The final season is filled with just as many strange inventions and fringe science concepts as ever, but there’s less humor and, oddly enough, a more linear through-line: the team have to recover a series of videotapes and go on a scavenger hunt of sorts to find the pieces necessary to execute the plan Walter concocted before losing his memory.

Meanwhile, it brings back many of the regular and recurring characters from previous seasons, including older versions of Philip Broyles and Nina Sharp, both roused to join the resistance now that the old team is back, and the original rogue Observer September (Michael Cerveris), now reduced to mortal form for his collaboration with the humans.

There’s a sense that the show has kind of lost itself in high-concept detours and this future war just doesn’t offer as much creative opportunity as the dimension-hopping and warped-mirror doubles of previous seasons. But the characters hold it together and the crazy science keeps it interesting, and the creators remember that it’s the humanity—and the regret and redemption seen throughout the show—that kept the fans coming back.

Mark Valley costars in the first season as Olivia’s first partner, Kirk Acevedo is a senior agent with the Fringe division, Seth Gabel is introduced in the second season as an FBI agent whose curiosity leads him to the Fringe division where he becomes a central player in the story, and Leonard Nimoy is Dr. William Bell, Walter’s former partner and the founder of Massive Dynamics.

Add to My List on HBO Max or to My Watchlist on IMDbTV (free with ads).

The Blu-ray and DVD releases features commentary on multiple episodes, featurettes, deleted scenes, and other supplements.