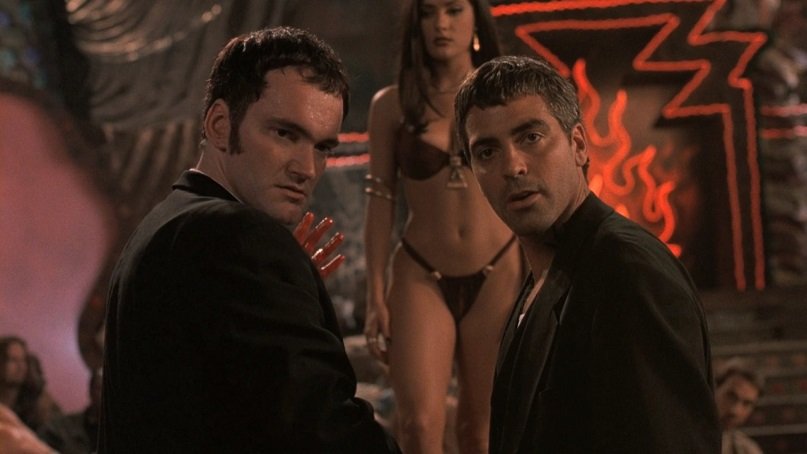 Quentin Tarantino’s work-for-hire rewrite of a B-movie script became an instant cult item when Robert Rodriguez took the reins of From Dusk Till Dawn (1996, R), a gory south-of-the-border horror tale with a spaghetti western flourish. George Clooney headlines the picture as a charming and deadly bank robber who, along with his a psycho brother (Tarantino, overacting as usual), goes on the run with a camper full of hostages (single dad Harvey Keitel and his kids Juliette Lewis and Ernest Liu) to cross into Mexico.

It’s two films in one: a ruthless crime picture out of the Tarantino playbook that takes a detour to a Mexican brothel that turns out to be a nest of bloodsuckers, joined in the middle with an abrupt transition that would be surprising if we weren’t all expecting it. Tom Savini and Fred Williamson co-star as fellow civilians in the bloodsucker battle, Salma Hayak is a stripper who dances with a boa constrictor, and Cheech Marin, Danny Trejo, and Michael Parks co-star.

, iTunes, GooglePlay and/or other services. Availability may vary by service.
From Dusk Till Dawn [Blu-ray+Digital]

From Dusk Till Dawn [Blu-ray]

From Dusk Till Dawn [DVD + Digital]