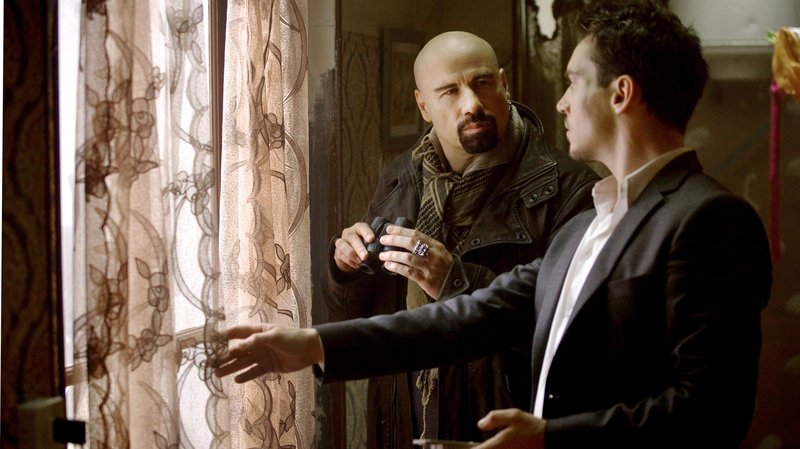 From Paris With Love (2009), starring John Travolta as a cowboy of an American agent and Jonathan Rhys Meyers as an ambitious but untrained low-level agent assigned to assist, is another of Luc Besson’s English language Euro-action films, the contemporary equivalent to the drive-in action movie of decades past. Besson has perfected the formula in a string of unpretentious but adrenaline-boosted movies like The Transporter, Taken, and Columbiana: American/British stars in an otherwise French production, a simple narrative without subplots or distractions, launched into with very little preamble and then carried on without taking a breath until you arrive at the end of the ride. This is simply another variation.

In this one, Rhys Meyers is James Reece, an ambitious young CIA agent whose cover is top aide to the American Ambassador in Paris, but he wants to do more than just plant bugs in political offices. He gets his chance when he’s assigned to drive American agent Charlie Wax (Travolta, head shaved and attitude cranked up to insufferable insolence), the runaway Brahma bull of the agency. His unorthodox methods and brazen approach utterly flummoxes Reece, whose organizational skill and tactical smarts (hey, the guy plays chess) have been duly established. Where Reece tries to reason his way through, Wax simply reacts.

It’s both a classic the mismatched buddy action movie transplanted to Paris and a French idea of an American action movie abroad. There’s a subtext of American arrogance and recklessness that leaves a trail of destruction and bodies in its wake, but the satirical undercurrent is undercut by the fact that this wild man agent is always right and nary an innocent gets harmed in his seemingly cavalier approach to violence in public spaces (including but not limited to blasts of machine gun fire and unleashed rocket launchers). And finally the simple visceral charge of the action carries the film past all moral quandaries.

Director Pierre Morel keeps the film moving with clean, stylish efficiency and well-modulated momentum, and on a budget that should shame American action movie producers. It’s pure pulp and nobody here pretends it is anything more.

, iTunes, GooglePlay and/or other services. Availability may vary by service.
From Paris with Love [Blu-ray]

From Paris with Love [DVD]

The DVD and Blu-ray editions from Lionsgate feature commentary by Pierre Morel and a 26-minute making-of featurette (both of interest to fans only) and a couple of light featurettes on modern day covert ops. Exclusive to the Blu-ray is a “BonusView” video version of the commentary (which is merely an inset video of the director talking through the film), a couple of interactive time-waters and the usual interactive BD-Live functions, plus a bonus standard definition DVD and a digital copy of the film for portable media players.