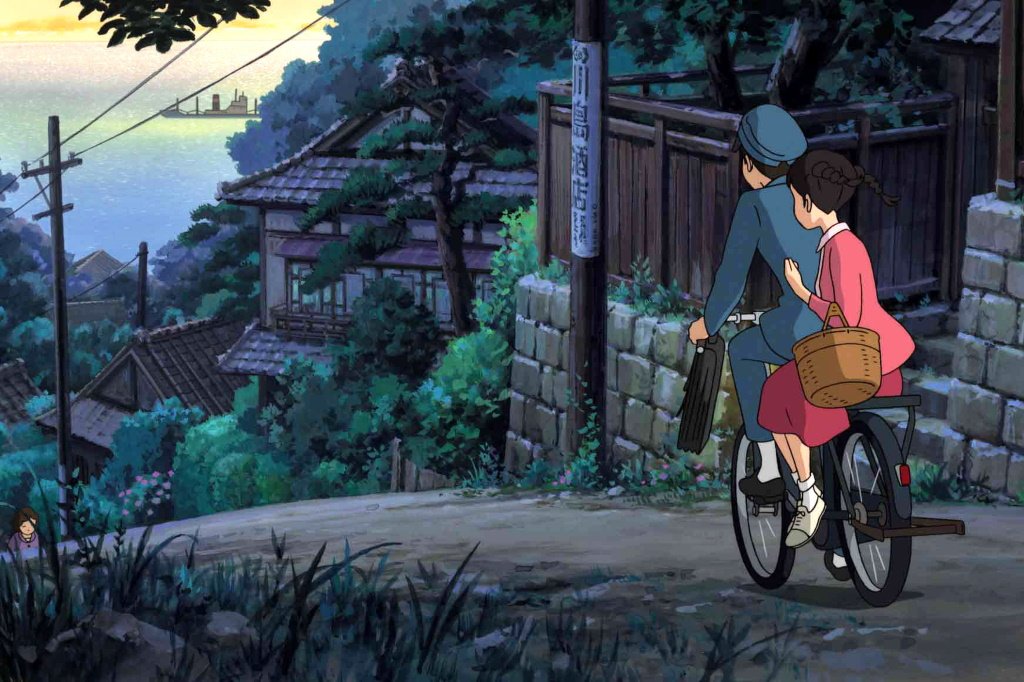 If your idea of Japanese animation is space opera, cyberbpunk action, and Hiyao Miyazaki’s modern fairy tales, then From Up on Poppy Hill (Japan, 2011), might surprise you. Produced and co-scripted by Miyazaki and directed by his son, Goro Miyazaki, this is a gentle, somewhat slight story of student life and young love in early sixties Japan. As the country looks to bury their history and show the world the modern new face of Japan at the 1964 Olympics, these students are determined to hold on to the legacy of the school’s past and they unite in an effort to save the old, neglected clubhouse, affectionately known as “The Latin Quarter,” from demolition.

Nothing like a cause to spark a sweet, utterly chaste high school romance between sunny young Umi, a teenage girl running her family boarding house and looking after her siblings practically alone (dad is dead, a casualty of the Korean War, and mom is studying in America), and student leader Shun, until unexpected complications halt their blossoming relationship.

From Up on Poppy Hill comes from a tradition of Japanese manga focused on the social and emotional lives of kids and teens without the complications of super powers or supernatural legacies, and the animation matches the subject. There’s none of the chaotic comedy or zippy action of Disney or Pixar here, no caricatured figures or exaggerated trials. Instead, the world is pared down to defining details and the direction slowed to appreciate the peace and stillness within the social bustle of everyday life of school and home.

This is the second film by Goro Miyazaki and it’s an enormous evolution from his debut, the inert Tales from Earthsea. You can attribute some of that to his father’s delicate scripting and planning, which leaves much of the emotional drama suggested but unspoken, but Goro weaves it all into a charming and oddly comforting portrait for simpler times. But behind the idealized existence of this picaresque little coastal village is a social culture of absent parents, self-sufficient kids, and adults uncomfortable acknowledging (let alone discussing) the past. No surprise that the film turns to the West for its jabs of nostalgia.

It’s more short story than feature and almost unbelievably optimistic, but it offers a surprising window on a culture and a portrait of high school life far from the anxieties and anger that define so many contemporary films of Japanese youth.

), iTunes, GooglePlay, Fandango, Vudu and/or other services. Availability may vary by service.
From Up on Poppy Hill [Blu-ray + DVD]

From Up on Poppy Hill [DVD]