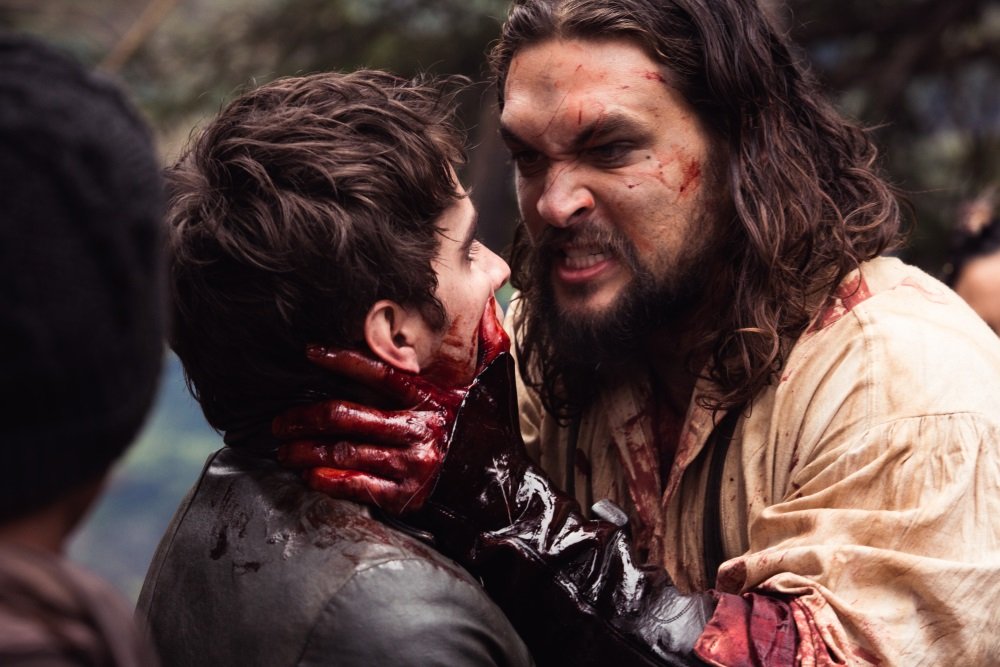 Jason Momoa, still best known as Khal Drago in Game of Thrones but soon to be the big screen Aquaman, stars in Frontier as a trapper battling the British Hudson’s Bay Company monopoly on the 18th century fur trade. His character, Declan Harp, is part-Irish, part-Native American, all furious renegade ready to declare war on the British soldiers and company men (Alun Armstrong plays the head of Hudson’s Bay) attempting to sweep away the competition.

“As with many of these series, lawlessness prevails; violence is frequent and graphic; most of the main characters are male; and too many of the female ones are there only for their cleavage,” writes Neil Genzlinger for The New York Times. “The sexism aside, Frontier is an enjoyable representative of the genre if you can embrace its ambiguity.” And, he continues, it “is refreshingly free of pretension, unlike some in the genre. Yes, there are serious themes to be drawn from it if you’re so inclined — it’s about greed, and empire-building, and exploitation of a land and its native inhabitants — but you can also feel free to take it as simply an action-packed, rather bloody tale from those frothy preindustrial days.”

The co-production between Discovery Channel and Netflix has already played in Canada. It debuts on Netflix today. Six episodes, and a second season has been announced.

Emily Blunt is almost as troubled in The Girl on the Train, a thriller based on the bestselling novel by Paula Hawkins. Haley Bennett, Rebecca Ferguson, Justin Theroux, and Luke Evans co-star and Tate Taylor (The Help) directs (R).

Zach Galifianakis and Isla Fisher have a tough time Keeping Up with the Joneses, aka their glamorous neighbors Jon Hamm and Gal Gadot, in the spy comedy in suburbia (PG-13).

Also new: the horror sequel Ouija: Origin of Evil with Elizabeth Reaser (PG-13), the inspirational drama A Street Cat Named Bob with Luke Treadaway from the best-selling book by James Bowen (not rated), Eadweard with Michael Eklund as photography and cinema pioneer Eadweard Muybridge (not rated), and documentary Huntwatch about the efforts to save the seals from the hunting industry, narrated by Ryan Reynolds (not rated).

Camp X-Ray (2014) stars Kristen Stewart as a soldier at Guantanamo Bay who befriends a prisoner of war (R).

Cult: John Landis’s An American Werewolf in London (1981) mixed humor and horror to a howling success (R). Reviewed on Stream On Demand here.

Foreign affairs: Sonja Braga stars in Aquarius (2016) from Brazil (not rated, with subtitles).

Filmmaker Kristen Johnson transforms twenty years of documentary outtakes into a portrait of privileged moments and brief connections in Cameraperson (2016), a non-fiction scrapbook that reveals (among other things) the powerful connection that documentary filmmakers can have with the people they interview and observe (not

Foreign affairs: the aging impressionist master Renoir (France, 2013) is rejuvenated by a young model that is also romanced by his son Jean (R, with subtitles) and a single mother is haunted in the original Dark Water (Japan, 2002), a horror film with a melancholy heart (not rated, with subtitles).

Streaming TV: Please Like Me: Season 4 continues the popular coming-out comedy from Australia, from Bravo comes the reality show Real Housewives of Potomac: Complete Season 1, and from the Cartoon Network comes the animated Clarence:  Season 2 and Amazing World of Gumball: Season 4.

Jude Law is The Young Pope, the first American pontiff who proceeds to remake the Church according to his own designs, in the strange and surreal HBO original series from Italian filmmaker Paolo Sorrentino. Diane Keaton, Cécile De France, Ludivine Sagnier, and James Cromwell co-star. New episodes arrive every Sunday.

Real Time with Bill Maher returns for 2017, with new episodes live on HBO Friday nights and streaming on HBO Now and HBO GO the next day.

Steven Spielberg’s Bridge of Spies (2015) stars Tom Hanks as a civilian negotiating a prisoner swap with the Soviet Union for captured U-2 pilot Gary Powers (PG-13). Reviewed on Stream On Demand here.

The animated feature Bunyan & Babe, featuring the voices of John Goodman, Kelsey Grammer, Jeff Foxworthy, and Mark Hamill, is free to view and download exclusively from Google Play until February 16.