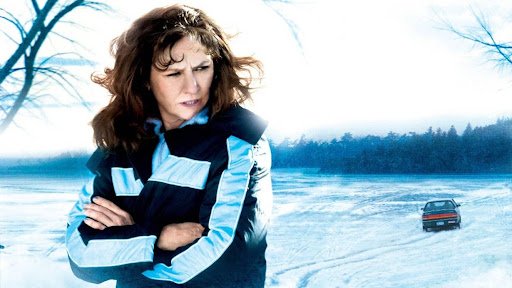 Courtney Hunt delivers the best kind of American independent drama with Frozen River (2008), a film that is respectful of its characters, responsive to its location, and honest in its storytelling. This kind of uncompromising filmmaking is often a hard sell. Hunt not only got her film a theatrical release, she earned Academy Award nominations for her screenplay and for her lead actress, Melissa Leo.

Leo plays Ray, a mother of two in the border town of Massena in upstate New York. Misty Upham is Lila Littlewolf, a widowed Mohawk whose mother-in-law “stole” her newborn son a year ago. Life in this underemployed town is as harsh and barren as the frigid winter landscape. Ray’s gambling-addicted husband left town with the down payment for their new trailer home.

Faced with little opportunity to make ends meet, Ray and Lila embark on an illegal venture transporting immigrants into the U.S. across Mohawk territory and the frozen river of the title. The women are tossed together by necessity and they may not particularly like each other, but they develop an understanding and even a mutual respect.

Hunt’s drama is devastating, not because of the tragic twists, but because of the human reality of poverty and desperation, and the equally human triumph of generosity and sacrifice in the face of it. Set in the rural culture of poverty and bigotry in upstate New York over a bleak winter, the film never cheats the grim reality of their circumstances. Writer/director Courtney Hunt is clear-eyed about the animosity between the Mohawks and the whites and hardships facing them all, which makes the acts of kindness and sacrifice all the more moving and meaningful.

Won the Grand Jury Prize at the Sundance Film Festival and Melissa Leo won a Film Independent Spirit Award along with awards from numerous film critics groups for her performance.

Also on Blu-ray and DVD and on SVOD through Amazon Video, iTunes, GooglePlay, Fandango, Vudu and/or other services. Availability may vary by service.
Frozen River [Blu-ray]
Frozen River [DVD]