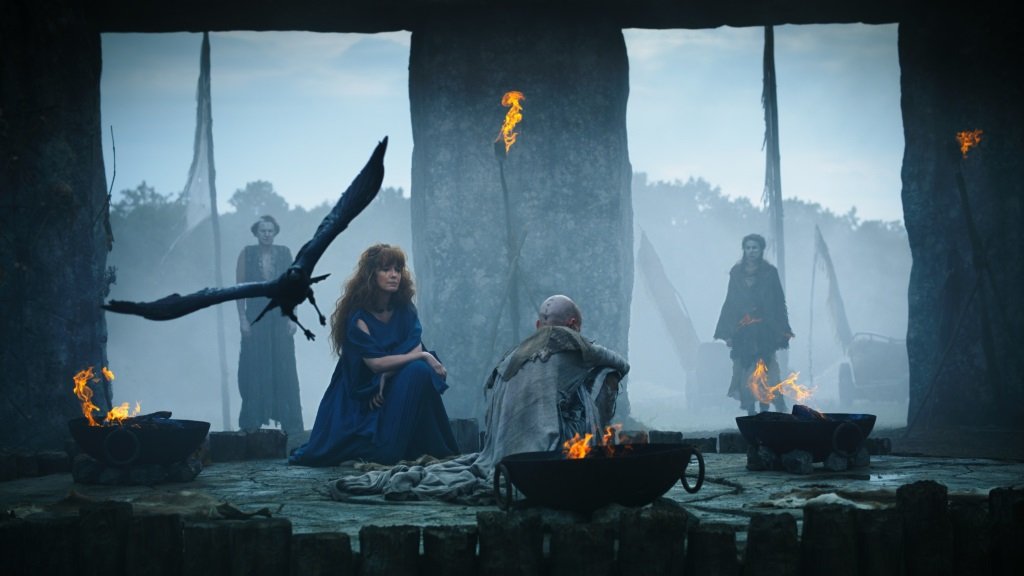 Guardian TV critic Lucy Mangan likes what she sees in the first few episodes: “Swords (Roman); sorcery (druidic); decapitations (two), plus blindings and flayings. Treacheries are uncountable, blood feuds, political manoeuvring, people shouting: “Fetch me my torque!”, wolves (non-dire), burned villages, cauterised limbs, captured peasants and a wandering seer who can sort out any tricky plot points by taking over enemies’ minds and making them spill enemy beans.” Charlotte Higgins (also in The Guardian) is even more ecstatic (“Is Britannia Jez Butterworth’s mad masterpiece?,” she asks), though other reviews are a little more mixed.

It launched on Sky TV in Britain earlier this week and is comes stateside as an Amazon Prime original. Add to your Amazon watchlist.

Will Forte plays Doug Kenney, co-creator of National Lampoon and co-writer of Animal House and Caddyshack, in A Futile and Stupid Gesture (2018, not rated), a comic biopic of the subversive humorist from filmmaker David Wain (Wet Hot American Summer). Kenney launched the careers of a number of comic greats and helped pave the way for Saturday Night Live.

“Wain and screenwriters John Aboud and Michael Colton have decided to make a Doug Kenney movie that Kenney could have written — or at least co-written,” observes David Edelstein in his review for Vulture. “For the most part, they bring that notion off. Working from an evocative biography by Josh Karp, they’ve created an impishly meta cartoon that manages to squeeze in some serious themes — although I’m not sure it leaves you with more than a desire to read (or reread) Kenney’s most famous Lampoon works.”

It debuts on Netflix direct from its world premiere at Sundance 2018. Queue it up!

Pair it with the Netflix documentary Drunk Stoned Brilliant Dead: The Story of the National Lampoon (2015, not rated) for a double feature.

Timothy Olyphant is a U.S. Marshall with a frontier approach to justice in Justified, a crime drama as modern western based on an Elmore Leonard short story that preserves Leonard’s sensibility throughout the show’s six season run as it evolves and expands into a small epic of the crime underworld of Kentucky’s coal country.

It’s an exceedingly smart piece of pulp fiction with the rough edges of fascinating characters and storylines with dramatic blowback. Olyphant’s Raylon Givens may be equal parts pulp cowboy and maverick TV cop, but he’s the real deal with lived in flaws that tell us as much about the past he’s trying to outrun as the man it turned him into, and the measured performance and controlled intensity of Walton Goggins as Boyd Crowder makes him the most dangerous character in a series filled with colorful criminals and cold-blooded killers.

All six seasons and 78 episodes now streaming on Amazon Prime. Add to your watchlist.

Jane (2017, PG) profiles primatologist Jane Goodall and her groundbreaking work studying chimpanzees in Tanzania in the 1960s with rare, never-before-seen film footage of her early expeditions. The film was honored with a number of awards but was surprisingly shut out of the Oscar nominations.

BPM (Beats Per Minute) (France, 2017, not rated, with subtitles), a drama of the lives of ACT UP activists in Paris during the AIDS epidemic early 1990s, is social history with a heartbeat.

Return to the wondrous world of J.R.R. Tolkein in The Lord of the Rings: The Fellowship of the Ring (2001, PG-13), the first film in Peter Jackson’s dazzling fantasy epic.

Foreign affairs: a heartsick man tries to win back his superhero-loving girlfriend in the romantic comedy Blockbuster (France, 2017, not rated, with subtitles).

Streaming TV: the non-fiction series Dirty Money: Season 1 from Oscar-winning filmmaker Alex Gibney digs up the untold stories of scandal and corruption in the world of business. Also new:

Jesse Eisenberg, Dakota Fanning, and Peter Sarsgaard are Oregon eco-terrorists in Night Moves (2013, R), a drama about the collision of social action and personal responsibility.

Oscar-winning actress Brie Larson shines in the tender and touching drama Short Term 12 (2013, R) as a counselor at a facility for homeless teens (reviewed on Stream On Demand here) and Jolene (2008, R), adapted from the E.L. Doctorow short story, presents Jessica Chastain in her film debut.

Classics: Lawrence of Arabia (1962, PG-13) is better served as a big-screen experience but Amazon Prime is now streaming the gorgeous 50th anniversary restoration. Henry Fonda and Katharine Hepburn both won Oscars for On Golden Pond (1982, PG).

Aubrey Plaza is a quirky but troubled stalker in the social media satire Ingrid Goes West (2017, R), a timely comedy about confusing “likes” for human connection. Reviewed on Stream On Demand here.

True stories: School Life (2017, not rated) follows a year in the life of two passionate teachers in an Irish primary boarding school while Barista (2015, not rated) goes behind the scenes at the National Barista Championship.

Amy Schumer and Goldie Hawn are Snatched (2017, R) in the comedy of a South American vacation gone horribly wrong.

Available Saturday night is All Eyez on Me (2017, R) starring Demetrius Shipp Jr. as Tupac Shakur and documentary short The Number on Great-Grandpa’s Arm (2018, not rated).

Jules Dassin, the American filmmaker who fled the Blacklist and reinvented his career in Europe, is FilmStruck’s Director of the Week and their line-up of films includes the documentary-influenced film noir The Naked City (1948), the London-set Night and the City (1950) with Richard Widmark, and the heist classic Rififi (France, 1955, with subtitles).

The films of Vanessa Redgrave also get a spotlight with collection that includes the Oscar-winning A Man for All Seasons (1966, G) with Paul Scofield, David Hare’s Wetherby (1985, R), and James Ivory’s The White Countess (2005, PG-13), where she co-stars with daughter Natasha Richardson and sister Lynn Redgrave.

From New Zealand comes the five-part miniseries Dear Murderer (2017), based on the notorious life and times of the colourful defence attorney Mike Bungay.