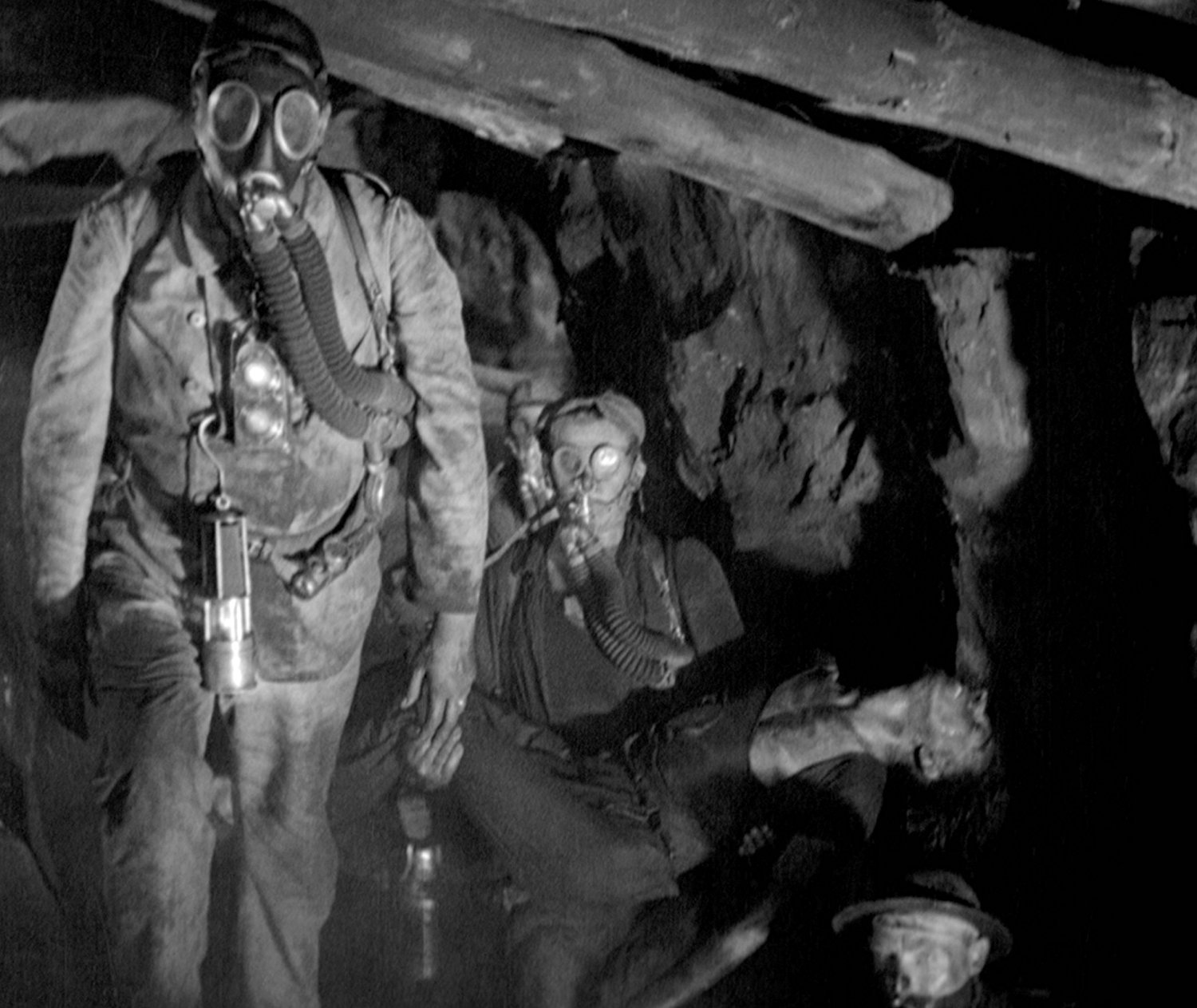 Georg Wilhelm Pabst was not only one of the great German directors of the silent film era, he (along with Fritz Lang) explored the expressive possibilities of sound in the early days of sound cinema. Criterion presents two of his earliest sound features, a pair that make perfect companion pieces: Westfront 1918 (Germany, 1930) and Kameradschaft (Germany, 1931).

He tackled World War I for his debut sound feature Westfront 1918, an anti-war drama about four soldiers in the trenches of the western front in the final months of fighting. In the tradition of the platoon drama, they represent different types—the young Student, the hearty Bavarian, the protective Lieutenant, and the married man Karl (the only one to be called by name)—and have bonded as friends under fire, but the film chronicles the way the war grinds them up and leaves them dead or broken. It’s adapted from the novel “Four Infantryman on the Western Front” by Ernst Johannsen and looks as if it could be Germany’s answer to the much more expensive and expansive Hollywood production All Quiet on the Western Front from Lewis Milestone, based on another novel by a German author. In fact they were in production at the same time and released just a month apart.

Pabst’s film is much more intimate and focused on the experience of the men ground up in combat. It opens on a brief respite in a French farmhouse where the Germans joke and drink with their French hosts (there’s even a love affair blossoming between the student and the farmer’s daughter Yvette) before being called back up to the trenches. Ostensibly the Germans are occupiers but we don’t get a sense of enemies here so much as a respectful co-existence in an impossible situation. There’s no talk of politics and no flashbacks to life before war, and they don’t bemoan their plight. They just do their best to survive, especially when the shelling comes from their own misplaced artillery. And it isn’t much better on the homefront. When Karl goes home on leave he finds a population so starved from food shortages that civilians envy the soldiers, and a culture that drives people to desperate measures to survive. When he returns he’s haunted by the cries of a man trapped in the blighted, bombed-out no man’s land of mud and barbed war between the two armies. “Look out for your own hide,” is the advice his Bavarian brother soldier gives him.

Unlike most early sound films, Pabst’s camera is mobile, full of long tracking shots along the trenches and traveling with the soldiers as they advance. He also uses sound for both realistic and expressionistic effect, with the echo of artillery a near-constant soundtrack that begins in the easy levity of the opening scene and barely ceases before ending in a makeshift hospital behind the lines, the camera tracking across the dead, the dying, and the shell-shocked survivors.

Criterion presents the 2014 digital restoration of the film by Deutsche Kinematek, built largely from a 35mm duplicate positive held at BFI with missing footage taken from a dupe negative. There is visible damage in some scenes but the contrasts are strong and the image sharp and largely clean and the soundtrack free of undo hiss and noise.

In German and French with English subtitles.

On special edition DVD and Blu-ray from Criterion, in German with English subtitles, with “Le Dossier de l’ecrain” (France, 1969), a 71-minute TV program discussing World War I with battle veterans, originally broadcast in conjunction with a showing of “Westfront 1918” (in French with subtitles), a video interview with film historian and Pabst expert Jan-Christopher Horak (17:54), a brief (2:51) audio interview with Jean Oser, the editor of Westfront 1918, recorded in 1988, and a “Restoration Demonstration” (8:44) that is actually a featurette that chronicles the 2014 restoration. The accompanying booklet features an essay by Luc Sante.
Westfront 1918 (The Criterion Collection) [Blu-ray]

Inspired by a true story, Kameradschaft—the third sound film from filmmaker G.W. Pabst—is inspired by a real-life mining disaster in France near the border with Belgium where a team of German rescue workers crossed the border to help the French. Pabst moves the setting to the French-German border in 1931 and a vast coal mine that crosses through both countries.

It’s ten years after the war and lingering tensions are only exacerbated by the depression, which has them competing for limited positions on both sides of the border. There’s plenty of coal but no one is buying; unemployed German miners shuffle past mountains of it after being turned back at the French border. But when a fire on the French side causes an explosion that traps the French workers, a German rescue worker pulls together a crew and crosses the border to join the rescue. While the rescue team leader Wittkopp (Ernst Busch) takes his team down the elevate shaft with their modern equipment, a trio of miners deep below on the German side decide to go in from below, which means breaking through the fire walls and the gate that marks the border hundreds of feet underground and divides the mine between the two countries. Below as above, national borders are ignored in crisis. At least by the miners.

Kameradschaft makes a great companion piece to Westfront 1918, another ensemble piece set on the border of Germany and France, picking up the tale of two countries more than a decade after the war and making the case for putting the past behind. The title translates to “comradeship” and indeed worker solidarity trumps national division, even if the characters can’t always communicate with each other. Pabst has the Germans speak German and the French speak French, more often than not unable to communicate through conversation yet able to make themselves understood in the crisis of rescue and in the celebration in the aftermath. (My one criticism of the Criterion disc is that it falls to differentiate the languages in the subtitles through color or format changes; you need to listen to the speakers to figure out which language us being spoken.)

It is also a dramatic, fast-moving rescue drama with impressive mine scenes (all created in the studio), dynamic disaster scenes, and striking special effects. As the miners flee the collapse, the camera backtracks through the tunnels in a rush to record the panic of the workers as fire and smoke roars behind them. It’s brilliant. Pabst enhances the tight, hemmed-in scenes of the mines with the open skies above, and the worker’s locker room and shower room on the German side is a veritable warehouse, exaggerated the sense of space they must feel after leaving the underground. And he marshals a dramatic soundtrack with an effective use of silence and the pings of pipes struck by trapped miners.

Westfront 1918 is a downbeat film filled with scenes of death and loss and a powerful anti-war statement with no glory or triumph. Kameradschaft is a thriller with a sense of hope through international cooperation and worker solidarity. The Socialist message, however, did not find an audience in the turmoil of 1931 Germany and the film simply tends to be overlooked in an accounting of early thirties Germany cinema. The Blu-ray and DVD debut from Criterion hopefully will help correct that.

The film was originally released in two slightly different versions created for German and French audiences. Criterion presents the 2014 digital restoration of the German version by Deutsche Kinematek, built largely from a 35mm duplicate positive held at BFI with the ending taken from the 35mm nitrate camera negative of the French version at CNC. The image quality is similar to Westfront but, to my eyes, a little stronger. Much of the film takes place in the mines with lights cutting through the darkness, and the contrast of light and dark is superb in this restoration. Some minor visible damage in some scenes but the image is sharp and largely clean and the soundtrack free of undo hiss and noise.

In German and French with English subtitles.

On special edition DVD and Blu-ray from Criterion, in German with English subtitles, with the half-hour interview featurette “All as One: Hermann Barth on Kameradschaft” on the film’s production history (in German with English subtitles), an interview with the film scholar and Pabst expert on the film Jan-Christopher Horak (14:48), and audio-only interview with Jean Oser, the editor of Kameradschaft, recorded in 1988 (set to footage from the French version. The accompanying booklet features an essay by Luc Sante.
Kameradschaft (The Criterion Collection) [Blu-ray]

Both films are presented in the 1.19:1 aspect ratio of the early sound films; it looks even more square than traditional Academy ratio films.

Hermann Barth on KAMERADSCHAFT from Criterion Collection on Vimeo.