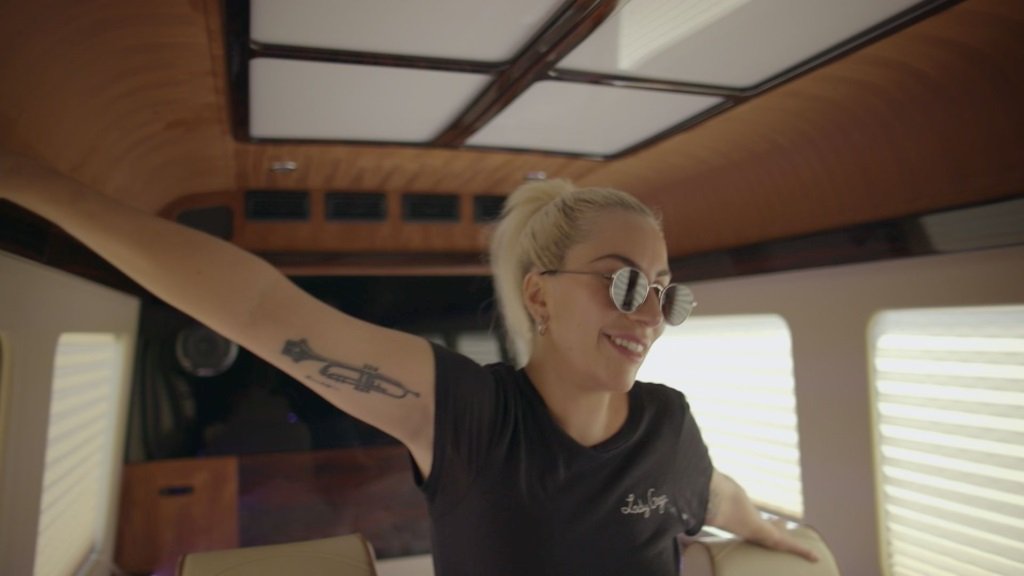 The documentary Gaga: Five Foot Two (2016, not rated) goes behind the scenes for a candid look at Lady Gaga’s life during an eight-month period where she records a new album, performs at the Super Bowl, and acts in American Horror Story.

It “manages to create a sense of intimacy and revelation, even as we sense that there is really no such thing as an unguarded moment for Lady Gaga,” writes Peter Sobczynski for Rogerebert.com. “(W)hat makes this documentary work is the inspiring and engaging presence of Gaga herself. Yes, there is never a moment when she is not acutely aware that she is on camera but at the same time, she still manages to radiate a simple and genuine sense of decency and humanity that makes her eminently relatable.

Comes to Netflix after debuting at the Toronto International Film Festival. Queue it up!

Just in time for the revival, Hulu now offers the entire eight-season run of the original Will & Grace, the Emmy-winning sitcom with Eric McCormack and Debra Messing that found high ratings and endured criticism for featuring gay characters in leading roles. It wasn’t the first to do so but it was the first success and it has been credited with helping mainstream America accept homosexuality as a normal part of American culture.

198 episodes now ready to stream. Watch it now on Hulu.

Gal Gadot is Wonder Woman (2017, PG-13), the original big screen super heroine, in the superhero hit of 2017. This one is set during World War I where Gadot’s Amazon warrior takes on the God of War to save the world with the help of American soldier Steve Trevor (Chris Pine). Also on DVD and Blu-ray. Reviewed on Stream On Demand here.

Kumail Nanjiani and Zoe Kazan star in The Big Sick (2017, R), the hit indie comedy by Nanjiani and his wife Emily V. Gordon based on their strange, true, and dramatic story of their courtship. Also on DVD and Blu-ray and at Redbox.

Also new: indie comedy The Little Hours (2017, R) with Alison Brie, Aubrey Plaza, and Dave Franco, based on the medieval stories of Giovanni Boccaccio, and drama The Hero (2017, R) starring Sam Elliott as an aging, ailing movie star. Both also on DVD and Blu-ray.

Emma Watson and Dan Stevens are Beauty and the Beast (2017, PG) in Disney’s lavish live-action remake of their animated musical from filmmaker Bill Condon, no stranger to musicals (he adapted Chicago and directed Dreamgirls) or to big-budget fantasy spectacle (the final films in the Twilight saga).

Todd Haynes directs Carol (2015, R), a love story between a society woman (Cate Blanchett) separated from her husband and a department store shopgirl and budding photographer (Rooney Mara) in 1950s New York City. It was nominated for six Academy Awards, including acting nods for Blanchett and Mara, and it is a lovely evocation of the time and place and social fabric.

Juliette Binoche and Fabrice Luchini star in Slack Bay (France, 2016, not rated, with subtitles), a surreal comedy from Bruno Dumont.

Stand-up: Jerry Before Seinfeld presents the comedian performing at The Comic Strip in New York City, the club where he began.

Rachel McAdams and Noomi Rapace star in Brian De Palma’s sexy European thriller Passion (2012, R), which doesn’t have a lot of passion but does engage in a love of kinkiness, flirtation, sensation, and the thrill of playing big business games.

Dan Stevens stars in the science fiction thriller Kill Switch (2017, R) and We Are What We Are (2014, R) is a family drama in the form of an indie horror film.

Classics: William Powell and Carole Lombard star in the sparkling screwball comedy My Man Godfrey (1936). There are plenty of poor editions out there but Amazon is streaming the excellent studio print.

They also have a good edition of Orson Welles’s Mr. Arkadin (1955), which runs 106 minutes and appears to be the “Comprehensive version” created from the existing materials for the Criterion DVD release in 2006. Again, it looks quite good and it comes for Filmorsa.

Cult: Slumber Party Massacre (1982, R) may not be great but it is the first slasher film to inject a feminist perspective, thanks to director Amy Holden Jones and screenwriter Rita Mae Brown.

Michael Keaton directs and stars in The Merry Gentleman (2016, R) as a suicidal hitman who befriends a young woman (Kelly Macdonald) fleeing an abusive relationship (Amazon Prime and Hulu).

The title speaks for itself in the comedy Tyler Perry’s Madea Goes to Jail (2009, PG-13) (Amazon Prime and Hulu).

Michelle Dockery leaves Downton Abbey far behind to play a con artist in the TNT crime thriller Good Behavior: Complete Season 1, where her behavior is anything but good.

Thomas Vinterberg draws on his own life for The Commune (Denmark, 2016, not rated, with subtitles), the story of an experiment in communal living in 1970s Denmark.

The entire debut season of big Emmy winner The Handmaid’s Tale is available to stream.

The second and final season of the dark comedy Vice Principals with Danny McBride and Walton Goggins is now underway.

HBO won big at the Emmys for Big Little Lies, Veep, and The Night Of, all available on HBO Now and HBO On Demand.

Director of the week Jean-Luc Godard is celebrated at FilmStruck with 18 features, short films, and documentaries, from his innovative feature debut Breathless (France, 1960) through Weekend (France, 1967), his blast across the bow of a consumer culture eating itself alive, to Film Socialisme (France, 2010), all unrated and with subtitles.

19-2: Season 4 – Acorn presents the American debut of the final season of the award-winning police drama about uniformed officers on the streets of Montreal.