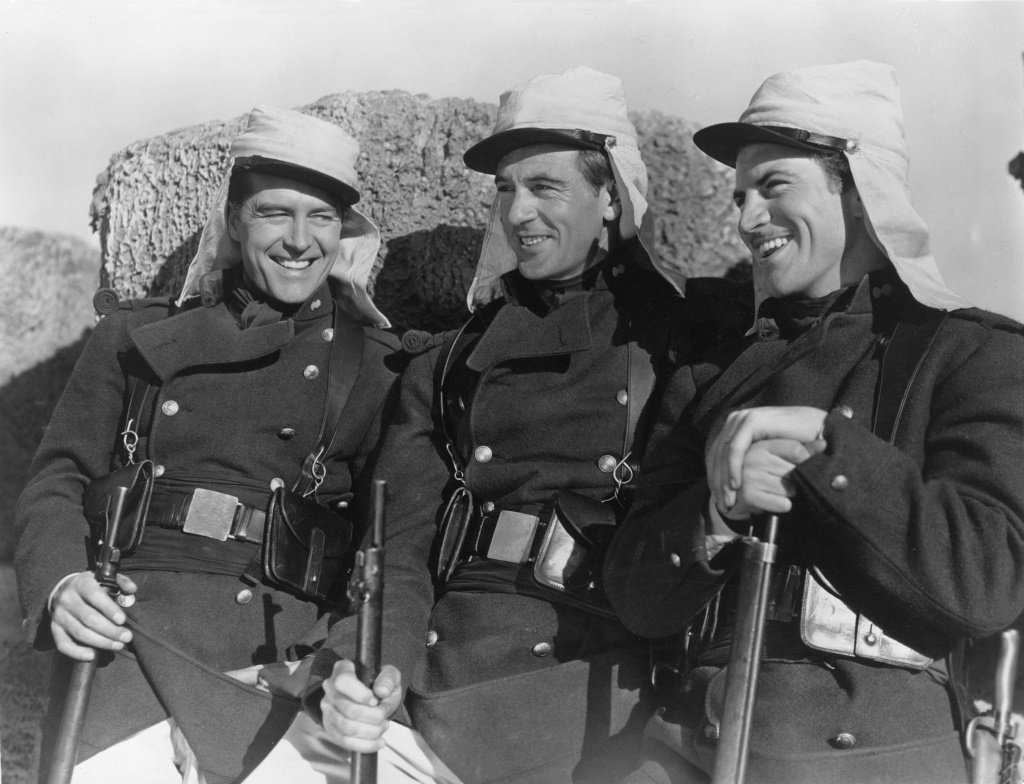 Gary Cooper, Ray Milland and Robert Preston are the boisterous Geste brothers, orphans raised by a society lady as gentlemen with a sense of playful camaraderie and undaunted chivalry. Their sense of honor and sacrifice inspires all three of them take the blame for a jewel theft and run off to join the French Foreign Legion, which they do so in order of age (Coop as the eldest, Preston as his partner in trouble and Milland as the loyal little brother in love with their adopted Auntie’s lovely female war orphan, Susan Hayward). Together they square off against a brutal sergeant (Brian Donlevy).

The story is irresistible from the prologue, where a squad of legionnaires arrives at an isolated outpost to find a mystery – a deserted desert fort filled by dead men slumped at their posts, a disappearing scout, a confession and a sudden fire that engulfs the haunted fort – that hangs over the adventure like a dark shadow of doom. The action set piece, an attack on the fortress by an Arab army, is a magnificent reworking of the frontier movie Indian attack of a cavalry fort dropped into in a North African setting. The characters are hearty creations and the muscular direction by William Wellman keeps the film briskly moving along.

This is a great romantic adventure of hard men, loyal comrades and the fraternal love and sacrifice of brother who risk everything to protect each other and it’s one more exhibit in the case for William Wellman as the most underrated director of the thirties.

It was nominated for two Academy Awards, including a nod for supporting actor Brian Donlevy.

Also on Blu-ray and DVD and on SVOD through Amazon Video, iTunes, GooglePlay, Fandango, Vudu and/or other services. Availability may vary by service.
Beau Geste (1939) [Blu-ray]