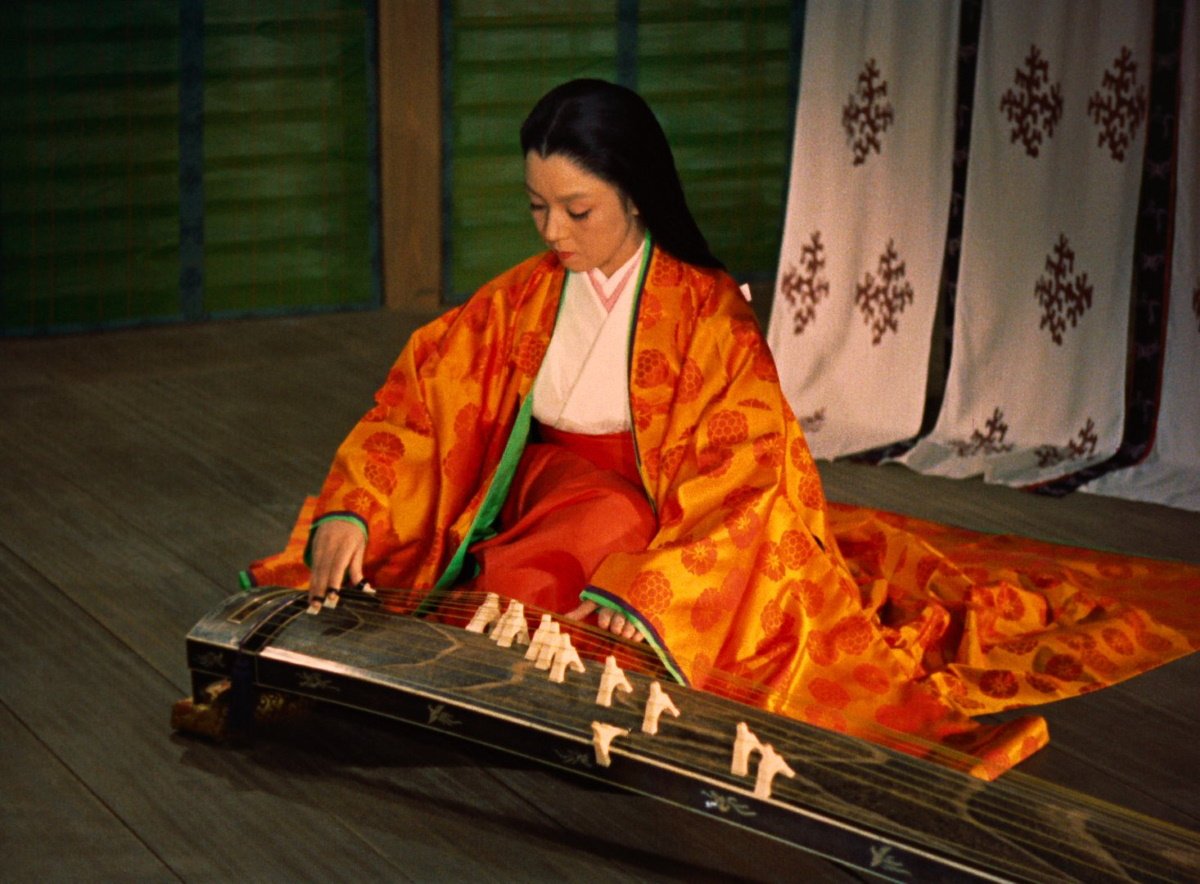 Gate of Hell (Japan, 1953), aka Jigokumen, was one of the very first color films made in Japan, and the first color Japanese film to be seen in the west.

Kazuo Hasegawa stars as the loyal Morito, a samurai warrior who refuses to abandon his emperor when rebels storm the imperial residence and appear poised for victory, and he falls for the beautiful Kesa (Machiko Kyô, also star of Rashomon and Ugetsu), lady in waiting to the empress who risks her own life to give cover to the royal couple. It seems a perfect match, but Lady Kesa is already married and happily so, and the tensions between the imperial lords and the warrior class increase as Morito pushes his demands for her hand against all standards of decorum and respect. He becomes obsessed and mad with passion to the point that he abandons all of his virtues and honor.

Director Teinosuke Kinugasa is not exactly a household name in the west but he was a Japanese pioneer whose legacy reaches back to the silent days. His remarkable avant-garde drama A Page of Madness is one of the great expressionist films of the silent movie era. Gate of Hell is a far more dramatically subdued film but it too turns on love and madness, though of a different sort.

Kinugasa opens the film in a riot of color as the emperor’s staff runs in panic under attack from the rival clan and the warriors furiously try to defend the palace. It’s not a battle scene so much as an expression of chaos, like a painting in motion, and Kinugasa sets the scene by unfurling a long scroll of an action painting of the battle.

In the aftermath of the battle, the rest of the film is more intimate, with handsome, formal shots strained by Morito’s coiled emotions and defiant behavior, contrasted with the gentle, thoughtful nature of Kesa’s honorable husband (Isao Yamagata). Kinugasa’s direction is far more muted than Kurosawa’s Rashomon or Seven Samurai, but his use of color is striking and dramatic, creating tensions within the shots, modulating the mood, and punctuating the action.

It won the Grand Prix at Cannes (the first Japanese film to receive the award) and a special Academy Award for best foreign language film. The award-winning samurai tragedy helped introduce the world to Japanese cinema in the 1950s.

The film was shot in Eastmancolor, a much less stable color process than Technicolor, and over the years the film faded, losing the dynamism of Kinugasa’s design. It was only recently restored, using original separation masters and other archival materials, to return the film to its bright, vibrant original look. Criterion’s digital master was created from this 2011 2K restoration.

In Japanese with English subtitles

Also on Blu-ray and DVD and on SVOD through Amazon Video, iTunes, GooglePlay, Vudu and/or other services. Availability may vary by service.
Gate of Hell [Blu-ray]
Gate of Hell [DVD]

The DVD and Blu-ray editions have no supplements beyond a fold-out insert with an essay by film historian Stephen Prince.