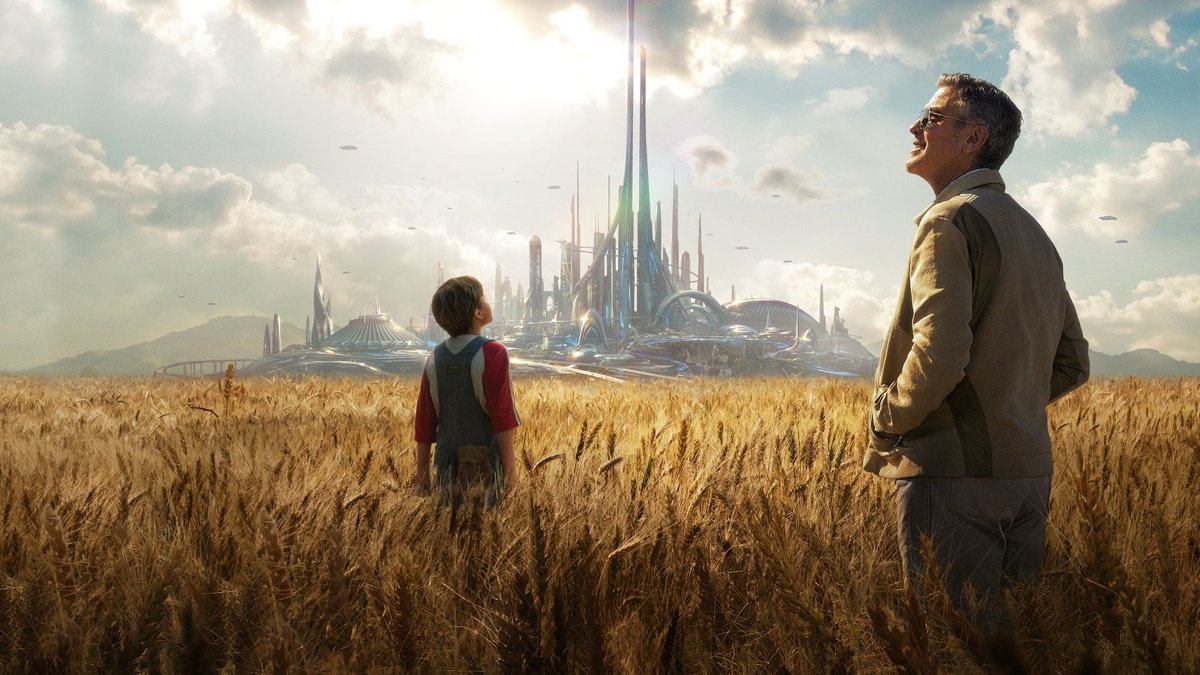 Tomorrowland (2015), yet another feature film based on (sort of) a Disneyland attraction, is science fiction with heavy helpings of steampunk and retro-futurism.

This is a film that visualizes the future with the idealism born of sixties hope, art deco lines, and skylines out of cover art from “Amazing Stories.” It’s the future as dreamed up by kids inspired by the 1964 World’s Fair, and then trashed by the cynicism and hopelessness of a culture where science is ignored as the population races to destroy their world.

That’s the film at its best, a triumph of imagination in an otherwise confused adventure involving time travel, a reclusive inventor, and killer robots from the future.

Britt Robertson is Casey, a plucky but somewhat destructive teenager who still dreams of a future where great things are done and is rewarded with a “Tomorrowland” button, gives her a front row seat to the future. George Clooney is the former wonder boy turned bitter recluse, hiding out from the world while cobbling together inventions with a decidedly defensive purpose. They get a workout when the two of them flee an army of android assassins and head back to the future, where Hugh Laurie stands in as the film’s bad guy.

It should much more fun than it is. Clooney, who can usually sustain a film with seemingly no effort, isn’t as much fun when he’s grumbling and griping. Robertson’s Casey keeps stopping to gawk and tell us how cool all this is so often we don’t get to enjoy the invention on our own. And while the idea that the inventors and the artists and the dreams can save the world is fine, the film has a very vague idea about how that actually works.

But finally, it just doesn’t inspire or engage. There’s plenty of creative energy propping up a soggy story with a hollow sense of hope and a troubling sense of exceptionalism that seems rather randomly applied. All you gotta do, I guess, is sabotage a NASA demolition sight to get in the club.

Also on Blu-ray and DVD and on SVOD through Amazon Video, iTunes, GooglePlay, Vudu and/or other services. Availability may vary by service.
Tomorrowland [Blu-ray]
Tomorrowland [DVD]

On Blu-ray and DVD, with a production diary featurettes and a mock commercial. The Blu-ray also includes three featurettes, Brad Bird production diaries, an animated short, and deletes scenes, plus bonus DVD and UltraViolet Digital HD copies of the film.