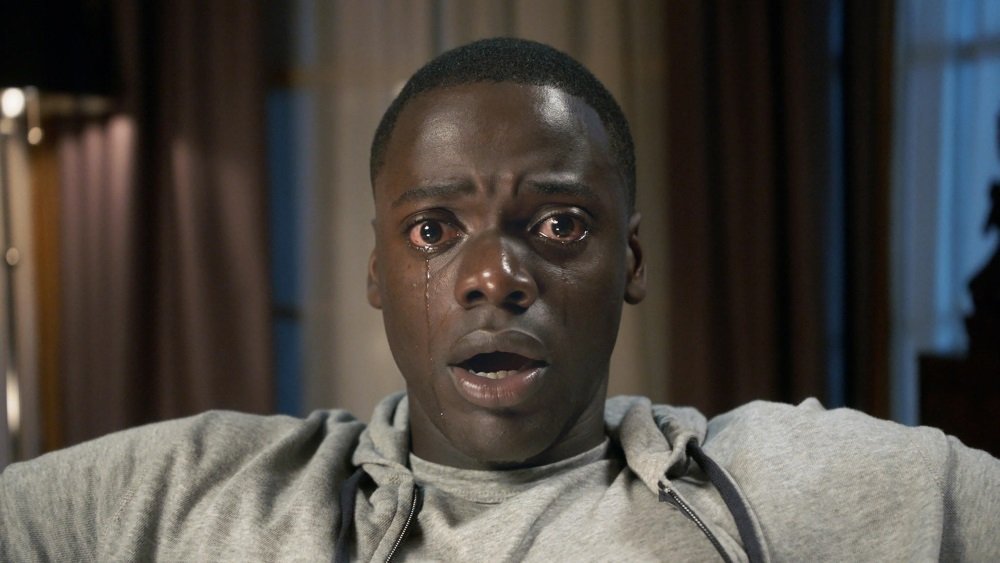 The Stepford Wives meets Guess Who’s Coming to Dinner in Get Out (2017), the directorial debut of writer / comedian Jordan Peele, a tricky and successful mix of social satire, modern horror, and savvy commentary on race as experienced by a person of color in a largely white society.

Daniel Kaluuya stars as Chris Washington, a photographer with a promising career and a gorgeous, supportive girlfriend, Rose (Allison Williams), and after months of dating, he’s finally meeting the parents for a weekend stay. Her parents are white, liberal, and affluent, and on the drive over he finds out that she hasn’t told them that he’s black, which makes him a little uneasy. No worries, they are warm and welcoming, perhaps a little too overeager to make him welcome. Dad (Bradley Whitford) is a chatty hugger who launches into his spiel of how he would have eagerly voted Obama in for a third term. Mom (Catherine Keener) is a therapist who seems to be sizing up all those suppressed feelings, a suburban Earth Mother who seems just a little too eager to hypnotize him. They make a point of just how much they don’t see color, which of course only accentuates how much he stands out in this upstate social pocket where the only other black faces are groundskeeper Walter (Marcus Henderson) and housekeeper Georgina (Betty Gabriel). They have been with the family so long they have become part of the family, explains Mom. Just maybe not quite in the way you assume.

Peele has written sketch comedy and he co-wrote the screenplay for Keanu but this is his debut as a director and he takes the reigns like a veteran. He takes a page out of John Carpenter’s playbook, using widescreen to create compositions just slightly off-balance and to sneak details into the frame: the true horror not off-screen but hiding in plain sight. There are playful scares and startles through the first half that shake us up and then let us shake it off with a nervous laugh. Then things get weirder, and meaner, and finally downright mercenary without losing the satire or the commentary.

The performances are pitch perfect, capturing that sense of performance that we undertake when trying to make a good impression on a first meeting, then introducing an uneasy edge to everything. Dinner is thrown off by Rose’s aggressive brother (Caleb Landry Jones). Georgina seems a little spaced out, constantly staring into the mirror like she’s drifting back to some distant youth, and Walter is simply odd. It’s not just that they don’t act like “black folks,” their diction and grammar is feels archaic, like they’ve dropped in from old movie. Is it because we’re seeing it all through the eyes of Chris or is there something truly weird bubbling under this surface of exuberant not-quite-normalcy?

It’s both, which is Peele’s point, or rather one of his points. Get Out is a nightmarish satire of white privilege at its most absurd extreme. The big party feels more like a market than a social event and the auction, a silent spectacle run through with signals out of a secret society, downright unnerving. We get hints of some kind of modern slavery at work and then Peele upends our assumptions, all with savvy and satisfying misdirection of expectations and a constant weave of dark comedy and offbeat humor. Along the way, Peele tries to give audiences a sense of what it feels like to be black man in white society tripping over itself to display its liberal acceptance, all too aware of every racially-tinged comment. Are we just imaging things, being paranoid, or is there something under that awkward comment? Get Out reminds us that for a “post-racial” society, we still haven’t gotten past race.

, iTunes, GooglePlay and/or other services. Availability may vary by service.
Get Out [Blu-ray]

The Blu-ray and DVD release features commentary by filmmaker Jordan Peele, an alternate ending and 23 minutes of deleted and alternate scenes with commentary by Peele, the featurette “Unveiling the Horror of Get Out” (8 mins) and a Q&A with Peel and the cast conducted by Chance the Rapper. The Blu-ray includes bonus DVD and Digital HD copies of the film.