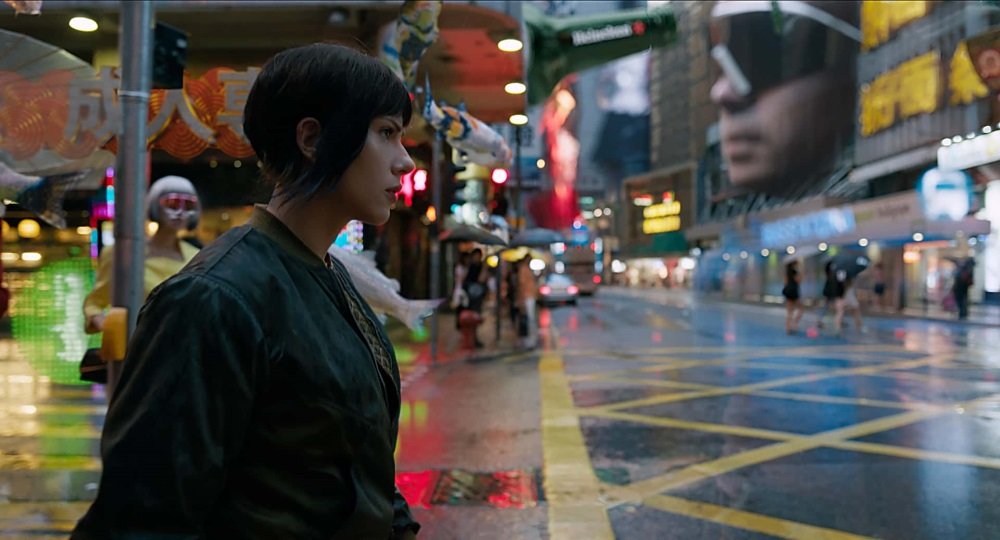 The live-action Ghost in the Shell (2017) is both a big-screen adaptation of the long-running Japanese manga (comic book) by Shirow Masume and a remake of the landmark animated 1995 feature from Mamoru Oshii. No matter how you split the difference, the film had a high bar to clear even before the controversy over the casting of Scarlett Johansson as Major Motoko Kusanagi, who is simply Major in this adaptation. A veritable weapon—her body is almost entirely artificial, a sophisticated cyborg with a human brain who isn’t sure where the person ends and the technology begins—Major is the leader of the Section 9 strike team, an anti-terrorist division of the government that, at times, battles rival sections as well as external threats. Their biggest nemesis, however, is a cybercriminal named Kuze (Michael Pitt) who hacks into human minds and turns ordinary people into terrorist weapons.

Johansson is remarkably effective in the role, impassive but not blank, both physically fierce and ethereal, morphing in action as the technology flickers into chameleon mode or sends her senses into 360 degree awareness. She is graceful and powerful, still and sudden, woman and machine, and her sense of identity is wrapped up in this alien physicality. Her relationship with Dr. Ouelet (Juliette Binoche), the scientist who created her cybernetic shell and ostensibly saved her life after a terrorist bombing, is somewhere between filial respect and professional collaboration, and for all the maternal care that Ouelet tries to push down, there’s something else creating the emotional distance between them. Major is most at ease with Batou (Pilou Asbæk), her trusted and fiercely loyal number two, and she is completely loyal to their section head Aramaki (‘Beat’ Takeshi Kitano), whose impassive expressions (Takeshi’s eternal hint of a smile makes him all the more enigmatic) covers his protective nature. As she has no memory of her past before the accident, they are the closest thing she has to family. At least until Kuze starts dropping hints about her origins and questions the identity she has taken for granted since her cybernetic rebirth.

Director Rupert Sanders sets it all in a dazzling Pan-Asian city of the future, an urban landscape equal parts Blade Runner and manga fantasy realized with state-of-the-art CGI. The world looks digitally painted and it is something to behold, but that artificiality, the layering of digital elements through the physical world, also provides an appropriate backdrop to a story of alienation and identity. This is such a visually overwhelming, overstimulated landscape that humanity is in danger of being swallowed up in the fantasy created by 3D advertising that hovers and swims out of billboards and into the urban sky. The story can be confusing and the script doesn’t help clear things up, but that’s less important than the culture surround the characters and their relationship to it, to one another, and to their own bodies, which are (at least to some extent) technological additions to the flesh.

As the original name indicates, Major was conceived as a Japanese character and Johansson is most certainly not Asian. The film was accused of whitewashing—casting a white actor in an Asian role—and it’s a fair point. There are precious few major film roles for actors of Asian ancestry and every one cast with a Caucasian performer reduces the opportunities for actors of color (the sad fact is that any character not specified by cultural identity is generally assumed to be white by default in casting). Yet Johansson bears a remarkable resemblance to the original animated incarnation, which in the anime tradition looks European to western audiences but is identified as Asian by eastern audiences, and the context of the film she proves to be inspired casting for the theme that emerges over the course of Major’s journey to discover who she was and who she is now.

Watch it on Showtime

The Blu-ray edition looks stunning (I did not view the DVD, which features no supplements) and includes the 30-minute making-of documentary “Hard-Wires Humanity: Making Ghost in the Shell,” which covers the production with lots of behind-the-scenes footage, and the shorter featurettes “Section 9: Cyber Defenders” (11 mins) and “Man & Machine: The Ghost Philosophy” (10 mins), plus bonus DVD and Ultraviolet Digital HD copies of the film.