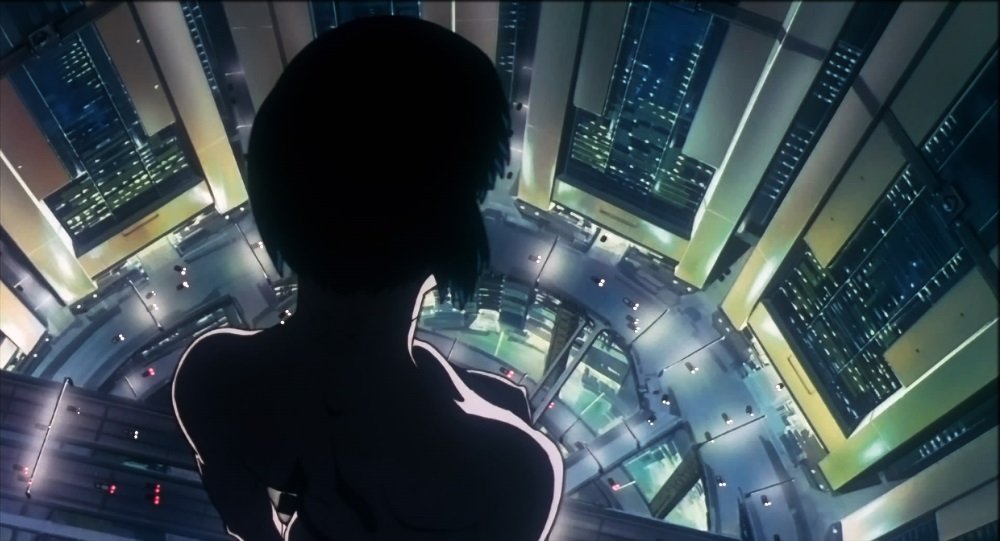 Ghost in the Shell (Japan, 1995) (Anchor Bay, Blu-ray Steelbook) – Mamoru Oshii’s cyberpunk thriller was the first Japanese anime created for the international market and it became the biggest animated import in the US in years. Based on the manga by Masamune Shirow and recalling Blade Runner and the earlier anime hit Akira, Oshii’s dazzling science fiction work mixes adventure, mystery, and metaphysics in a future where humans are routinely augmented with bionics and electronic implants, and then follows it into the next evolutionary step.

Major Motoko Kusanagi, simply called Major for most of the film, is the leader of an elite strike team in Section 9, a security division in the Japanese government of “the not too distant future” that monitors cyberthreats, treason, and other government agencies. Her body is almost entirely artificial, a weapon in and of itself with optical camouflage technology, and her team includes the enhanced Batou, a loyal partner with a long history, and Togusa, who eschews most technology—the very reason she wants him on the team, especially as they take on a mysterious hacker known as The Puppetmaster. Infamous for breaking through the most impregnable firewalls and hacking sophisticated government and private databases, he’s now hacking people, rewriting memories and planting desires and motivations like they were programs.

More than twenty years after it debuted, Ghost in the Shell is still prescient in its own way. It belongs, in its own way, to the same conceptual universe as Blade Runner with its questions of what defines being human in a world of great technological potential, and it anticipates ideas explored in The Matrix films, which was in part inspired and informed by anime. Oshii had previously directed episodes of the Patlabor series and the two feature film spin-offs, both about the cops who take on the threats to and from technology in the near future. He dives headlong into the collision of material world and virtual world. Some of the source material must have been lost in his condensation of the complicated story—it runs a swift 83 minutes—and the existential leaps become a bit heady, but what remains makes for a dynamic science fiction mystery.

The hand drawn tradition of anime gets computerized boost in this production from Studio I.G., though not in the way the CGI would revolutionize the animation industry. It’s more of a hybrid, enhancing the hand drawn images with digital effects and using actual computer animation to imagine the visual displays of view screens and virtual surveillance. In the HD presentation of the film, these digital images reveal their pre-HD origins. The rest of the film looks terrific. The artwork and design is sleek and clean, full of fascinating detail and extreme motion, and the slightly choppy movement is nicely incorporated into the style of the film. More than 20 years after its original release, the complex thriller and sophisticated (and somewhat dense) narrative still impresses.

Ghost in the Shell: Stand Alone Complex – Seasons 1-2 (2002-2005), the serial spin-off of Ghost in the Shell, is actually a prequel, following the adventures of the covert cyber-S.W.A.T. team known as Section 9 that specializes in tech-crime and robotics gone wrong in a near future society where technology is not only a deadly tool for human criminals, but seems to be evolving in its own right. Major Motoko Kusanagi (“Isn’t great to work under a commander who actually knows what she’s doing?” praises her veteran partner Batou) leads a crack squad of agents, some cybernetically enhanced, other not, who all have their own specialties. Directed by Kenji Kamiyama (the animation director of the excellent Jin-Roh: The Wolf Brigade), it remains faithful to Mamoro Oshii’s film and to Masamune Shirow’s original manga. Though not quite as dark as its inspiration and somewhat hampered by the half-hour format, they are solid cyberpunk stories animated with style and designed and executed with a detail rarely seen outside of theatrical features. There are some pretty good stories through the 26 episodes.

Ghost in the Shell: 2.0 (2008) is not a sequel but revised edition of Mamoru Oshii’s 1995 original. Oshii has completely revised entire scenes (including the introductory sequence) with new CGI animation and re-recorded the soundtrack (with new voice recordings and a new score) for a more layered and sculpted audio (for the Japanese soundtrack only). The result is an odd hybrid of the original film and the slick 3D computer animation scenes, which is great for the cyber-imagery but looks more plastic and has less personality when it is used on the characters, or rather, character: the Major, the android leader of this special unit, is the only one reworked in CGI for a few select scenes. Better is the CG boost given to the original cel animation, which enhances and sharpens the imagery without actually replacing it. Given the choice, however, go with the 1995 version.

You can check it out on Hulu here (English language version)

Also on Blu-ray and DVD (with both Japanese and English language soundtracks) and on SVOD through Amazon Video, iTunes, GooglePlay and/or other services. Availability may vary by service.
Ghost In The Shell: Mondo Steelbook [Blu-ray]

The American live-action version starring Scarlett Johansson brought out a new Blu-ray release, essentially a rerelease of the 25th Anniversary Edition in a Mondo Steelbook case. It features Japanese (Dolby Digital 2.0) and English (Dolby 5.1 DTS-HD) soundtracks and optional English subtitles but none of the supplements featured on earlier DVD releases. The artwork and packaging is the selling point.