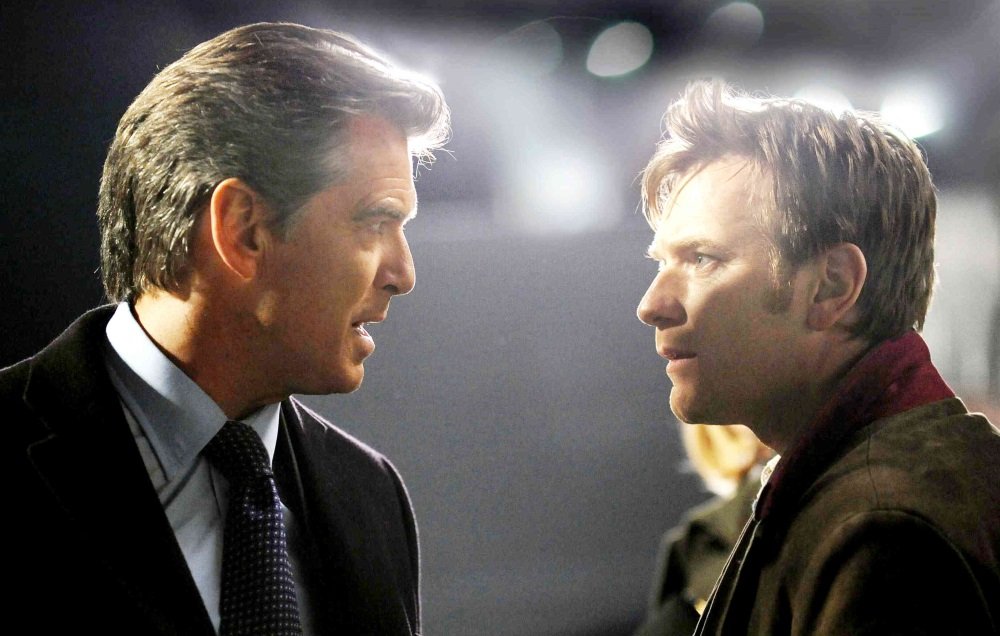 Ewan McGregor is The Ghost Writer (2010), a scribe-for-hire in the celebrity autobiography business who is contracted to rewrite the dry memoirs of a former British Prime Minister (Pierce Brosnan), in the smart, gripping, subtly Hitchcockian thriller from director Roman Polanski and author Robert Harris.

The writer has no other name in the film—he introduces himself with the perfectly accurate yet oddly ominous “I’m the ghost”—and in fact the more evocative The Ghost was the film’s European title. A fitting one too. He arrives at the PM’s American retreat in Martha’s Vineyard, modern block of concrete, steel, and glass that overlooks a chilly beach swallowed in the ever-present mist, and enters a compound that feels more like an exile in the Twilight Zone than a vacation home. (Germany substitutes for the New England coast—Polanski is still an exile from the U.S.—and the something-not-quite-right about the visual disconnect adds to the uneasy atmosphere.) His predecessor died under mysterious circumstances and he becomes a phantom detective haunting a film that is perpetually in fog, a shadow world of shrouded secrets that seem to actually exist on any map.

It’s those secrets that the ghost is trying to pry out of the reticent PM, a fierce political animal anxious to redefine a political legacy now tangled in his support the American invasion of the Middle East and his part in sanctioning torture, and he seeks answers from his wife (Olivia Coleman), an icy political animal bitter over the collapse of her husband’s political capital, and his American personal assistant (Kim Cattral), who is also likely his mistress. But this is no political tract. Their conversations are more like diplomatic negotiations and the Ghost’s forays outside the compound for answers (from Tom Wilkinson, James Belushi, and Eli Wallach) only complicate his search. The Ghost is a talented amateur in this company and McGregor embodies both parts of the equation: he’s dogged and he’s smart, but he’s still learning how this game is played. Is he discovering what he’s looking for, or what they want him to find?

The Ghost Writer is Polanski in top form, a master of subtly evocative imagery (with terrific support from cinematographer by Pawel Edelman, who also shot The Pianist) and moods and a filmmaker who turns mysteries into verbal chess matches between political grandmasters. His cool, controlled filmmaking offers a sleek surface that dissolves at the edges, populated by guarded characters and filled with wide shots of open spaces that nonetheless create a claustrophobic, ominous atmosphere. Alexandre Desplat’s ominous score evokes the work of Bernard Herrmann. It’s Polanski’s best film since The Pianist and his finest thriller in decades, and yet one of his least recognized. It’s well worth discovering.

It won four Cesar Awards in France and Polanski was awarded the Silver Bear for best director at the Berlin Film Festival.

Leaves Hulu at the end of May. Add to My Stuff.

and other services. Availability may vary by service.
The Ghost Writer [DVD]