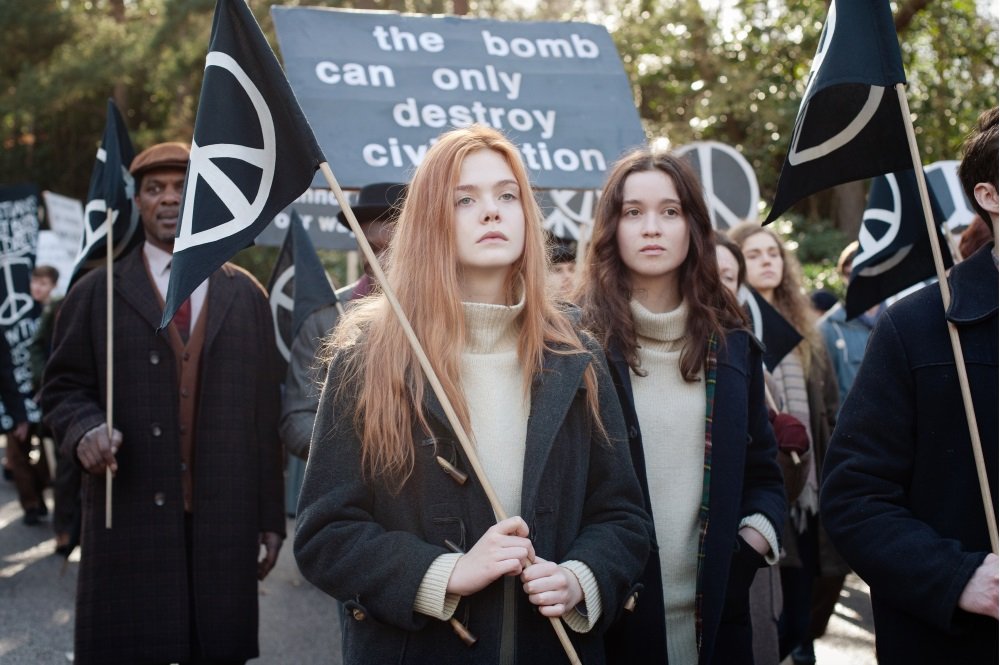 Ginger & Rosa (2012) offers something we don’t usually see in the movies: a sensitive and nuanced portrait of two teenage girls, best friends since childhood, growing up and growing apart as they forge separate identities and diverging personalities and interests.

It’s set in the volatile era of early 1960s London, before the Beatles but in the heart of the atomic age and the Cold War, and Elle Fanning, both effervescent and anxious as the idealistic Ginger, holds the center as the only child of frustrated mother (Christina Hendricks) and an activist father (Alessandro Nivola). Ginger’s whole being is rocked as she grows up and discovers the complicated people under the idealized (and dismissive) assumptions she has made about parents. Dad served time during World War II for refusing to fight as a conscientious objector and he constantly brings it up as some kind of medal to prove his moral commitment to his convictions, but mostly to justify his almost total abandonment of his family.

Hendricks’ British accent is slippery at best but she’s completely convincing as a frustrated artist who has spent her life sacrificing her dreams for others. Alice Englert plays the best friend Rosa, whose willfulness proves as much weakness as strength.

After a career defined by cinematic experimentation, director Sally Potter trades affectation and stylistic experimentation for not-so-simple intimacy and empathy, helped of course by rich performances from her cast, young and not-so-young. It makes for a moving film that doesn’t fall back on familiar storytelling.

It was nominated for three British Independent Film Awards

Add to My List on HBO Max or watch free on Kanopy , which is available through most public and college library systems.

, iTunes, GooglePlay, Fandango, Vudu and/or other services. Availability may vary by service.
Ginger and Rosa [DVD]