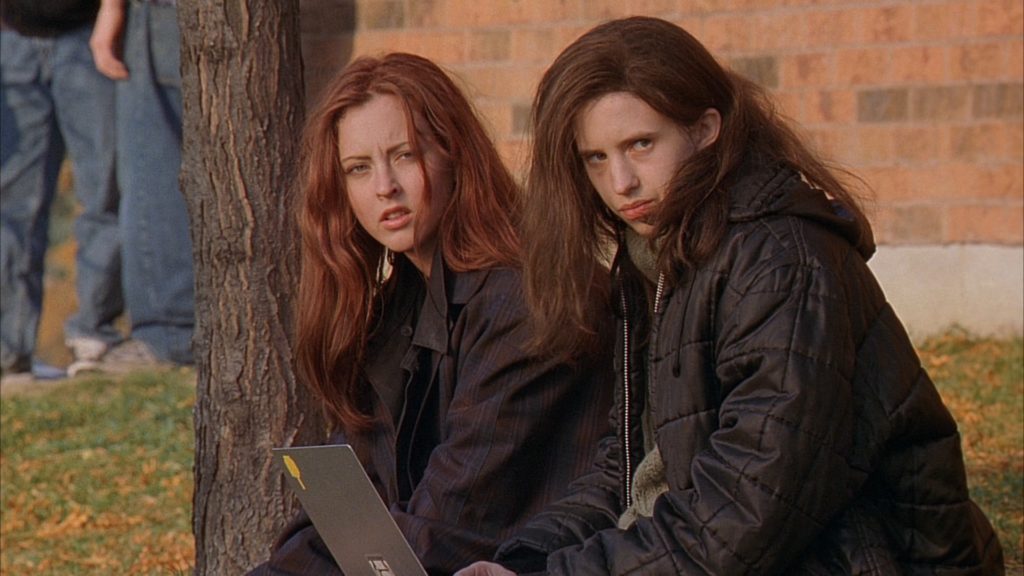 Ginger Snaps (2001) is one of the best horror films of the new millennium that hasn’t really gotten its due.

Gloomy teenage goth girls Brigitte (Emily Perkins), “the frumpy one,” and Ginger (Katharine Isabelle), “the pretty one,” are more than sisters. Only a year apart, and both “late” in developing, they have bonded as best friends and social outcasts, and made a pact to die together before puberty hits. The gory mock deaths they stage for a series of truly disturbed Polaroids are like demented dress rehearsals.

When elder sister Ginger is mauled by “the Beast of Bailey Downs,” it’s no coincidence that it’s the very night of her first period. Ginger’s body starts changing in ways she’s not remotely prepared for–hair sprouting in spiky tufts all over, feral teeth, a hearty craving for flesh and physical contact with previously taboo boys. “What about hair that wasn’t there before, and pain?” demands an incredulous Brigitte of the school nurse, searching for answers to Ginger’s sudden transformation. The nurse smiles benignly, “It comes with the territory.” It’s a werewolf virus as STD, and Ginger is only too happy to pass it on.

Think Carrie by way of A Canadian Werewolf in Suburbia. Director John Fawcett layers his marvelously evocative and inventive metaphor for the changes brought on by puberty with black humor and tender sisterly solidarity. There’s a nice undercurrent of black humor which mines the absurdities of it from an adolescent perspective, but this is no Buffy the Vampire Slayer. It satisfies the expectations—blood, bodies, sex, smart dialogue, and good old fashioned monster movie scares—and then twists them into the most inspired piece of female-centered horror since A Company of Wolves. This time Little Red Riding Hood and the wolf are one and the same, and she kind of likes it.

Mimi Rogers co-stars as their dotty Mom whose response to it all is unexpectedly sensitive and sacrificial: blood and blood ties have never been more evocative.

Shout Factory releases the Blu-ray debut on a combo pack set with the new hour-long-plus documentary “Ginger Snaps: Blood, Teeth and Fur” featuring new interviews with actors Emily Perkins and Jesse Moss and members of the production team and a new half-hour “Women in Horror” panel discussion with a quartet of women writers and filmmakers, along with supplements carried over from previous disc releases, including two commentary tracks (by director John Fawcett and writer Karen Walton), deleted scenes with optional filmmaker commentary, archival featurettes, and cast auditions and rehearsals.