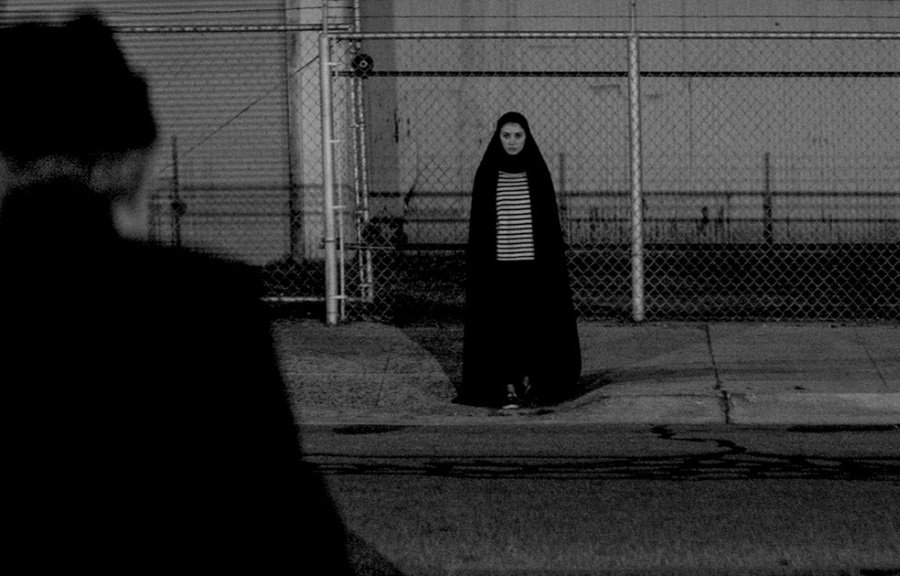 The Girl (as she is identified in the credits), played by Sheila Vand (Argo), walks the streets (and at one point rides a purloined skateboard) of the fictional Bad City modestly and properly covered in a chador, but underneath she wears a striped blouse that could have been borrowed from Jean Seberg in Breathless and her basement room is adorned in pop music posters. Arash (Arash Marandi) seems to model himself on James Dean, right down to the white T-shirt, black leather jacket and blue jeans. Of course they cross paths and The Girl, who exercises a measure of morality in choosing her meals, allows him to woo her. Why not? They’ve both already robbed the same gangster (she took jewelry and his CDs, he grabbed the cash and the drugs).

Yes, Bad City is a bad place and the film, shot in high-contrast black-and-white widescreen almost entirely at night, is like an Iranian film noir by way of a crime drama with supernatural edges. Amirpour fills the screen with a sense of emptiness and ominousness: a stripped-away landscape, devoid of bystanders (giving it a ghost town atmosphere) and prowled by predators, criminals, hookers, and other society drop-outs. It’s as much crime thriller as horror film.

It was produced in the United States, with night-shrouded California locations transformed into the suburbs and industrial outskirts of an Iranian town and a cast speaking in Farsi, and it was financed in a decidedly American manner: production funds were raised in an IndieGoGo campaign. This is a film that justifies that model. You may also recognize two rather familiar Persian-American faces in supporting roles: Marshall Manesh (Ranjit in How I Met Your Mother) and Pej Vahdat (Arastoo Vaziri in Bones).

It won’t get a release in Iran, at least in current form (thanks to brief nudity), but it had a strong festival run and it landed a stateside release in theaters.

Kanopy is available through most public and college library systems.

Also on Blu-ray and DVD:
A Girl Walks Home Alone at Night [DVD]