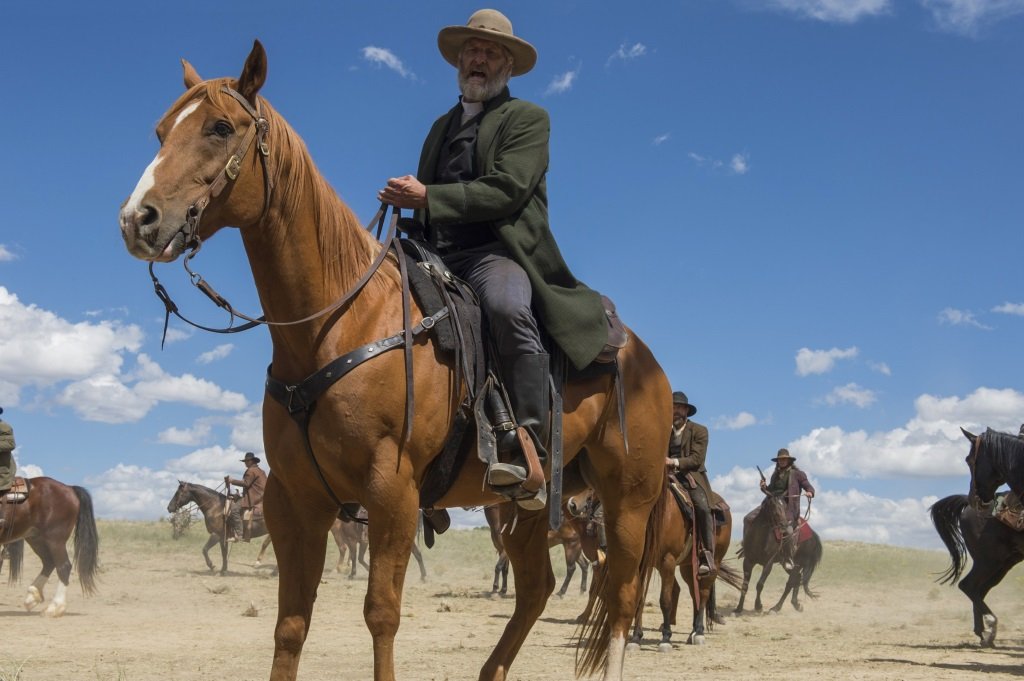 The western mini-series Godless stars Michelle Dockery as the widower in a frontier town of women and Jeff Daniels as a ruthless outlaw on the trail of his runaway protégé (Jack O’Connell), who betrayed his mentor and takes refuge in the distaff town. Oscar-nominated screenwriter Scott Frank writes and directs the seven-episode series for Netflix.

Mike Hale, writing for The New York Times, says that the series “comes at you hard” and offers a little bit of everything along the way to its conclusion. “If he doesn’t achieve the visual or narrative poetry of the filmmakers he’s riffing on — the John Fords, Howard Hawkses and Robert Altmans — he still gives you plenty to look at, and it’s never boring,” he continues. “Mr. Frank appears more interested in the moral allegory mandated by the title, in which the frontier is a place of chaos where no god is looking out for anyone.”

Seven episodes on Netflix. Queue it up!

Hulu launches its first superhero series with Marvel’s Runaways, about six teenagers in Los Angeles who sneak into a secret ceremony in a dungeon temple hidden beneath a SoCal estate and find out that their parents just may be supervillains. That’s the premise of both the original comic book, created by Brian K. Vaughan and Adrian Alphona, and the Hulu series developed by Josh Schwartz and Stephanie Savage (of The O.C. and Gossip Girl), which plays up the mystery and expands the role of the parents in the story.

“Runaways is far more ambitious than your standard teen drama fare, not just introducing its six lead characters relatively quickly, but establishing them as more complex than can be described by a simple label,” writes Liz Shannon Miller for IndieWire. “Meanwhile, the show also doesn’t fail to feature their very different sets of parents, who are already clearly flawed individuals, before the show reveals their hidden motivations.”

Also on Netflix: Spike Lee updates his debut feature into the modern romantic comedy She’s Gotta Have It and directs all ten episodes of the debut season. Netflix also has the original 1986 feature She’s Gotta Have It (1986, R) the film that launched Spike’s career (reviewed on Stream On Demand here).

Viola Davis won an Academy Award for her performance opposite Denzel Washington in Fences (2016, PG-13), adapted from the play by August Wilson and featuring the cast of the Tony Award-winning Broadway revival. It’s now on Amazon Prime and Hulu. Reviewed on Stream On Demand here.

Kumail Nanjiani and Zoe Kazan star in The Big Sick (2017, R), the hit indie comedy by Nanjiani and his wife Emily V. Gordon based on their strange, true, and dramatic story of their courtship. You can stream it on Amazon Prime.

Ryan Reynolds is The Hitman’s Bodyguard (2017, R), hired to protect the star witness (Samuel L. Jackson) in a big trial, in the hit action comedy. Also on DVD and Blu-ray and at Redbox.

Dane DeHaan and Cara Delevingne are interstellar special agents in the sci-fi fantasy Valerian and the City of a Thousand Planets (France, 2017, PG-13), based on the French graphic novel. Also on DVD and Blu-ray and at Redbox.

The scrappy indie drama Good Time (2017, R) stars Robert Pattinson as a bank robber trying hustle up the bail to get his brother out of prison.

Arriving On Demand before theaters is the Agatha Christie murder mystery Crooked House (2017, PG-13) with Glenn Close and Christina Hendricks and the crime thriller Hangman (2017, R) with Al Pacino and Karl Urban.

Alec Baldwin voices The Boss Baby (2017, PG) in the animated comedy based on the illustrated book by Marla Frazee

Dave Bautista and Brittany Snow team up to survive a new Civil War in Bushwick (2017, not rated) and Taylor Lautner is bike messenger on the run from the mob in Tracers (2015, PG-13).

Kid stuff: Beat Bugs: All Together Now is an animated special featuring the music of the Beatles.

True stories: former Labor Secretary Robert Reich guides us through Saving Capitalism (2017, not rated) and Cuba and the Cameraman (2017, not rated) chronicles 45 years of history through the lens of Jon Alpert.

Is it too early for Christmas programs? Mariah Carey’s All I Want for Christmas is You (2017, G) turns the Christmas song into an animated feature while the dark comedy Rare Exports: A Christmas Tale (Finland, 2010, R, with subtitles) has a wild idea about the origins of Santa and his elves.

Melanie Lynskey stars in the indie romantic comedies We’ll Never Have Paris (2014, R) with Simon Helberg and Hello, I Must Be Going (2012, R) with Christopher Abbott.

True stories: 21 Years: Richard Linklater (2014, not rated) looks at the career of the acclaimed filmmaker.

True Stories: Whose Streets? (2017, R) looks at the events in Ferguson, Missouri in 2014 from the point of view of the folks on the streets and Whitey (1980, R) tells the story of notorious Boston gangster Whitey Bulger.

Matt Damon and Andy Lau star in the Chinese-U.S. co-production The Great Wall (2017, PG-13, English and Chinese with subtitles), a mix of historical epic and fantasy.

FilmStruck surveys the career of Italian master Luchino Visconti through seven films, including his historical epic The Leopard (Italy, 1963, with subtitles), and the sixties films of John Frankenheimer with five films, including the Oscar-nominated dramas The Birdman of Alcatraz (1962) and Seven Days in May (1964), and coincidentally spotlights the collaborations of both filmmakers with Burt Lancaster.